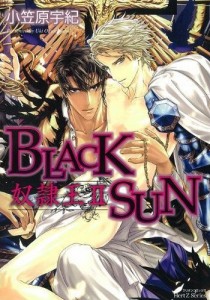 Hello, sweeties! Welcome to another FFAF post. As promised I've written my second review on Black Sun, or should I say, Black Sun 2, which is a continuation to the series. Written and illustrated by Uki Ogasawara, this intriguing story started with a war, humiliation and rape, and the kidnapping of one monastic knight, Leonard. Jamal, the general and underling to the sultan, is the kidnapper and bringer of Leonard's woes. But as I soon discovered in the second installment, Jamal isn't so much the perpetrator, but a victim himself; slave to the sultan and his heirs to the throne. Not that you can't see the story heading that direction in Black Sun, you can. Jamal is everyone's beating post whenever the shit hits the fan. And, of course, Leonard comes in a close second, when his new-found lover isn't around to beat. 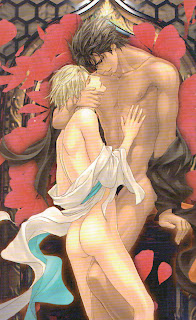 The setting, the sultan's kingdom in the Middle East, and genre, historical, erotic yaoi with characters of mixed racial background. In the first scene, Leonard is daydreaming about Jamal from his prison cell, contemplating the sex and their relationship, when another monastic knight appears, Lord De La Tour. In the second scene Jamal is wrapped in conversation with Isaac. They discuss Jamal's position under the sultan, and how to get Leonard back; the lovers have been separated. While they talk an envoy from the sultan shows up, and gives Jamal a box with a skull inside (supposedly Leonard's), and a new recruit to train, a young, blond haired boy by the name of Effendi. The sultan wants Jamal to believe Leonard is dead, and sends Effendi as a sexual substitute. At this point it's obvious Jamal's in love with Leonard. Notice I said 'love'. Which isn't what I sensed from Jamal in the first manga. While Jamal talks to Effendi, Lord De La Tour wants Leonard to sell out his captor, to become a knight again, but when Leonard refuses, Lord De La Tour rapes him. I felt Lord Asshole (yes, you read correctly) had a power tripping moment, and envy was the driving force. Anyway, from there the plot thickens. Jamal has figured out Leonard isn't dead, and goes to speak with the sultan, which is a no-no. He's supposed to request to see the king, not just show up. Then Lord De La Tour faces off against Jamal. Leonard is brought to the fight. After the fight, Jamal escapes with Leonard.

Okay, sweeties, this where my synopsis ends because I don't want to spoil the entire story. But I think you get the gist of where the plot is leading. Basically, Jamal ends up battling everyone in order to keep Leonard; and you guessed it, the general's actions are a declaration of his love.

This is a first for me, the first time I can honestly say, in my humble opinion, the sequel is better than the original. Black Sun 2 is really good; the characters mature, the plot is much more interesting, and the emotions are distinct, not watered down by too much sex and very little explanation. Jamal's feelings are clear, his objective clear, and this is no different from Leonard, he's just as much in love with Jamal. The men have a purpose and they fulfill it.

I felt very satisfied with Black Sun 2. It was one of those reads where you smile at the end, and say to yourself, that was pretty good. Though I also felt the story had been left in limbo and could easily continue. Perhaps, a Black Sun 3? Anyway, the sex is hot, the characters beautiful, and the story, quite decent. I give Black Sun 2 4.5 flames!