FOR LOVE OF A GYPSY LASS - JULIET CHASTAIN 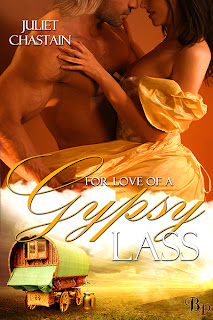 All right, I don't usually say it, but I do love the cover, Juliet. The faint hint of a nipple, the sexy man clutching her dress...yum. Whoever created it, did a fantastic job. Kudos! And, he can wrap me in his arms any time. *wipes the drool away* LOL Welcome to BRB, sweeties! Today's guest is historical erotic romance author Juliet Chastain!
Okay hun, tell us about yourself!
Back in sixth grade, inspired by a wall calendar with photographs of kittens (one of my most treasured possessions) I wrote a sad story about a couple of kittens. This tragic tale made me cry and and got me an “A” from my teacher.
Along the way, I switched focus, so to speak, and became a photographer. And here I am again after fifteen years of photographing fashion, writing again. This time my stories have lots of steamy romance and happy endings. No kittens (so far) and no sad tears.

Where and/or how do you find the greatest inspiration?
I wish I knew the answer. It either comes or—groan—it doesn't.
What made you chose to write erotic literature in particular? And is there any other genre you’d like to write? And if so, why?
Yes, I have a couple of mysteries sitting around and I'm working on a snarky wild west story. But I cannot tell you why those genres—or why erotic romance.
What’s the hardest part of a novel for you to write: Beginning, middle and/or end? Why?
Sometimes I get lost and flounder about a good bit in the middle, so that's the hardest. The beginning is a piece of cake until I go to revise and find it's not the wonderful start of the story I thought it was. As for the end—it often comes as a surprise to me—even if I think I know what it's going to be.
Has your own life influenced your novels? And if so, how?
In a very round-about way, my life influences my work. For example I've always been very curious about Gypsies—Roma or Romani, as they call themselves, Those rather mysterious people came from India to Europe about a thousand years ago and lived a wanderer's existence and kept to their own ways for generations.
My fascination began when I was a small child in Africa. One evening my dad was driving somewhere with me and we passed a little Romani fair, a few lights in the darkness, music, some horses, a little merry-go-round. Very enticing to a small child who lived on a farm in the middle of nowhere. I wanted desperately to go to the fair, but my dad said we couldn't and that he believed Gypsies were thieves (this being pre P.C.).
Indeed the next morning all out chickens were gone, every single one and the dogs hadn't barked and no one had heard a thing. If you know anything about chickens you know you can't just pick them up and tiptoe away because they'd start squawking and pecking you like mad. My parents were not pleased, but I was thrilled. It was often my job to feed the chickens, and I was rather scared of them. But mostly I was awed. How had the Gypsies done that? It seemed magical.

Now I am in the middle of writing a series of short sexy stories featuring Gypsies during the Regency period. There will be one coming out every month or two with Breathless Press.

Writing sex/romantic scenes can be a challenge for some authors. Do you find it difficult? If yes, how do you compensate? If no, where do you draw your inspiration?
I think I'll avoid the question of where my inspiration comes from, but I have noticed people looking curiously at my boyfriend since I started writing erotic romance.
The toughest thing about writing this kind of thing is trying to make it sexy and appealing when there just don't seem to be enough romantic words for certain body parts although there are plenty of less-romantic ones.
Do you have a method you use to write the sensual parts? Do you prefer the sex to be open and bold? Or left to the imagination?
I leave the sex scenes for last because by then I've learned how the story ends and I know my characters very well. As for bold or not—I can go either way.
Who is your favourite character, which you’ve created? And why?
I'm pretty fond of them all, but my favorite might be the Captain in The Captain and the Courtesan. He's just such a decent, nice guy. Awful, isn't it—that makes him sound uninteresting. Of course he's also brave and sexy.
Tell us about your newest release.
For Love of a Gypsy Lass, is my second book in the gypsy Lovers series. We have a bored-out-of-his-skull English nobleman, Lord Harry Beresford who has simply had it with his luxurious and dull existence and the noble and dull ladies he is supposed to court. He falls hard for an itinerant Gypsy singer called Talaitha Grey. He assumes she can be easily seduced by his wealth and prestige, but to his surprise she's not the least bit interested in any of that—although she is, against her will, attracted to the man behind it all.

Somehow these two must find their way to happily ever after—and they do so in unexpected ways.

Just for fun–
What is your favourite colour? blue
Which do you prefer a great hero or a great villain? hero
What is your favourite movie? And why?
Black Orpheus even though it is rather sad. It's a tender love story, a re-telling of the Orpheus myth in twentieth century Brazil. Wonderful Bossa Nova music.
Website: julietchastain.com

For Love of A Gypsy Lass
Blurb:
Lord Harry Beresford is used to having everything his way— that is, until he falls in love with Gypsy singer Talaitha Grey.  Proud Talaitha is as unimpressed by his title as she is by his wealth, but can she fight her powerful attraction to the man behind those things?
Excerpt:
Carrying a tambourine decorated with silk ribbons that were definitely showing their age, Talaitha climbed onto the stage with Cambio. She saw the lord standing a few feet away, leaning with one arm on an ancient apple tree with his thin friend beside him. His broad chest and narrow waist showed to advantage. He was a handsome man. Unsmiling, he nodded at her and reluctantly she nodded back.
Against her will, liquid fire filled her belly. She commanded her body to stop, this man was not for the likes of her, but her body would not listen. She felt a savage desire for him. Had he cast a spell on her?
As she sang the songs the lord requested, she tried to smile in his direction but she felt so resentful and so confused. When she looked at him the liquid fire crept into her veins and flowed right down to the tips of her toes and the ends of her fingertips. She felt the heat in her face. Inwardly she cursed herself.
When she finished, her cousin, Delilah, climbed on stage beside her and they shook their tambourines to signal that the entertainment was about to change.
Cambio stroked his guitar. Delilah began the intricate dance steps and after a minute Talaitha joined her. It was a dance their mothers had taught them, but they knew no name for it. Delilah wore a close-fitting green blouse and skirt of multicolored layers and Talaitha, in her deep yellow dress, thought herself no match, but rather a foil to her colorfully attired cousin.
Might the Gadjo decide he preferred Delilah? Viscous jealousy swept over her—jealousy of Delilah's generously curvaceous figure and of the grace with which she moved. She glanced over to where the Gadjo stood. He was not looking at Delilah, but at herself. Again her rebellious body allowed the flames to spread like wildfire through her, but this time she did not fight it.
Talaitha gave herself to the dance, allowing her unreasonable passion for him to overcome her as she glided and turned, following the steps. She was aware of the sway of her own hips, the twist of her waist, the way her breasts lifted as she took her arms above her head and touched her fingers to the tambourine.
She could feel her thighs brush gently one against the other, the delicious slip and slide of her dress against her skin. Even the touch of the frayed silk ribbons of the tambourine against her naked arms was arousing.
She could feel his eyes devouring her, though she would not, did not, dare look directly at him. She could feel his desire on her skin, on her breasts, even in that most secret part of her between her legs.
She let her own desire mix with his to move her, to consume her. When she looked out at the audience she saw an answering desire obvious on the face of every man there, and the women's faces were flushed.

Purchase Link: BreathlessPress | Amazon | All Romance eBooks | Bookstrand | 1 Place for Romance
Thank you for stopping by, Juliet. I wish you the best of success!
*Just a few Quickies!
I'll be updating the announcements panel this weekend for the month of June. Can you believe it's June already. Seriously, where does the time go? Anyway, sweeties have a wonderful weekend. I'm wishing for sunshine, my poor tomato plants desperately need it.
And, to Anonymous, my purchase of Black Sun 2 finally came in the mail, I'm reading it, and I shall post my review on the next FFAF!
Happy Yaoi Hunting!
Blak Rayne
Posted by Blak Rayne Books Blog at 10:33 PM