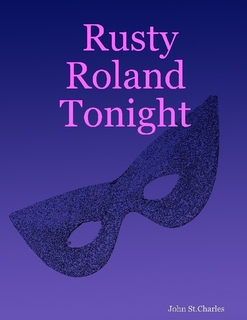 Big star or gay bar bimbo?
Right! That's the stuff! I've gotta announce you: (STEPS UP TO MIKE)
And now - a man whose name is synonymous with homosexuality - Rusty Roland Tonight! (MIMIC WATCHING RUSTY DIVING OFF STAGE)
Look at him go, willya? Didja ever see a kid so hungry for cock?
Okay, everybody: please have yourselves unzipped and read by the time Rusty gets to you.
However, those of you who would prefer to make use of Rusty's rearend, please form a line behind him...Now please don't push or shove - Everyone will receive an orgasm!

Purchase Link: http://www.lulu.com/spotlight/jstc2002
Great interview, John! Thank you again for being here. I wish you best of success for your novel and all your projects in the future.
Blak Rayne