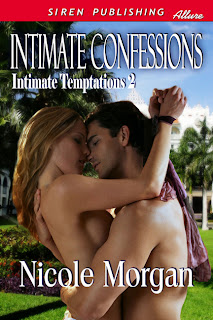 Where and/or how do you find the greatest inspiration?
Gosh that is really hard to say. I get my inspiration from various places. Whether it be music, images, amazing scenery or just a feeling inside. There is always a muse lurking somewhere in our lives, we just have to be willing to open our senses and listen to what they’re saying.

Which appears first when contemplating a new project: character, plot, or title?
That’s really hard to say. For me it may be a myriad of things. Sometimes I’ll start with a premise, and other times a particular type of character. Also, I tend to pull ideas from other stories I’ve told. For instance, if I’ve written a book and wondered “what if” the story had gone another route, then I’ll tell a different story with new characters in the next book. Life isn’t always predictable, so neither should our stories be.

What’s the hardest part of a novel for you to write: beginning, middle, or end? Why?
For me I’d have to say it’s the end. Especially when I finally realize where I want the story to go. You can’t just rush things. So, I tend to fill in a lot of obstacles and daily life to get the couple to where they are finally able to have that happily ever after. Or at least happy for now. Sometimes as an author you have to learn to slow down and learn patience.

Has your own life influenced your novels? And if so, how?
Very much so! As a woman I have realized the many contradictions of a woman. We say we want one thing, but push and pull men in all sorts of different directions. Yes I know, shocking right? Women are complicated. Who knew, right? LOL. Well, I try to put real women, complicated women in my stories. Ones that are just as annoying to men as men can be to women. Because after all, no matter how much I would love to say it’s always the man’s fault. Let’s face it… it’s not. LOL

Writing sex/romantic scenes can be a challenge for some authors. Do you find it difficult? If yes, how do you compensate? If no, where do you draw your inspiration?
It can be difficult at times. Finding new words, descriptions and adjectives to explore something so physical with only words. I’ve found that if I close my eyes and literally try to put myself in the moment, it helps me envision something. Whereas before, I might not have been able to. Sounds simplistic, but it works.

Do you have a method you use to write the sensual parts? Do you prefer the sex to be open and bold? Or left to the imagination?
I like the descriptive words to be imaginative, but I don’t hold back on verbiage. Some words, while considered crass in everyday conversation may also be quite beautiful when two people are connecting on such a primal level.

Who is your favourite character, which you’ve created? And why?
Oh this is NOT a fair question. I love so many of my characters. My favorite three leading men would be: Jack (Sweet Redemption) Rex (Sweet Salvation) and Nick (Sweet Affliction) – All 3 of those books are in my Sweet Awakenings series which centers on Navy SEALs.

What is your favourite colour(s)?
Hmm… I guess it depends what we’re talking about. Assuming you mean lingerie I’d have to go with black, white or just about any color but red. Red doesn’t work with my fair skin tone.

Which do you prefer a great hero or a great villain?
I like a great hero! A villain can be found in many forms, but I’ll always focus my attention more on the depth of a hero.

What is your favourite movie? And why?
Favorite of all time? Geesh, I am not sure. A few all time favs would be: The Negotiator because I love the way Samuel L. Jackson goes to such lengths to not only expose the truth but to make sure he isn’t convicted of a crime he didn’t commit. ConAir because John Malkovich is an outstanding actor and the dynamics between him and Nicolas Cage meld well together.  And lastly The Notebook because it’s the classic true love story. Despite the obstacles the two are handed, they still find a way back to one another.

If you could be anyone in the world who would it be? And why?
I already am who I want to be, ME. As cheesy as it sounds, I like me.  With all my imperfections and crazy women ways, I’m a diamond in the rough. Just need to find the right man to see my inner beauty.

Where do you see your writing career in the next five to ten years?
Hopefully it will be a huge success. I’ve done more writing in this past year than I have in the previous and I plan to keep on that path. One day I hope to live on a beach somewhere, without a care in the world other than writing and enjoying life.

When Derek met Sandi, all the pieces of his life fell into place, but the young and inexperienced Sandi wanted desperately to discover who she was and pushed Derek away in search of something she was missing.
Devastated from losing Sandi, Derek arrives at Pleasure Seekers, an estate which specializes in play of the adult variety, anxious to start his new life. A chance encounter with the very woman he was trying to forget brings his plans to a screeching halt.
Angry and wanting nothing more than to hurt her the way she had him, he sets out to do just that. Only Sandi has changed in their time apart and is willing to do anything to get him back in her life again.
Old wounds and intimate confessions come to the surface as the couple faces the choice of forgiving or forgetting the only person they’ve ever loved.

His eyes closed, and his head dropped back as he absorbed the first warm swipe of her tongue. The heat that touch brought almost set him afire. Attempting to calm his breathing, he still hadn’t been prepared for what he felt when her soft, luscious lips wrapped around him and slid from the tip down to the base.

Holy shit! He was going to come. He was within seconds of shooting his seed down her throat, something he had never done to her.

Hell, if he had a choice though, he couldn’t pull her sweet mouth off of his cock if the Apocalypse was upon them.

“That’s it, baby.” He wrapped his hands at the base of her skull and began guiding her, while thrusting into her long slides up and down on him. Was he doing this? She wasn’t just giving him head. He was fucking her mouth.
Damn, it was so good.
Every lick, suck, and motion brought him closer to the point of no return. He wanted to warn her. There was a time when he’d loved her more than anything in this world. He should warn her.
No. Angrily, he shook his head at even having the thought. No way was he going to warn her of such a minor event when she was here to learn. When she was clearly so eager for it, and especially not since she never warned him before she ripped his heart out.
In that moment, a rage consumed him. She had destroyed him. He wouldn’t punish her, but he would teach her to be his submissive. She would learn that he was the one in control. Not her. Never again would she control any aspect of their relationship.
Thrusting faster, deeper, and harder, he was now hitting the back of her throat. The sensation of how amazing it felt rocked him to the core.
She wasn’t stopping, either. She was relaxing her throat muscles and just letting him use her.
Damn her! Damn her for making it feel so good. He couldn’t take it anymore. With a guttural howl that echoed in the room, he came into her mouth, thrusting with every spurt and holding her head to him, not wanting to give her the chance to pull away, yet realizing she wasn’t even trying. He could hear her swallowing.
Purchase Link: http://www.bookstrand.com/intimate-confessions

Thank you so much for doing the interview, Nicole. It was great to have you here, and I wish you the greatest of success in the future. ~ Blak Rayne
Posted by Blak Rayne Books Blog at 10:15 PM