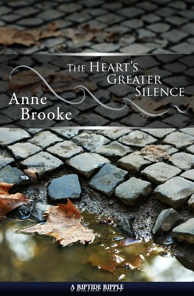 Where and/or how do you find the greatest inspiration?
My greatest inspiration is my husband. I never wrote a thing before I met him. He gives me a lot more confidence and self-belief than I ever thought I'd have, and he's a pretty great guy. I also find a lot of inspiration in what people do and say, and also in my dreams. Sometimes I can dream the beginning of a story, and when I wake up I have to write it down so I can work on it later and see how it ends.

Which appears first when contemplating a new project: A character, the plot and/or the title?
Usually the characters. I'll find myself thinking about them and working out stories in my head for them, and after a while I'll start writing them down and seeing where they go. I'm often hazy on plot when I begin, but the characters reveal that as I go along. If I try to force them into something, they'll soon let me know, believe me! Titles are harder, and often get fixed quite late on in the story. Sometimes they'll be changed by the publisher too, as it might be too similar to a title they already have or they'll think it's not catchy enough. I'm always grateful when someone comes up with a better one.

What’s the hardest part of a novel for you to write: Beginning, middle and/or end? Why?
The middle. Definitely the middle! Beginnings are fairly easy, and often I'll write a draft of the ending early on in the process (though it sometimes changes when I finally get to it), but I do struggle with getting the middle of a story right. It can go off at a tangent and I'm not sure whether to follow it or nip it in the bud. Or I can get carried away with a strand or a theme and then realize it's taken over to the detriment of everything else, and I have to do a heck of a lot of cutting, and corresponding building up of other scenes. So, yes, it's hard work, but it's an amazing feeling when things finally fall into place.

Has your own life influenced your novels? And if so, how?
I think everything that happens eventually finds its way somehow or other into one of my stories. I've written two gay thrillers (A DangerousMan, and The Bones ofSummer) based in London where I lived for some time, and where I actually met my husband. My gay romance, The Hit List, has an events co-ordinator (a job I have experience of) as the main character and is based in the countryside where I grew up. Other thrillers have also been based in places I've lived, and some of the experiences are also mine. So it all comes out in the wash, that's for sure! One of my most recent short stories, TheHeart's Greater Silence, takes place in a church and involves a member of the clergy - and I've been an Anglican churchgoer for years so the setting is very familiar.

Writing sex/romantic scenes can be a challenge for some authors. Do you find it difficult? If yes, how do you compensate? If no, where do you draw your inspiration?
I do love writing the sex scenes - it's a wonderful opportunity to get intimate with a character and to really see what makes them tick, both for the writer and the reader. My inspiration comes from personal experience, articles and books I've read, programmes I've watched and people I've talked to. It also, first and foremost, has to come from the heart of the character I'm writing - I have to write it as he or she sees and experiences it if it's going to be able to sing.

Do you have a method you use to write the sensual parts? Do you prefer the sex to be open and bold? Or left to the imagination?
The method - if it can be called that - is to experience everything from the point of view of the character you're writing about. On the whole, I write about characters who are very open about their needs and desires, and therefore the sexual descriptions are very direct. But I have written about people who are more circumspect in how they experience their sexuality and so in those cases - and in order to stay true to the character - then the sex is best left to the imagination. For instance, my gay mind-reader Simon in fantasy novel, The Gifting, finds the whole experience so overwhelming that he can only describe it in terms of colour and music - which is partly his mental safety mechanism kicking in. He’s just too in love with the man he’s with for it to be otherwise.

Who is your favourite character, which you’ve created? And why?
I'm very fond of Liam in my m/m/m Delaneys series. He's very cheeky and has got a great sense of humour, as well as an open enjoyment of sex. Mind you, he needs all these attributes in order to keep tabs on his two lovers, the dangerous Delaney twins. They're certainly a handful!

Tell us about your newest release.
TheHeart's Greater Silence is a gay contemporary story about the choice one man has to make between two very different lovers.

Mark isn't sure he believes in love, especially when he's torn between two very different men: his reliable boyfriend, Craig, and his illicit lover and priest, Richard. Mark knows what he should do, but he can't bring himself to give Richard up. The sex with Richard is unlike anything he's ever known with Craig, and he hungers for it as much as - if not more than - the truer intimacy he finds in his boyfriend's arms.
When Craig discovers his betrayal, Mark is forced to look at his life more closely, but the path to self-knowledge is never an easy one. Richard seeks the way back to God, but Mark finds no solace there. Can he ever discover the truth of his own soul, or is he too afraid of what he will - or won't - find inside his heart?
Excerpt:

The vestry was cool as Richard stripped me until I was naked and unashamed. It was what I’d come here for. Talking was irrelevant. From somewhere, a draught made me shiver, and I gazed at him as his face came nearer to mine. The movement sent everything slightly out of focus, but I didn’t close my eyes. I wanted to see.
He lay me down gently on the tiled floor, pushing one of the vestment sets under my head as a makeshift pillow before kissing my mouth. Not a single deep kiss as we’d shared before, but light warm touches that made my lips tingle and my cock stiffen even further. He’d never had to do much to excite me. The feeling lay always under the surface, waiting for the slightest attention he might give me. I groaned, wanting more, wanting anything, but Richard merely smiled against my mouth and continued his slow, inevitable seduction. His lips moved from my mouth to my neck, and I stretched my head upwards to allow him the access he wanted.
“It’s okay,” he whispered, his breath warm and comforting. “Just relax and let me have my way with you. It’s what we both need.”
I groaned again, wanting to fight his mastery over me and to fall headlong into it at the same time. My mind shimmered with his nearness and I couldn’t even think of what words to say, let alone say them. I relaxed as he asked me to and concentrated on how his lips made me feel as they brushed against my body.
When he stretched his fingers over my chest and withdrew from me to look into my eyes, I swallowed; any sound from me would only break the bond between us, whatever it might be.
After a while, as I knew he would, he continued with his strokes and kisses. His mouth drifted over my shoulders whilst his fingers feathered through my chest hair. He didn’t pull, didn’t make me gasp with that blissful shadow of pain, though I wanted him to.
When at last he reached my cock, he touched me there with neither hand nor lips but only stroked a pattern around my base, murmuring something I couldn’t understand. I wanted to curse at him or shout, but it would do no good. Richard did what he wanted, and all I could take from him was the pleasure he gave.
Without warning, he withdrew, leaving me cold and panting. Before I could object, he lifted me up and turned me over onto all fours, pulling the vestments down and giving my knees something to rest on. I heard the sound of Richard opening one of my condoms and wondered, stupidly, how I might explain the lack of it to Craig, before remembering that opportunity would never come. But then even such small and piercing reality vanished as I felt the tip of Richard’s slicked-up cock nestle against my arsehole.

What is your favourite colour(s)?
Green. Definitely green - I love it! Also, depending on the shade, it tends to suit my hair colour, so I feel quite comfortable in it too.
Which do you prefer a great hero or a great villain?
Oh, I do love a villain - they're just so sexy! Usually far sexier than the hero is, as well. Plus you have the hope that they might see the error of their ways in the end so become less villainous - which is great just as long as they don't become too good. That would be sad ...
What is your favourite movie? And why?
This is a wildcard answer, but I really love Seven Brides for Seven Brothers. The songs are great, and Howard Keel in the main role is just so hot! Plus I'm a romantic at heart, and how can you go wrong with all those weddings at the end?...
If you could be anyone in the world who would it be? And why?
I'd love to be Ginger Rogers. She had such style and elegance, and the right colour hair too! Plus she could dance like an angel, and I've always wanted to dance - though sadly the lack of talent is a serious obstacle in my case. Ballroom dancing is magical, and I really envy anyone who can do it well.
Where do you see your writing career in the next five to ten years?
I’d like to continue writing novels and short stories in a range of genres, but I do have a penchant to write an historical, so that would be a lovely aim to achieve in the next five to ten years. I just have to stop being terrified of the complexities of historical research and all will be well … Watch this space!

Thanks so much for the great interview, Anne! I wish the best of success with your latest novel, and into the future. ~ Blak Rayne
Posted by Blak Rayne Books Blog at 11:30 PM