DANCE WITH A MILLIONAIRE - CASEY CROW 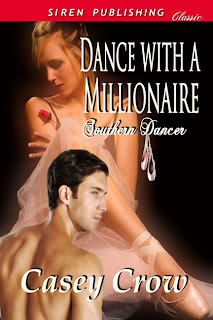 Tell us about yourself.
I’m a Summa Cum Laude graduate from the University of Alabama with degrees in Business Management and Dance. I got my Master of Business Administration from the University of Mobile. I live in the Deep South where I stay busy running my two children to way too many activities. In addition to writing, I work as a pageant coach of twenty years, professional emcee and model, dance choreographer, and certified Miss America preliminary judge. I guess my claim to fame is being a former Miss University of Alabama and NASCAR spokesmodel. I’m addicted to GCB, Castle & Revenge and work out religiously to compensate for my addiction to sweets.

Where and/or how do you find the greatest inspiration?
When you read my work it almost sounds autobiographical! I swear it’s not, but I’m passionate about the things I enjoy – dancing, pool, NASCAR, etc., and they invariably make their way into my writing. My tagline is “Sexy, Sass & Southern” and all my heroines are just that.

What made you chose to write f/m erotic literature in particular? And is there any other genre you’d like to write? And if so, why?
My voice is naturally spicy and sassy so I started off writing hot mainstreams. Every time I’d send it to an editor, she’d say jazz it up. Sex sells. There are worst things to write about. I’m excited to say that I’m about to begin a new project. I’ll be writing a Young Adult! Over the years, I’ve worked with hundreds of teenagers either as a dance instructor and pageant coach, and it fascinates me how they flip flop between still being kids and being incredibly mature.

Has your own life influenced your novels? And if so, how?
I recently had an interview ask me what was my recurring. I’d never thought about it, but after five manuscripts, I realized the one aspect of me that parlays into my heroines is they are the kind of girls that can wine and dine at a five-star restaurant one night and the next be just as comfortable drinking beer at a bon fire. It’s the best of both worlds and represents a true Southern Belle. I want my readers to get a real taste of Southern flavor!

Writing sex/romantic scenes can be a challenge for some authors. Do you find it difficult? If yes, how do you compensate? If no, where do you draw your inspiration?
My favorite part of writing is the flirty banter between the h/H. That builds the anticipation and gets me excited to write a sex scene. I don’t find it difficult to write sex scenes as long as I’m in the characters’ heads. I’ll admit though, writing CAN’T FAKE THIS was a challenge because it’s based on the Twelve Days of Christmas. Twelve sex scenes in one book! That’s a lot of positions!

Do you have a method you use to write the sensual parts? Do you prefer the sex to be open and bold? Or left to the imagination?
The best thing about writing is when I’m in “the zone” and there is no one else but me and my characters. As long as that’s happening, writing sensual is easy. I love the journey of falling in love, and that trip is going to include sex at some point. For me, it’s explicit. I once tried to tone down my natural “Sexy, Sassy & Southern” voice and after writing thirty pages, I realized, nope – I write sexy. No getting out of that.

Who is your favourite character, which you’ve created? And why?
Brett Bonner is a secondary character in FAST DREAM, the manuscript I’m finishing up now. He’s a player, cool as sin, and knows he’s gorgeous, but Marion doesn’t kiss up to him like all his other women. Good thing he’s never backs down from a challenge. Um, yeah, he’s also a NASCAR driver 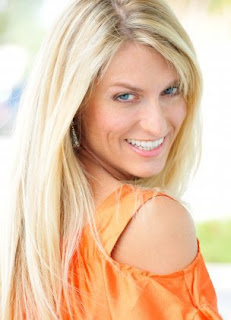 What is your favourite colour(s)?
Pink. I’m such a girly girl.
Which do you prefer a great hero or a great villain?
Hero. I can’t do scary. I’m the kid that would throw up at spend the night parties when they put in a horror movie.
What is your favourite movie? And why?
White Christmas. I LOVE Vera Ellen and her fabulous dancing.
If you could be anyone in the world who would it be? And why?
Oprah Winfrey. I’ve met her and am in awe because she uses her celebrity status to positively project the role of women in today’s society and challenges us to do the same.
Where do you see your writing career in the next five to ten years?
I liked to soon have my foot in the door in every publishing venue – traditional New York, ebook, and self-publishing to reach as many readers as possible. They are, after all, what it’s all about. I plan to continue writing “Sexy, Sassy & Southern” spicy contemporaries and funny YA’s. I also have a children’s picture book that I’m working on getting published this year. Think Dancing with the Stars for dogs.

DANCE WITH A MILLIONAIRE

Southern belle Campbell Layne is the rising star of the Manhattan Ballet Theatre, providing she lands the upcoming principal role. The stage heats up, however, when Rod Carrington steps in and teaches her more than she ever expected.

Campbell is determined to stay focused on the audition that will push her into stardom, but the dazzling attorney she meets at a gala proves to be a major distraction especially when he ends up being her professor in a college class she’s taking in her spare time. Campbell humiliates herself on their first date, but that doesn’t stop Rod from whisking her off to Italy and turning her into quite the vixen. Too bad he also had to use his powerful influence to secure the lead for her. Now she’ll never know if her talent was real or “bought” by the man she thought was the love of her life.

“Thank you for attending the performance and for your generous donation to MBT.”

“That’s well-rehearsed, Miss Layne. Tell me, though, do you turn on the Southern belle charm for all your fans or only the male ones?”

Her mouth fell open, but thank goodness she had the presence of mind to snap it shut. “How dare you? First of all, I’m from Alabama which makes the accent genuine, and secondly, that’s…that’s the rudest, most ungentlemanly thing to say.”

“I never said I was a gentleman and readily admit to be undeserving of your sweet façade. I’d much prefer the real you.”

She propped her hands on her hips. “And precisely what, may I ask, do you assume to be the real me, seeing as our acquaintance has a life span of what? Thirty seconds?”

She did not see that coming and stumbled back only to become trapped between the wall and his body. The hard, cold stone competed against his warm, harder presence. The latter won out. She ground her traitorous fingertips into her palms in an effort to prevent them from brushing away the stray curl that fell across his forehead.

The hem of his jacket brushed her hip as he moved in to splay his hand over her waist. The pressure built as he gathered her an inch closer. She caught a faint whiff of his cologne. The clean, fresh scent permeated the air and reminded her of the Southern pines back home, but this was not the time to reminisce.

“In fact, I’d like to get to know every inch of you.” Another sharp tug had her chest pressed against his rock solid form.

She flexed her fingers and pushed against his shoulders. “Let go of me, you arrogant pig.” A lion, cougar, leopard—anything powerful—seemed a more apt description though.

Rod chuckled and loosened his hold. A fraction. Enough to insert his finger between them. It followed the line of fabric at her shoulder slowly, very slowly, across her chest. As he glided over her cleavage, he said, “But, my dear, you’re mistaken. It’s confidence I possess.”

“More like cockiness.” Even as she said it, Bella couldn’t take her gaze off his finger or steer her attention from the intense hunger sweeping through her. She instinctively arched her back, lifting her breasts to silently beg for more.

“Either way, but I always get what I want, and in case you need me to spell it out”—he slid his finger up her throat to tilt her chin, forcing her to look at him—“I. Want. You.”
Purchase Link:
DWAM BUY NOW FROM SIREN PUBLISHING/BOOKSTRAND
DANCE WITH A MILLIONAIRE ADULT EXCERPTS
CAN’T FAKE THIS buy Kindle version on Amazon and all versions at Loose, Id.
CAN’T FAKE THIS Excerpt
See the CAN’T FAKE THIS book trailer
Thanks for stopping by, Casey. I wish you the best of success for the future. ~ Blak Rayne
Posted by Blak Rayne Books Blog at 11:18 PM