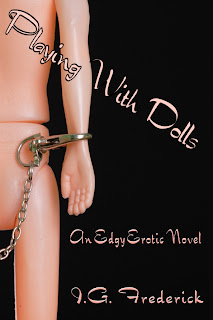 Tell us about yourself.
I like to tell stories. I started my first novel, when I was a child, although I never finished it. I completed my first two novels (which will never see the light of day again) in six months when I was between jobs in the eighties. Finally, after too many years selling my words to newspapers and businesses, I decided I would rather be poor and happy than well off and miserable.

I currently live in Oregon with my submissive Patrick, and three other eccentric felines. When not writing, we enjoy what the Pacific Northwest has to offer from the wild coast to the rugged mountains.

Since I've joined the indie publishing revolution, I've also become very good at book design. (In my previous career, I also designed publications for print.) I work with a fabulous cover designer, Nyla Alisia (who created the amazing covers for all the current editions of my novels), and my submissive Patrick (who designed my website http://www.eroticawriter.net/) at Pussy Cat Press. http://pussycatpress.com/

Where and/or how do you find the greatest inspiration?

My best work comes from anger about ugly things I see in this world, especially abuse and prejudice. Broken and Shattered were inspired by the suffering of a young man I befriended. Although Dommemoir is a romance, it has at its core concern for those who can't fit into the stereotypical roles society pushes them toward. Playing With Dolls reflects my anger about the prejudice and abuse suffered by those who are trangendered.

I still write speculative fiction and hope to have some success in that genre one day, although it will be under a different name.

Has your own life influenced your novels? And if so, how?

I don't just write about the lifestyle, I live it. I know what a whip feels when thrown, how it sounds when it marks skin, how different bottoms react to its kiss.

My stories are all fiction, but my own experiences, the people I've met, and the abuse I've witnessed lend realism to my stories.

As one reviewer wrote about Playing With Dolls: "the everyday details in the story created a realistically immersive landscape that made it easier to viscerally identify with the characters."

Writing sex/romantic scenes can be a challenge for some authors. Do you find it difficult? If yes, how do you compensate? If no, where do you draw your inspiration?

I've never found writing sex scenes a challenge. I think that's partially because every sex scene I've ever written is necessary to the story. I write sex scenes that either move the story forward, reveal character, or (preferably) both.

Because my sex scenes are determined by the characters and the story, I don't need "inspiration" to write them. For example, I inserted what I thought was a gratuitous sex scene in Dommemoir. I started writing the scene when I realized that in the original outline there wasn't much sex in the first half of the novel. Instead, the scene became pivotal for Geneviéve's journey from divorcée to Domina. And Jarod, the boy toy I thought would have a walk on part, stuck around for the entire book.

Tell us about your newest release. Please list publisher/purchase link/book cover/blurb and excerpt.

Playing with Dolls was inspired when I read a letter to an advice columnist in which the writer complained that her friend was going to marry an "obviously" gay man -- obvious, according to her, because he was effeminate. I wrote a letter to that columnist which refuted those concerns based on the possibility that the couple in question might have a FemDom/sissy boy relationship. Of course, my letter was ignored, because everyone knows all effeminate males are gay.

I know lots of effeminate males. Ninety percent are straight and most of the other 10 percent are bisexual. I also know many Gay males. Most of them are about as macho as a guy can be. You're not likely to find a more butch male than a Gay leatherman. Unlike macho straight guys, Gay leathermen have absolutely no exposure to anything female in their personal lives. But our society insists on equating "feminine male" with "gay."

My first three novels were published by small presses before I got the rights back and re-released them myself over the past several months. I decided to skip that step with my fourth novel and I am publishing the original myself this week.
Just for fun–
What is your favourite colour(s)?
Royal blue and rich purple
Which do you prefer a great hero or a great villain?

I like the bad boys -- my favorite characters tend to be anti-heroes or anti-villains.

What is your favourite movie? And why?

The Shawshank Redemption. What's not to like? The story is cunning and calls into question who's the hero and who's the villain. The acting is fabulous. I love the twists and turns the story takes. And, it's a perfect example of surprising viewers without shocking them.

If you could be anyone in the world who would it be? And why?

I don't wish to be someone else. I enjoy my life. I have the enviable privilege of telling stories for fun and profit. I have a submissive in service to me who loves and pampers me. I have three cats for entertainment. I live in a city that has more bookstores and more library usage per capita than any other its size. On a clear day I can see snow capped volcanoes and in Spring the flowers are a riot of color wondrous to behold. I enjoy my life.

Jesse enjoyed playing with dolls and wearing girls' clothing as a child. His liberal father, resigned to having a gay son, encourages Jesse's involvement in the LGBT youth culture of Eugene, Oregon where they live. On his eighteenth birthday, Jesse has his first sexual experience and hates it. A few months later, he is befriended by a Lesbian couple who introduces him to S&M. When they move away, he flounders, pretending to be a woman to get a job. Although Tony, a handsome leatherman, rescues him, Jesse finds the price too high for his liking. Then Tony takes his boys to Paradise and Jesse learns things about himself that he finds very difficult to accept.
Excerpt:

Jesse pushed through the crowd to the chain. Ashleigh fastened the cuffs around Rachel’s wrists and ankles, then clipped them to the ends of four chains dangling from each arm of the cross. Stepping behind it, Ashleigh turned a crank that tightened the chains. Rachel stood with her ankles spread wide, her face where the upper arms of the cross met, and her arms stretched above her head.
Ashleigh reached into the bag and brought out two items he’d never seen before. Each had a braided leather handle and long, leather strands. At first, Ashleigh held one behind her back while she swirled the other one in a figure-eight pattern against Rachel’s back. After a while, she twirled them together, gradually increasing her speed until the strands flew through the air, striking Rachel’s back harder and harder.
Despite the force that Ashleigh used, Rachel didn’t make a sound. Jesse could barely hear the leather slapping flesh over the pulsing beat of The Pussycat Dolls’ Buttons. He stared as Ashleigh stuffed the leather back in the bag and pulled out a long, narrow, wooden paddle. She stepped up to Rachel and ran her hand along the reddened skin of her back. She gripped Rachel’s ass and put her mouth up to her ear. Ashleigh said something Jesse couldn’t hear and Rachel nodded her head once.
Ashleigh stepped back, rubbed the paddle against Rachel’s ass for a moment, then swung it. Jesse could tell she hit harder and harder with each stroke. She grabbed the paddle in both hands and landed a smack that Jesse heard over the music. Rachel flinched, but didn’t cry out. Again and again, Ashleigh hit Rachel as hard as she could, a wicked grin on her face. She paused now between strokes. Rachel stood up on her toes, with clenched fists, after each blow. The moment she dropped her heels back to ground, Ashleigh swung again.
Jesse admired Rachel’s stoicism, and wondered how much she could take. Her ass gleamed bright red in the dim light. When the song ended, Ashleigh stuck the paddle between her legs, reached around Rachel and grabbed her breasts. Jesse could see her talking into Rachel’s ears, but he couldn’t hear her words. When she released Rachel from the cross, Ashleigh sank down in front of it, holding Rachel in her arms. The two kissed, and Jesse felt himself swell despite having everything tucked between his legs in the gaff.
A big guy with tattoos all over his arms leaned over the chain and spoke to Ashleigh, but she shook her head. She pulled a thin blanket from the duffle, wrapped it around Rachel and helped her move to one side of the cross, kissing her forehead and propping her up against the wall. Then she looked up at Jesse and crooked a finger in his direction. Jesse stared at her wide eyed, unable to move. Ashleigh frowned and crooked her finger again. Despite his reluctance, he found himself stepping over the chain.

Thanks so much for the great interview, I.G. I wish for you the very best, the book sounds great! ~ Blak Rayne
Posted by Blak Rayne Books Blog at 11:30 PM