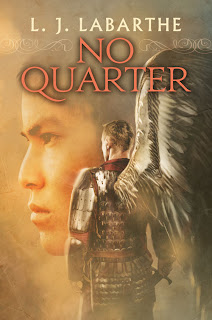 Tell us about yourself.
My name is L. J. LaBarthe. I'm just shy of the big 4-0, and I live in Australia. I share a rather nice little flat with a cat who is longcat. His name is Castiel and he's adorable, when he's not being a bitey, scratchy demon.

When did you know you wanted to become a writer?
I was thinking about this the other day, actually, and I think I knew from when I was very young. I have these vague memories of little me writing stories to go with my drawings of cats and horses. Although I didn't admit to myself that I really did want to be a writer – as a kid, I wanted to be a vet, then as a teen, I wanted to own a record company – now as an adult, I'm very aware that being a writer is what I want to do.

Who and/or what prompted you to write your first novel?
I'd been writing novel length fiction for some years. I'd written a series of stories with a very good friend of mine, which were designed solely to entertain ourselves and they started out as shorts and grew to 100K word epics in an amazingly short period. I'd also done Nanowrimo for the last ten years, and I found Nano to be a really helpful experience. The prompting to write was, first, to get the stories that were in my head out and down on paper; my friends seemed to like what I wrote, so I wrote more and after having several short stories published, Dreamspinner Press is publishing my first full-length professional novel, "No Quarter." They're also publishing the sequel, "No Surrender, No Retreat," both of which are out this year.

What made you chose to write erotic literature in particular? And is there any other genre you’d like to write? And if so, why?
I guess because I like to read it, mostly. I write what I like to read, which is plotty stories with sex. I don't mind a good plot-what-plot, but my first love is a story that has a lot of heart and soul to it as well as sex and passion. I've been looking back over older manuscripts and while I've written a lot of dystopian future novel length stories and fantasy/sci-fi, they all have some element of romance in them and at least a touch of erotica. So I don't know that I could really write a story that didn't at least have one kiss in it.

Which appears first when contemplating a new project: A character, the plot and/or the title?
A scene, actually. Usually I'll get a scene play out in my mind's eye, or a snatch of dialogue, and I'll build on that and find the characters and plot grows organically. Unfortunately, for me, titles are my nemesis. I have a really hard time with them. My good friend and fellow author, Meredith Shayne was actually the one to come up with the title for "No Quarter."

What’s the hardest part of a novel for you to write: Beginning, middle and/or end? Why?
Each novel is different. "No Quarter" was a breeze until about three-quarters of the way through. I had to stop and look at my zillion notes in messy scribble that passes for my handwriting to figure out how to make sure I didn't write myself into a corner. "No Surrender, No Retreat," the sequel, was an absolute joy from start to finish. It just seemed to flow so easily. On the other hand, though, "No Shadows Fall," the sequel to that, kicked my butt around 2K words shy of the middle. Again, I don't want to write myself into a corner and I don't want to contradict myself. Some of my favourite series' have been less so when reading later books and finding that the author has changed things without any seeming rhyme or reason. I don't want to do that, so I need to make sure that I'm not going off into wild tangent land or contradicting two prior novels.

Writing sex/romantic scenes can be a challenge for some authors. Do you find it difficult? If yes, how do you compensate? If no, where do you draw your inspiration?
No, not really. I don't know why that is. Reading, watching movies and TV (and no, not all or even most are porn!), sometimes the thing that frustrates me is the seeming limited nature of the English language. There's only so many ways you can say cock without it sounding repetitive or hilarious. Sex can be hilarious, it's true, but I don't want readers to be convulsing in laughter because I've just decided that I'm suddenly going to call Character A's dick his 'hot meat injection' for instance.

Who is your favorite character, which you’ve created? And why?
Oh, all the Archangels, without a doubt. There are ten in total. They aren't fluffy bunny manifestations of Heaven. They're flawed, noble, sometimes they're right bastards. Sometimes, they're unlikable. They have the best intentions and they do whatever they're ordered to by God, but they also have free will. However, they're still learning, because at the end of the day, they aren't human. They don't really understand everything it is to be human, even those of the Archangels who have lived on Earth for millennia.

They aren't brothers, either; they're a species of a race, the race being Angelkind. They're also a Brotherhood, like a monastic order, with more sex, violence, swearing and vices. Writing these near-omniscient creatures that are learning about humanity and life on a daily basis, learning how to cope with relationships and how quickly humanity changes when they have lived forever, is fantastic. I'm having so much fun writing them. There's a lot of joy in writing these characters, for me, it's taking something that has had one meaning to me, because I was raised in a religious home as a child, (although I am not religious these days), and totally turning that meaning on its head without losing – I hope – the spiritual holiness of these characters in the process.

You would never know it from his flamboyant lifestyle, but Gabriel’s not just the cheerful, fun-loving adoptive father of a pair of indulged young adult humans. He’s an Archangel, commander of Heaven’s legions of Seraphim, and despite his apparently easy virtue, he’s harboring a serious crush on his superior officer, Michael.

For years, Michael has devoted himself to developing a team of humans, the Venatores, to aid in the fight against Hell. He’s been pining after Gabriel for centuries without hope, believing himself to be too serious to attract the other Archangel’s interest. He’s happy to discover that he’s wrong, but their burgeoning relationship is stymied by a major problem: an egomaniacal human is recruiting demons and fallen angels in a bid to take over the world. It’s up to Michael and Gabriel, and the rest of the Brotherhood of Archangels, to beat back the forces of Hell before the Earth is overrun.

What’s your newest WIP? And when we can expect a publication date?
I've got a few things on the go at the moment. One is another Archangels novel, another is a novel length sequel to my Byzantine Empire era short, "City of Gold." The sequel is called "City of Jade," and it's taking me quite a while to write, because I have so much to research. That is set in the late twelfth century and is basically a road trip novel – along the Silk Road, from Constantinople in Turkey to Hangzhou in China. I'm also working on a novel about extractors, people who rescue those who are trapped in cults or gulags.

Just for fun–
What is your favourite colour(s)?
Black and red.
Which do you prefer a great hero or a great villain?
A great villain.
What is your favourite movie, and why?
"Red Cliff." The five-hour director's cut. Until I saw that film, I would have hemmed and hawed in indecision, but after having seen this movie just recently, it's definitely the most perfect piece of cinema I've ever seen. The characters are all three dimensional and engaging, the attention to detail in sets and costuming is amazing, the story, about the Battle of Red Cliff in China during the Third Century A.D. is exciting. The score is perfect, the direction is flawless, the acting is brilliant, and it's just the most wonderful, spectacular film. John Woo did a magnificent job with it. I can't recommend it enough. Especially if you like historical epics and non-English language film.
(I must add, I have this film on DVD and it is absolutely awesome!~Blak)
If you could be anyone in the world, who would it be?
You know, I'm pretty okay with being myself.
Where do you see your writing career in the next five to ten years?
Hopefully continuing. I don't want to burn out and fade away. If I can get a book a year out, I'll be very happy with that.

Thanks so much for having me, Blak! J

PLEASE NOTE THAT IN CELEBRATION OF HER NEW RELEASE, L.J. WOULD LIKE TO GIVE-AWAY 2 PDF COPIES OF "NO QUARTER" TO 2 LUCKY READERS! *Make sure to leave your comments and name with an email address in the comment section of this post!

Not a problem at all, hun! It was wonderful to have you. I wish you the best success with your new release and those in the future! ~ Blak Rayne
Posted by Blak Rayne Books Blog at 11:30 PM