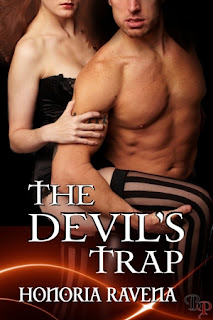 Welcome, sweeties! Thanks so much for stopping by. Todays guest is paranormal, romance writer, Honoria Ravena!

Tell us about yourself.
I’m a paranormal romance writer. I love to belly dance. I’m currently got to school to be an Aesthetician, which has to do with skin care and makeup application. I’m a makeup junky!

What made you chose to write romantic literature in particular? And is there any other genre you’d like to write? And if so, why?
I’ve just loved romance forever. Even when I was younger I read YA books with more of a romance plot. And then as you get older sex just goes hand in hand with love and so I started reading the dirtier books.

Which appears first when contemplating a new project: A character, the plot and/or the title?
For me a (very) basic plot comes up first. It’s not even really a plot, more like a good beginning of a back cover blurb. After that ideas just start flying. For example, the first idea I got for The Devil’s Trap was “What if the vampire this woman is hunting kidnaps her brother and turns him?” It just snowballs from there.

What’s the hardest part of a novel for you to write: Beginning, middle and/or end? Why?
Middle, middle, middle. And I can tell you an exact range of the word count too. Things start to get hard around 26,000 words. I’m hoping it gets difficult there because I don’t plot. Remember that small idea I had? Well it only equals the beginning of a story. After that I go blank on how to end it, and that’s the point where I actually have to sit down and think out the rest of the book.

Writing sex/romantic scenes can be a challenge for some authors. Do you find it difficult? If yes, how do you compensate? If no, where do you draw your inspiration?
It really depends on my mood. If I’m super into the flow of my story, those things just go. BUT I have a tendency to stop writing in the middle of sex scenes. I don’t know why, I just must get writing burn out at that point because there is so much detail and emotion that goes into them. When I stop writing, I lose flow, and when I come back that sex scene will just be dead in the water. At that point I just have to push through and go back and fix it when I rewrite the story. Also, if for some reason I’m not in the mood for the sex scene, I just have to push through it and I’ll think it sucks. Oddly enough, those usually end up being the hottest scenes in the books.

Who is your favourite character, which you’ve created? And why?
My favorite so far is the character in my recent release, Zarek. He’s a sarcastic, pain in the ass. Definitely one of my bad boys. He won’t take crap from anyone, and he’s always going to tell you what he thinks without sugar coating. He always gets his way.

What is your favourite colour(s)?
I love blue. Cerulean blue.

Which do you prefer a great hero, or a great villain?
A great hero. Because in the end I want a love story, and I like to see hard ass men get bowled over by bold women that they can’t resist loving.

What is your favourite movie? And why?
Wow I’ve got so many, it’s hard to pick one. I guess the first Terminator movie. I was raised on it. It’s got a bit of a tragic love story and a heck of a lot of action. It just never gets old. In my world it’s a classic.

If you could be anyone in the world who would it be? And why?
I’d be J.R. Ward or Rachel Brice. I’d be J.R. Ward because I admire her writing skill and her discipline, which I lack. Rachel Brice (for those that don’t know) is an amazing tribal fusion belly dancer. Again, I admire her self-discipline and mad skills. She also gets to travel the world doing what she loves, and I want to do that. I’d spend the rest of my life traveling if I could.

Where do you see your writing career in the next five to ten years?
I hope to be published with a NY publisher. The dream is a Penguin imprint like Berkley. I’d also like the self-publish some books, and continue doing some work with e-book companies. I really want to grow as an author and be published in various formats and eventually various niches in the romance genre. Also, the big dream is to be able to support myself as a writer. It probably won’t happen, with the way publishing and the economy is going, but I can cross my fingers and work towards it.

Regan is the best vampire hunter money can buy. But when she's paid to kill one of the most powerful vampires in existence, she doesn't realize she's in way over her head. Things go terribly wrong, and there is no escape...
Zarek is so powerful, he scares other vampires. One little hunter should be no challenge. However, Regan is different, and as soon as he sees her, he will do anything to keep her. But she's a stubborn woman who refuses to let someone else control her.
When a powerful enemy comes to town, she's forced to trust Zarek with her life. Who is the larger threat? The man out to destroy humankind? Or the vampire determined to own her heart?

I reached the wooden bar and slid onto a sleek black stool with a groan of relief. In front of me, a shirtless vampire buffed the countertop, muscles flexing with each circle he made. Now this was a guy you actually dreamed about seeing naked. He was built like a god. Every muscle toned to perfection. He had probably been a big, chiseled guy before, and vampire blood washed away any flaws he might have had as a mortal. His raven-black hair gleamed in the lights. He was the perfect thing to bring in young women for a bite on the neck.

I sighed in pure feminine pleasure. Just because he was a vampire didn't mean I couldn't appreciate the view. But, a black aura and raw vampiric strength bled from him. He would have been jump-his-bones hot if his power didn't creep over my skin like spiders. I suppressed a shudder. No matter how enticing their form, vampires always made my skin crawl.

His gaze met mine, and I drew in a breath. He had the most gorgeous violet eyes. They were filled with an ancient intelligence. His lips curled into an amused grin, as if he knew I was ogling his body.

I frowned. It annoyed me that he read me so easily. I shook my head. I needed to remember the real reason I was here. I was here to kill Zarek, not drool over some gorgeous vampire. I was in a den of evil creatures, and he was one of them. Now really wasn't the time to do any lusting.

The smile widened and he raised his voice over the music. "What can I get you?"

He had a subtle accent I couldn't identify, and the deep, growling bass made my toes curl. It soothed my nerves in spite of what he was and caused another kind of excitement to bubble in my stomach. God, this was not the right guy to get that good down-low tickle for. Focus, Regan!

I cleared my throat and leaned closer to him. "I'd like to see the owner."

The smirk turned wicked and suggestive. "I'm Zarek. I'm the owner." He scanned my body, eyes finally resting on my throat. The scrutiny made me flush and wish I could hide my neck. Unfortunately, my black tank top and ultra-short shorts didn't leave much to cover up with. People who went into vampire clubs usually favored bare skin and a gothic appearance, so I'd been forced to blend.

Had he fed tonight? Vampires were twice as dangerous when they were hungry. The better question was, had he killed tonight? For some strange reason, I found myself hoping he hadn't. I tried to shake the ridiculous feeling. Even if he hadn't killed tonight, he had in the past. And even if he'd stopped, like Alaric and his brothers, it didn't change what he was, or the fact that someone wanted him dead.

He licked his lips before meeting my gaze again, leading me to believe that he hadn't fed. Great, I wouldn't leave this place without giving a little blood to him, even if I ended up killing him. If a vampire wanted blood, he'd find a way to take it.

Thanks for doing the interview and sharing your novel, Honoria. All the best and I hope your future is great! ~ Blak Rayne