Has any single event stood out in your life-predominant due to trauma or perhaps a loss of emotional attachment? Was that event something you'll never forget? What about a song or movie? For me, it's generally movies that leave the greatest impression. As an artist and writer I'm a very visual person, also observant, and of course, I possess a wild imagination. So, anything I see and especially if it touches a chord can remain with me permanently. This is what I like to call a 'defining moment'–a moment when you experience an awakening whether physical, emotional or psychological and you gain wisdom. Something happens right at that instant that changes your perspective, maybe even your life, forever.

One such ‘defining moment’ occurred when I watched the 1992 movie The Lover. Allow me to give you a brief synopsis. 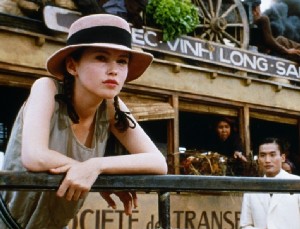 The main characters in The Lover are ‘The Girl’ (fifteen) and ‘The Chinese Man’ (twenty something). The young girl is the daughter of a poverty-stricken and dysfunctional colonial family that likes to wear an old silk dress and a Fedora. She also likes to paint her lips bright red when alone. Basically, she’s a rebellious teenager and hates her entire existence.
The Chinese Man is the son of a businessman that made his fortune in real estate. He’s just recently dropped out of school and returned from Paris. The Chinese Man has the look of a playboy and even the money, but lacks the self-confidence. Basically, Mr. Sexy hates his existence too–well I should say, he wishes he could be the man instead of complying to his families wishes.

One sweltering day, The Chinese Man sees The Girl standing by a ferry crossing at the Mekong River. He’s instantly smitten and offers her a ride to Saigon in his limousine. The young girl accepts the ride. She lies about her age, claiming she’s seventeen when in fact-as she stated at the beginning of the movie, she’s fifteen. The next day, he picks her up from school and they have sex in a room he rents. 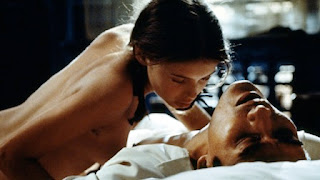 The story takes off from here. The pair engages in this torrid love affair. According to the movie, The Chinese Man cares for her, but is also violent. According to the book, this is wrong. The Chinese Man loves The Girl very much and never so much as raises a hand to her. Unfortunately, for The Chinese Man, he is betrothed to another and can’t marry The Girl, though he’s deeply in love. Part autobiographical and part embellished by the author, this movie/story and the images associated with it have stuck with me ever since I viewed it.

The movie itself caused a lot of controversy simply due to content and because the actress that played ‘The Girl’, Jane March, barely turned eighteen when filming started. Tony Leung Ka Fai’s wife (The Chinese Man) didn’t wholly approve of the role and kept a close eye on her husband from behind the camera during filming. The sex scenes are numerous and explicit. Almost the entire movie revolves around the sex. Obviously this couple, whether imagined or real screwed a lot. And this is where the ‘defining moment’ came into play for me… At the time, I was appalled while watching the film, but equally turned on. I remember thinking–he’s a hot and I’d do him! This is when my fascination with Asian men began. Also, I could relate to the character. I’d experienced a similar situation with an older man at a very young age, which left me psychologically wounded.

My relationship made me into the woman I am today and tainted my future with men, my thoughts towards love and sex. The movie triggered my memories, placed emphasis on those I cared to forget and forced me to see the truth in my own life. When a woman or girl looses their virginity, it’s a highly emotional moment, which is heightened by the physical arousal and other new sensations that she’s possibly never felt before. The body and mind is bombarded by so many signals it’s hard to differentiate between them–what’s love and what isn’t. Most young women associate sex with love and vice versa, though the two are intertwined they’re still very separate from one another. One’s a physical response to physical stimuli and the other is an emotional response to emotional stimuli. The Lover brought back some uncomfortable and even painful memories, while others remain wonderful. And, the movie opened my eyes to class discrimination, interracial sex and what should be perceived as a healthy and meaningful relationship. It helped put my life into a disturbing perspective. I’ve never watched the movie since and I can honestly say, once was enough. Maybe it hit a little too close to home. Whatever the reason, The Lover helped define my own sexual experiences and definitely put my fortitude to the test.