WEIGHT OF A GUN - ELIZABETH HYDER 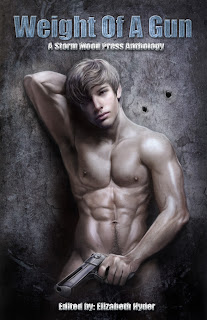 When did you know you wanted to become a writer?
I've been writing since I was in elementary school, so writing's always been natural for me. It wasn't until after my first short story got accepted—the one I'd written and submitted half because of a dare, half because I wanted to see if I really was good enough to be published—that the notion of being A Writer occurred to me. I'm still working out what one really does all day when one is A Writer, but it's not an unpleasant sort of thing to try and figure out so I'm enjoying myself.

Where and/or how do you find the greatest inspiration?
In books, usually. I tend to either be on input mode or output mode: I am either reading more or writing more. When I say more, I mean I'm spending six or more hours a day doing one thing or the other. So I tend to get my ideas from whatever I'm consuming, whether it's time-travel or fantasy or sci-fi or whatever else. The ideas don't even always come from what's in the books, either. A lot of the time I get ideas from what isn't there, from something I would have like to have seen but didn't—an anthology on the subject of gunplay, for example.

Which appears first when contemplating a new project: A character, the plot and/or the title?
I'm very character-driven both in terms of what I read and what I write, so characters tend to be the first things that come to me. Trust Me is the odd ball out: the working title was what came first. 'Lizardmen in Space' was the idea I started with for what I wanted to submit to Wild Passions: an alien species owing its roots to reptiles rather than mammals. And I knew they'd be at Moravec, which is part of a larger universe I'd written stories in before. For what I ended up writing, Trust Me was a much better fit title-wise, but it's one of the few stories where I didn't start with characters so my original working title has stuck with me.
What’s the hardest part of a novel for you to write: Beginning, middle and/or end? Why?
It can be trying for me to choose a place to start, but that's only every so often. The thing I always struggle with is finishing a project. I'm just a little ADD, the way water's just a little wet, so I always feel incredibly proud of myself when I manage to finish a whole story.
I actually just finished writing 100k words for NaNoWriMo this November, working on four different projects and not finishing nary a one of 'em. One's most of the way done, though, and (supposing I'm going to turn it in) it's due on December 31st. I hope I can make myself finish it!

Writing sex/romantic scenes can be a challenge for some authors. Do you find it difficult? If yes, how do you compensate? If no, from where do you draw your inspiration?
Writing the sex scenes is my favorite part! I had a friend challenge me once to write a story that was nothing but sex scenes, and though the finished product didn't quite meet the challenge, it was one of my favorite things to write. There's so much going on between characters in a sex scene, in the ways they choose to interact and the things they pay attention to or ignore. The characters are what it's all about, for me, so I relish the opportunity to take the flying leap into their heads and tend to draw my inspiration from that process of discovery.

Are your characters based on people you know? Or are they completely fictitious?
I sometimes take aspects of a friend's personality, or an event that happened in their past, or something that someone believes it in, and transport that into the story and see how it mixes with other elements. But I don't do it that often; most of the time the characters are completely fictitious. It's just easier to not have any constraints, for me.

Who is your favorite character, which you’ve created? And why?
I think Atlas, from Trust Me, is probably my favorite of the moment. He's a redhead, first and foremost (I might be biased) but the other thing I really like about him is that he can handle Koit. I didn't intend for him to be an ass, but when Koit ended up being the way he was Atlas wound up being one right back. I don't think Koit's the kind of person who inspires the best in people!

I kind of want to write something about that, now: Atlas' adventures in teaching Koit to act like a semi-normal person… or at least one who is slightly less offensive. Atlas would have his hands full, I think.

Tell us about your newest release!
Weight of a Gun, an anthology featuring stories with gunplay in them, was just released last week! This is a very exciting release for me because it's my first time editing an anthology. Storm Moon Press has been absolutely a joy to work with through the whole project, providing guidance when I asked for it and letting me make decisions at other times. I don't have a story in the anthology myself, because we got a ton of submissions. There was so much interest that Storm Moon has called for submissions for a second volume, to come out this time next year—I'm really looking forward to editing it.

As for the stories in this anthology, I think the blend of story types strikes a good balance: happily-ever-after, bittersweet, and even one sad piece. The stories are very high quality, and a lot of the authors are never-before-published. Don't let their lack of prior work fool you: these authors are talented, and I felt lucky that they wanted to work with us.

Blurb: Everyone knows that guns are dangerous; they have long been a subject surrounded by controversy. Combine them with sex and you have a subject that is virtually taboo, but smoking hot. This anthology explores the intersection of these two worlds, and the sensual possibilities they inspire.

In Bounty Hunter, William Hunt is hot on the trail of lover-turned-outlaw James Campbell. But when William finally catches up with James, bringing him to justice is the last thing on his mind. Changing the Guard introduces Tomi Vuorela, working security in a frozen off-world outpost. When Andile Harper intrudes on his seclusion, Tomi must determine if the interloper is a harmless workman or a dangerous terrorist.

Avery Belfour is The Machinist, kidnapped by a rival colony in need of his services. But the dark and deadly Harrow may have other plans for Avery first. In My Rifle Is Human, the more a Gunslinger like Fil sexually satisfies his shapeshifting partners, the Ordinances, the more likely they'll survive as weapons on the battlefield. When late-bloomer Morris becomes Fil's latest partner, however, it will take all Fil's patience and skill to seduce and inspire Morris in time for the next wave of attacks.

Tyler Maxwell from In the Pines, a former New York cop now working a desk job in Alaska, buys a gun as a present and begins to dream about the mysterious and beautiful Flynn. But Flynn is more than a dream, and Tyler must find the truth before he loses his mind. Finally, in Compromised Judgment, Rózsa Ignác is working to uncover a gunrunning operation supplying arms to his enemies. He's certain that Cistalan Konrád is involved, but his attraction to the other man puts himself and the entire investigation in danger.

Excerpt:
Ignác returned to his room before dinner to find Cistalan Konrád sitting at the foot of the bed. Being on edge had sharpened Ignác's reflexes. His draw was faster than normal. Ignác was inside his room and nudging the door shut before his mind fully registered it was Konrád.
"Rózsa Ignác." Konrád's voice was steady, but his eyes widened when Ignác drew his pistol, and he held up his hands in surrender. "I have come to beg a favor."
"Would that favor be ignoring that you picked my lock?" His voice shook, and Ignác couldn't tell if it was from anger or fear or something more troublesome.
Konrád flashed him a wan smile. "I have come to beg two favors."
He did not want to like Konrád's smile. And he certainly did not want to like the twist of desire he felt at Konrád's use of the word beg. But he did. Ignác sighed. "Beg, then."
His reply sparked a quick flare of heat in Konrád's eyes. "If the circumstances were different, I'd be tempted to beg three favors." His smile took on a bitter twist. "But then, if the circumstances were different, you would not be here."
It was hard to keep his pistol steady. It felt twice as heavy under Konrád's gaze. "What do you want?"
"I want..." Konrád's voice was raw. "I want many things. My School back, for one, but I have seen enough to know it is lost to me."
-- from "Compromised Judgment" by Penny K. Moss

Just for fun–What is your favorite color(s)?
Purple, since I was a kid. More recently, green: that rich shade of green that sits on the border between warm and cool.

Which do you prefer a great hero or a great villain?
A hero! I tend to end up with a lot of main characters as favorite characters. But, now that I'm thinking about it… a hero's not really a hero without a villain, so they're a matched set in many ways. I'll take the pair.

What is your favorite movie? And why?
My favorite movie of the moment is Primer, for a lot of reasons, but mostly because it explores the psychological aspect of a thing that many movies and books have featured but never really explored. I am being particularly obtuse on the subject that the movie is about, because it spoils a large part of the plot if I tell you. It's well worth a watch, even if only because it's a gorgeous movie, though in a more down-to-Earth sort of way than big blockbusters.

Where do you see your writing career in the next five to ten years?
I hope to get a novel-length piece out at some point, and I look forward to continuing to edit anthologies with Storm Moon Press. I'm also working on some co-writing projects, so I'm really excited to see where those go!