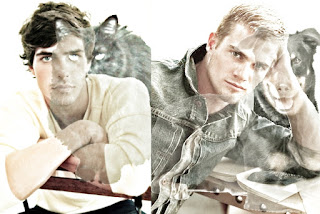 “He’s in the backyard,” the woman told Alfie after he’d explained why he needed to talk to her son. She still watched the dog at his side warily as she added, “I really don’t think he knows where Rémy is. He’d have said something when Rémy’s father came by.”

“I understand but it’s worth a try. I’m talking to anyone Rémy knows, just on the off chance they’ve remembered something they forgot to tell his dad.”

She nodded and pointed to the path that led to the back of the house. He thanked her and followed it, the Beauceron at his side.

The three teens there stopped tossing a football around to look at him. “What kinda dog is that?” one asked as he took a few steps towards Alfie. He held out his hand tentatively to let the dog sniff it. “Will he bite?”

“No. He’s well trained,” Alfie replied, earning him an amused ‘As if’ in his mind from Terry. “Are you John?”

“That would be me,” a second teen said as he came over. He looked at Alfie in question.

Alfie introduced himself and explained why he was there.

‘Those two know’ Terry said, his animal enhanced senses picking up on the feelings of the teens. ‘They may even know why he ran. They’re feeling very protective of him. The third kid is clueless.’

Alfie tapped his fingers on his thigh as he studied John. “You were one of Rémy’s closest friends according to his father,” he said quietly. “So I can understand you wanting to protect him.” He glanced at the third teen who had remained where he stood a few yards away. “I take it he doesn’t know what’s going on.”

“Nothing’s going on. Rémy just needed space so he took off,” John muttered. “I told the other man that when he asked and it’s the truth.”

“Other man? Someone else came here asking about him?”

“Not here. Outside of school. He said he was a cop, plainclothes, and he was following up on a missing persons report Rémy’s dad had filed. I told him the same thing I’m telling you. I don’t know where Rémy is.”

“Well…no. But I didn’t ask either so…” John shrugged.

“Did this cop talk to you too, umm..?” Alfie looked at the boy standing beside John.

“Mark, and no. No cop braced me. If he had I’d have told him the same thing John did, I know nothing.”

“So neither of you knows what Rémy had been thinking about his brother’s…” Alfie paused to give the word emphasis. “…murder.”

“How do you ….?” Mark stopped when John punched his arm.

“I found his journal, which by the way I haven’t shown to his parents.”

“Why not?” John asked in surprise.

Alfie smiled. “Instinct maybe, but the fact that it was so well hidden made me think there might be things in it he didn’t want them to know.”

John looked at Mark and nodded towards the far side of the yard. The two teens walked away, stopping long enough to tell their friend that maybe he should head out since they had stuff to deal with. The friend looked a bit hurt but walked off through the back gate and down the alley.

‘They’re trying to decide if they should trust you,’ Terry commented as he eavesdropped on the teens.

‘No shit,’ Alfie muttered softly in return, scratching behind the dog’s ear.

It was a couple of minutes before the boys came back. “Can we go somewhere else to talk?” John asked.

John thought for a moment. “You know the bike path by West?”

“That works. It may take me a few to get there. I want to take him home.” Alfie patted the Beauceron’s head, “Do you mind if I pick up my partner and bring him along?”

“I…yeah sure.” John suddenly cracked a grin, “But not ‘til you show me ID. Even PI’s have to have some, right?”

“Investigators, and yes we do.” Alfie opened his wallet, showing the teens his ID.

“Deal.” Alfie smiled as he headed out of the backyard with the dog at his heels.