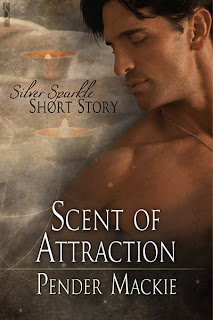 Scent of Attraction
By Pender Mackie
BLURB
When Shawn takes a job at a cologne counter in a busy department store he hopes it’s the beginning of a successful career in the health and beauty industry.
But almost two years later Shawn is frustrated with his job and his love life. He’s still working the cologne counter, still single and still spending every night alone.
His job allows him to meet plenty of good-looking men but most of them are straight, and even when they aren't, Shawn is shy. He gets nervous and tongue-tied when he’s around a hot guy and the thought of going on a date with a complete stranger makes his stomach churn nervously.
When he meets friendly and outgoing Graham the attraction on both sides is intense and immediate.
Shawn might be willing to step out of his comfort zone this time, but there’s just one problem. Graham's already with someone else.
Is their relationship over before they even share a kiss?

EXCERPT
Shawn groaned quietly. Another day dealing with good-looking straight boys. He really wasn’t in the mood for them today. He groaned again and resisted tugging on his short, carefully gelled hair. Besides being an annoying reddish blond and ridiculously fine, if he touched it too much the spiked bits would flop over, ruining the overall effect. Plus, he'd look about twelve years old instead of the twenty-five he actually was.

He stood in the center of his workspace, grimacing at the glass and chrome-trimmed counters that surrounded him. The glare—combined with the insipid store music and the smell of too many competing colognes—was starting to give him a headache. His shift had barely started and it was the middle of the January sales so the store would be full of shoppers looking for things they wanted, but didn’t get for Christmas.

It was Shawn's least favorite time of year. He didn't much like winter and he didn't like the frenzied shoppers and their mindless consumerism. And he hated how the stores—including this one—pushed to sell more of everything from perfume to kitchen gadgets, as if people hadn't bought enough unnecessary junk at Christmas.

Shawn's bad mood wasn't really about gray skies or bargain-hunters, though. He knew the real reason. He'd been working at this stupid cologne counter for almost two years and still no promotion.

When he'd finished university and taken this job in a brand new city, Shawn had known he'd be pushing fragrances and skin products, but that was okay. He'd done his research. This company was one of the best in the industry and he knew they liked to promote from within, liked their executives to have ground-floor experience. It was even rumored that a couple of the VPs had started out on the fragrance or cosmetics counter, and Shawn was willing to pay his dues. He just hadn't expected it would take so long to get his first promotion, and his lack of progress was making him moody and frustrated.

But there were some good things about this job. He got to see a lot of nice looking guys—though most of them were straight. He didn't have to spend much time with Mandy; the annoying saleswoman working the cosmetics counter, and his coworker, Stefan, was great.

He'd met Stefan when he began this job and they'd become almost instant friends. Stefan was a few years older and in a long-term relationship, but he'd made an effort to befriend Shawn and show him around the city. His partner, Anthony, had been just as outgoing, and now Shawn had a couple of good friends so his social life was doing all right even if his career and love life sucked.

Stefan's shift would start soon, and Shawn knew he'd be here any minute—his coworker was obsessively punctual. As Shawn glanced at his watch, Stefan glided towards their counter in his usual snazzy business attire and, for some unknown reason, a ridiculous-looking, puffy down-filled coat. The coat was open and his hands were stuffed in the pockets. Stefan was wearing his best bland expression. That meant he was up to something.

"Morning, Shawn. Ready for another fun-filled day of adventure?"

Shawn shrugged, feigning indifference as he leaned against the counter.

"You could be a little more enthusiastic since I'm about to make all your dreams come true. Guess what I've got in my pocket?"

"Unless it's a dehydrated, instant boyfriend and a bottle of water, I don't want to know."

"If she wears any more makeup she's going to need a heat gun to peel it all off. Here, I smuggled us in some coffee." Stefan carefully drew two takeout cups from his pockets.

Shawn brightened and pushed off from the counter. "Thanks." He accepted the coffee gratefully, taking greedy sips before stashing the cup behind the cash register sitting on the island in the middle of their station. Caffeine was almost as good as aspirin. He could actually feel the headache receding.

"Maybe you aren't making all my dreams come true but you're definitely at the top of my list of favorite people today."

"Aren't I always?" Stefan asked, grinning. He sipped his own coffee more sedately. "I like your dehydrated boyfriend idea. You could order him from the back of a comic book, like those sea monkeys."

"Yeah. You could skip the 'I like him, does he like me?' phase and the awkward first date stuff," Shawn joked. He was getting into this now. "Just add water and ta-da! Instant boyfriend. Plus, if he did something to annoy you, you could leave him on top of the radiator to dry out and shrivel up again," Shawn suggested, laughing.

"Please! Don't use the words 'shrivel' and 'boyfriend' together." Stefan shuddered theatrically as Shawn snickered.

Shawn looked up, his knees stiff from prolonged kneeling. Stefan was gazing across the department store floor.

"What?" He turned awkwardly and sat on his haunches. Damn. His foot was asleep.

"Hot man at ten o'clock. To your left." Stefan spoke from the corner of his mouth as if he was in a prison yard relaying a message—jailbreak tonight, pass it on.

Shawn thought maybe Stefan had seen too many movies. It took him a few seconds to figure out where to look and when he did, he couldn't see beyond the counter from his position.

"And gay?" Shawn asked only half-sarcastically.

"Maybe. Just get up here!" Stefan strode towards him and reached out to grab his arm. They both froze as the man reached their counter. Shawn looked at him, curious to see what all the fuss was about.

The man wasn't particularly tall but he did have a nicely muscled frame, light olive skin, and dark wavy hair pushed back from his forehead. The whole package was presented in a dark business suit and a crisp white shirt. Shawn's pulse picked up. He loved the sight of a good-looking guy in a smart suit, and this one was gorgeous.
Scent of Attraction
Pender Mackie: http://pendermackie.blogspot.com/
Silver Publishing
Contemporary M/M Romance
Purchase Link: Scent of Attraction

Posted by Blak Rayne Books Blog at 7:00 AM