COMING OUT OF HER SHELL 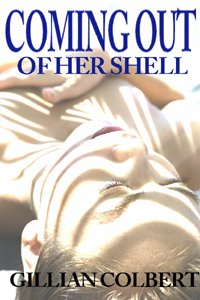 My original intent was not titillation, but rather research. I wanted to be able to write my male character perspective better and my guy was sick of me interrogating him on his every sensation during sex. My only other resource, my grown nephew, has become prudish about discussing this topic with me because I’m his Aunt even though we are only four years apart. That left me with not enough information and a need for knowledge. So, I downloaded Wanting by Piper Vaughn and became instantly addicted.  Pretty soon I was devouring everything I could find in an endeavor both to experience the total hotness of it all, but also to figure out why I responded so viscerally to something so far removed from me … or so I thought.

What I came to realize as I indulged in my newest addiction, was that this was not as far removed from me as I thought. I’m no virgin. I’ve been penetrated. I’ve performed oral sex and been the recipient of it. So, the only thing differing between me and the lead character was the specific equipment and the lack of a prostate, but that is where suspended disbelief fills in the gaps. When I’m reading about a man being penetrated, the sensations of stretching and burning, thickness and being full are all ones I’ve experienced which means I can fundamentally relate both intellectually and viscerally. I find myself excited by the end of an m/m story more often than not.  In the end, I think this fundamental parallel is why so many women are gravitating to m/m erotica and romance … because they can relate viscerally to the experiences being described.

For me, that’s all the answer I need.

Coming Out of Her Shell-Excerpt
Buy Links:
Amazon: Coming Out of Her Shell
Smashwords: http://www.smashwords.com/books/view/61329
All Romance Ebooks: Coming Out of Her Shell
He was there. Susan could feel his eyes on her, even if she couldn't see his face. His balcony was in shadows, but she knew he was watching her. The very thought that he watched her in such an intimate, vulnerable moment was both thrilling and shameful. She couldn't believe she was doing this. Again. She should stop. Just get up go back inside the house and get back to her normal and predictable life. She was crazy to play this game. She knew nothing about him other than the easy going image he projected.

Sure, he was beautiful to her. Tall and lean with a natural athletic build. The kind of body that said he stayed active rather than pumping iron. His slightly shaggy, black hair gave him a lazy, relaxed appearance that belied the intelligence he sometimes let slip through his "don't take me too seriously" exterior. If she had to catalog his features, she'd say that individually they were fairly ordinary. He had a broad chin, straight nose and perpetual five o'clock shadow. His eyes were the exception. They were otherworldly. Emerald green, they had captured her the minute she'd seen him at the neighborhood block party the first week she'd moved to Chester Park.  The sum of him took her breath away. He had a casual grace when he moved that said, "I'm okay with who I am, so fuck off if you don't agree."

She hadn't spoken to him that day. Hadn't said anything more to him than "Hi" and "How are you?" since she'd moved in three months ago, despite living next door to him. She thought of him though. In fact, she was beginning to fear she was obsessed with him.

She'd learned his name from one of the neighbors ... Eric Tanner. Such a simple name, it rolled off the tongue beautifully. She savored its syllables, sucked them into her mouth like the cherry off the top of a sundae. She loved his name; she longed to use it intimately. To whisper it in his ear as she nibbled on the lobe. To scream it as she came around his cock and milked his climax from him.

A slight breeze stirred the air, feathering across her exposed breasts. She imagined the whisper kiss was his lips and was lost to the fantasy. Her nipples tightened painfully and moisture flooded her core.

She hadn't meant for him to see. This game they played hadn't been planned. It had been totally accidental. Truly. But, playing with Eric was seductive. Like dark chocolate, it made her ravenous and one bite was not enough. It was a heady mixture of power and vulnerability that she never wanted to end even though she knew she should stop. She would stop. She wouldn't do it again. She couldn't do it again. Not if she wanted to respect herself.

It had started so simply. She had decided that she needed more personal time and changed her schedule at work. Truthfully, she was bored out of her skull. She'd been a corporate shepherd watching diligently over her human sheep for over 15 years and she hated it more everyday.
She was 35-years old and her life was so routine it put even her to sleep. All she did was work. QuestCom ran like a well-oiled machine. Never let it be said she didn't do her job. She was efficient, organized and effective, but about as fun as a tax auditor. She had no real friends, she'd never been married or in a truly serious relationship and had no children, though it could be argued that her Pug, Roxy, was her baby. She simply didn't know how to relax and be herself with people. Men especially. Once "cold fish" had become a recurring theme in the bedroom, she'd sworn off men. What was the point? She couldn't relax enough to try some of the things they wanted her to do and she got tired of the complaints.

It wasn't that she blamed them. Even she got tired of the missionary position. Nor did she think it would be very fun to screw a woman who could barely tolerate having sex with the lights on. She was repressed and she knew it, but so far there hadn't been anyone worth making the effort for. So, to balance out her failure in the dynamic woman department, she'd made a point of being the best employee she could be. Her career had skyrocketed and she was the youngest Chief Operating Officer in her company's history. She was good at her job, but she hated it. She excelled in her role, but she was bored and it showed.

She hadn't known he was there that first time. She had simply gone out for a swim. After doing enough laps to leave her breathless, she'd put on her sunglasses and hat and stretched out on her favorite lounge chair to let the sun dry her off.

She'd lain there trying to remember the last time she'd had sex (two years) and fantasizing about Eric. Wondering if he was involved with anyone. Imagining him naked and plunging into her. Without any conscious thought, she'd begun to stroke herself - outside her bikini bottoms because she never touched herself directly - until she brought herself to orgasm on the sheer fantasy of Eric.

As she'd struggled to catch her breath, a sound like a chair being pushed back drifted to her from the direction of his balcony. She opened her eyes in time to see the object of her fantasy stand up and turn to go inside.

She'd been shocked. Mortified. Humiliated. She'd stumbled to her feet and run inside as fast as she could. After locking the door, she'd slid down the wall and sat there on the cold marble tile with her arms wrapped around her knees rocking as she tried to calm the nausea roiling in her belly.

And so it began. Over the weeks, she'd become more and more brazen. Touching herself in ways she'd never had the courage to before. Rather than feeling embarrassed by Eric's presence, she was emboldened. She didn't even bother with a bathing suit now.

One evening, after making sure his car was gone, she'd gone so far as to arrange the lounge chair so that the angle and distance would be such that, even though he'd have a good view, he'd have to pay close attention if he really wanted to see her.

She performed for him every Thursday afternoon at two o'clock without fail. Today was different though, today was her last performance. She'd promised herself she would stop this madness. She was becoming consumed by the fantasy of him and she couldn't take it anymore.