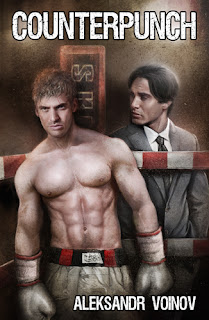 Tell us about yourself.
I’m a German working and living in Greater London, UK, and by day I’m an editor in a bank (they need it, too!). I’m a historian by training, a bit of a military geek, and I hear voices of people that don’t exist.

When did you know you wanted to become a writer?
I’ve always made up stories – ranging from why exactly I couldn’t do my homework to an elaborate story about how and why we’d play “catch”. Becoming a full-time writer was never really a question; of course I’d get a “real job” first, that was how I was brought up, and, besides, when I couldn’t get a job in Germany during one of our recessions, I tried the “starving artist” gig, and it was no fun. But by then, I’d already published a couple novels, short stories, and even poems, and realized if I can juggle three jobs, my studies, and everything else on top of the writing, I can probably juggle a real life career. And that’s what I’m currently doing.

Where and/or how do you find the greatest inspiration?
Inspiration just happens – and it’s so random that I can’t even say where it comes from. But when I’m actively looking to fill the well, I’m reading non-fiction books about something I didn’t know anything about or only had a working knowledge of. It always triggers something, eventually. I read very widely – newspapers, some political and technological blogs, and I’m a book addict, so there’s always something to discover. But it can be a TV documentary or anything else. My family is sometimes good for inspiration, too.

Which appears first when contemplating a new project: A character, the plot and/or the title?
Always a character. It’s like I’m hearing this voice in my head and I start talking to the character, who eventually tells me who he is and what his problems are. The rest grows from there. The plot relates to the problem – so, say, Brooklyn shows up in my head and eventually he tells me that “his life is messed up” and “he made a mistake”, and “lost everything”, and he’s now a slave boxer. So, there’s the problem and the central conflict – guy has lost everything and just wants it back. Then it’s just about telling that story in a way that is interesting for readers.

What’s the hardest part of a novel for you to write: Beginning, middle and/or end? Why?
About one third in, I invariably start to falter and second-guess myself, so getting from the first act to the second (or third, if you’re using the five-act scheme) is the biggest issue. Once I’m past that, it’s usually more or less easy. I guess it’s because the initial enthusiasm wears off after all the pieces are in place and I suddenly realize the amount of work I still have to do. It’s the “oh crap, this is actually WORK” moment. I realize that writing isn’t actually that easy. Every time. You’d think I’d know by now, but of course every project is always different, won’t happen this time – and then you get stuck in the same pattern.

Has your own life influenced your novels? And if so, how?
Certainly the themes I write about. Being a stranger in a strange land is one of my themes, and yep, I’m a German “in exile” in Britain. There are also reasons why my characters have invariably family issues (usually an unpleasant father), and so on. So, yeah, the underlying theme is usually in some way autobiographical.

Writing sex/romantic scenes can be a challenge for some authors. Do you find it difficult? If yes, how do you compensate? If no, from where do you draw your inspiration?
I don’t find them difficult at all, because they just happen, usually driven by the characters who can’t wait to jump each other. I’d say writers should only write what they are comfortable with, anyway, and it seems I’m comfortable writing really quite explicit, somewhat frequent sex scenes.

Are your characters based on people you know? Or are they completely fictitious?
Sometimes I steal bits and pieces of people I know, have met or have heard about. The book where I’ve done that the most hasn’t been published yet, or I could give examples. Otherwise, no. The bits I take are way too small to recognize anybody.

Who is your favourite character, which you’ve created? And why?
It’s always the one I’m currently writing, so that’s Silvio of Dark Soul and William of Lion’s Share. Both are intense characters – William is passionate, loyal, impulsive, and very honorable. He’s a proper knight with some small problems (like his impulsiveness), but I’d so like to have him in my corner if I’d run into trouble. Silvio is much darker, just as passionate, but way more messed up. Still, his capacity to be selfless and generous (and ruthless and cold) is astonishing. Characters get to live all these incredibly strong emotions – all bold colours, which does enrich my own life, which is more sedate and much more routine.

Tell us about your newest release!
I’ve just published “Counterpunch” with Storm Moon Press, a novel about an enslaved boxer in a version of current-day London who is fighting for his freedom. Brooklyn Marshall is a good guy who made some terrible mistakes (and he knows it), so it’s really a story about hope, redemption and love. I had a lot of fun with the research, from the boxing scene, actual boxing matches, to slavery issues. Also, I did enjoy writing about a darker version of London, where I work. And the fact that the big riots happened just as I was editing the book was simply surreal (they even expect some right in the place where Brooklyn killed the protester when he was a cop. Life imitating art, I guess…).


Brooklyn Marshall used to be a policeman in London, with a wife and a promising future ahead of him. Then he accidentally killed a rioter whose father was a Member of Parliament and had him convicted of murder. To ease the burden on the overcrowded prison system, Brooklyn was sold into slavery rather than incarcerated. Now, he's the "Mean Machine", a boxer on the slave prizefighting circuit, pummelling other slaves for the entertainment of freemen and being rented out for the sexual service of his wealthier fans.

When Nathaniel Bishop purchases Brooklyn's services for a night, it seems like any other assignation. But the pair form an unexpected bond that grows into something more. Brooklyn hesitates to call it "love"—such things do not exist between freemen and slaves—but when Nathaniel reveals that he wants to help get Brooklyn's conviction overturned, he dares to hope. Then, an accident in the ring sends Brooklyn on the run, jeopardizing everything he has worked so hard to achieve and sending him into the most important fight of all—the fight for freedom.

The enemy was swaying on his feet, too tired to lift his hands, but Brooklyn kept pushing him into a corner. Eight rounds in, he was tired and yet buzzing high on adrenaline and sheer, uncontrollable rage, delivering low punches into the enemy's sides, his solid resistance like a wall he wanted to tear down with his bare hands.

The enemy squirmed under the onslaught, rounded his back and stumbled away, but there were only the ropes, and beyond it, the baying mob.

Brooklyn kept punching, hitting, then noticed that the enemy had lowered his guards to protect himself. He responded to the weakness the only way that made sense to his adrenaline-dazed brain. He took a half step back and delivered a straight punch with the right and a cross with the left. Like in slow motion, the power from that cross tore the man's head to the side, Brooklyn saw a flash of the yellow mouth guard, and then the man
went down as if struck by lightning.

Before anybody could interfere, Brooklyn caught him him by the throat, pushed him up against the ropes and kept punching him. The rage knew no bounds, burning in his veins, turning the exhaustion to ashes, drowning out the shouts from the mob.

The enemy opened his arms, to try and grasp the ropes, but for a moment he was spread open in a T. Unguarded, unprotected, throat bared, head rolling back. Unconscious, dead, or simply KO, that strange stage when every ounce of strength and endurance had been beaten from his body, leaving only leaden indifference—or a readiness to die.

And it was a mercy to be killed on his feet, in the ring.

Just for fun–
What is your favourite colour(s)?
Teal.

What is your favourite movie? And why?
Too many to choose – it’s a mood thing. Last thing that knocked my socks off was Das Boot, a mini series about a German submarine crew in WWII.

If you could be anyone in the world who would it be? And why?
Nope, I’m quite happily who I am.

Where do you see your writing career in the next five to ten years?
The idea is to get better with every single book. If people love them, even better.

The book sounds very awesome, Aleksandr. Aside from hockey, boxing is a favourite sport, so I think I might enjoy reading it. I wish you the very best! ~ Blak Rayne
Posted by Blak Rayne Books Blog at 10:00 PM