BEING A SWITCH HITTER

Being a Switch Hitter

Good afternoon fans. This is wicked gal again and as always thanks to Blak Rayne for having me here. Usually when I post here, I like to get all dirty sexy for Blak and give a post about something controversial. We’ll, it might be that but nothing too sexy today, just my writing and how occasionally I like to switch it up a little.


Recently, “the head” decided to try her hand at the backbone and vanilla if you will of erotica, the dreaded m/f. *giggles* No, only joking, I know it’s not dreaded but the basis of erotica romance is still hetero writing and I suppose we’ll just have to deal with that fact. However, it doesn’t mean we, meaning her and us the muses, have to totally stop doing everything else in order to be more “known” in the genre.


These days, writers in all genres like to do something alternative to what their used to. If they are mostly het writers, they may switch their names to do m/m or f/f or mmf Nothing wrong with this, they might think people won’t like that they’re doing something else different and that’s okay. However, me, Michael, and Rawiya have done both m/f and m/m up to this point and we won’t be changing names.


What? You didn’t know Michael did an m/f? Well, it’s not out yet. I’ll tell you, he won’t be doing anymore once he finishes the series but me and Rawiya like to switch up and do a little bit of each. Rawiya has an mmf coming out in April from Naughty Nights Press called, Living in the Now and I have a het piece out in the NNP anthology for Halloween, Wicked Wanton Hallows Eve called Dream of Dalian. 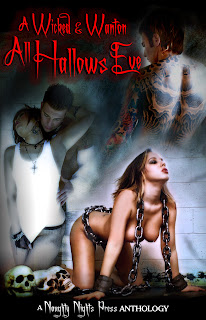 Buylink
Nothing wrong with that at all, as a matter of fact, I liked writing the m/f and have subbed another piece to Rebel Ink with hopes of another published story. My idea? Not to become predictable and that’s how Sharita feels about all of us. Besides, being a full hetero female you might get the inkling to write something you’re already used to doing. *snicker* Whatever the case, there is no issue with occasionally dabbling into something different.


So what do you think? Is it okay for your fave author to dabble in and out of genres? Authors, are you set in the genre you’re writing in and refuse to change?


Whatever the case maybe, it’s definitely a personal choice.


Thanks to Blak for having the Wicked Gal here again. I’ll be back with a smexy post on the next visit. I’ll be inspired I’m sure since I’ll be going to another rock concert tonight!


Enjoy the rest f your Saturday 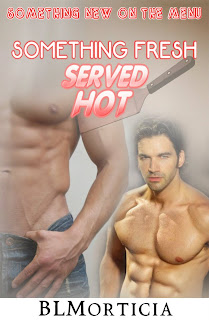 
Will he do what his body wants? Will Alex accept his advances even though he will soon become Jimmy’s boss?

Later on in the day, I was making my way to the john when I noticed Alex sitting down in George’s office looking over some papers. I was on my way out of the place since my shift was over and my hot night with Zena was in the next hour.


When we exchanged glances, he waved his hand at me. “Jimmy, hey, can you step inside a moment, please?”


I exhaled before going into the small space and closed the door behind me. I had been in George’s office a little too many times for my taste so needless to say, when I went in I was a little nervous about talking to the new boss to be in here.


Still, I thought this to be the perfect time to let Mr. Seidling know my boat doesn’t float that way. Once I got in, I sat in the wooden chair in front of the desk.


“Hey, Jimmy. I was just looking over some things and it seems like you’re in need of a raise my friend. How could you just let George stiff you all these years?” Alex shook his head while still glancing at the large sheet of paper.


I cocked an eyebrow. He was definitely right about this observation.


Okay, maybe he ain’t so bad after all.


I ran my hand though my brown mane. “Well, I need the job and um…well, I make okay money, or…”


“No you don’t, Jimmy,” he interrupted. “At the last restaurant I managed, the top cook was making twenty-two bucks an hour. The owner felt it was necessary to pay him well because he kept the customers happy. Not to mention, he was quick, polite…”


I cut him off. “Wait, did you just say twenty-two dollars, an hour?”


Alex chuckled, “Yeah man. You’re only making fourteen. Dude, seriously, you’re getting robbed, yeah. I’ll make sure I let George know he should raise you up to at least eighteen effective immediately.”


My eyes bulged when he said that number. I was trying to keep my excitement in but I couldn’t help it. All the things I could do with making eighteen dollars an hour. A new car, a better apartment than the rat hole I was staying in, and damn, some better clothes. I may be a cook but I like to look good when I step out with the ladies.


“Gods Jimmy, I cannot believe George mimics the guy on that cartoon, what’s his name?” He looked up at the ceiling and snapped his fingers.


I laughed when I thought of my favorite show other than Sportscenter. “Spongebob and you’re talking about Krabs…he’s a tight wad.”


Alex giggled and placed the papers on the furniture in front of him. He locked his eyes with mine, making me a tad uncomfortable. “That show is hilarious.”


We shared a laugh and even though we seemed to be getting along great I had to remember why I was here.

Man, I did come in here to tell him something…oh yeah…

I nodded, “Yep, it’s full of laughs. Hey…um Alex…I was uh, noticing the eye you were giving me earlier.”


Suddenly, I froze. As much as I wanted to tell him to stop staring me down like a piece of meat, I thought twice about how to phrase it, especially since the guy told me that he’d be telling George to give me a four dollar raise. I sighed. “Um, yeah dude, was there a reason why you were looking at me like that?”


Alex smacked his lips together and rolled his eyes. “Oh Jimmy let’s not play games here. You know I was checkin’ you out and don’t tell me that you don’t go that way because I really don’t care that you do. Besides, it’s nothing wrong with looking. Just because I’m taking a gander at your tight fitting jeans to go along with the snug, black tee shirt that you have on, it doesn’t necessarily mean I want you.”


I leaned back in my chair and turned up my lip. “Oh yeah, then what would you call it?” I crossed my legs. I had to hear this.


“Well Jimmy consider this, when you look at a tasty dish that catches your eye on a menu does that mean you have to order it? And, in your terms, being the macho heterosexual that you are, do you go after every girl you see walking by? Maybe you do. Let’s just stick to the first example, yeah?”


It was true what he was saying but then after he completed his sentence, I wondered why he didn’t want me. “Well damn, why don’t you find me attractive?”


“Oh Jimmy, I didn’t say that. I just don’t see why I should order you at this time. There are plenty of obvious reasons. The most important being that you’re so fucking manly it hurts. I can tell just by the way you walked in here that you’re trying way too hard to be a man.” Alex leaned back in his chair with a smug look on his face.


“What? That doesn’t make any sense.” I stuffed my hands in my pockets and looked at him sideways.


“Fuck Jimmy, when we were in the kitchen you weren’t wearing any mitts or using a towel to get hot buns out of the oven. Why? Because you think it might show you as weak. You’re probably one of those who watches sports shows, drinks beer, and puts your hand down your pants while scratching your balls with your legs wide open, just because you think that’s manly.” He put his hands up, signaling quotes. “Ugh, I know you’re your type, Jimmy LaCosta. The name fits you too, Italian American, yeah?”


What the fuck, why did he just read me like a book?


Thanks so much for stopping by, BL! It's great to have you again. Your new books sound great. I wish the best of success.
Blak Rayne ^_^!!
Posted by Blak Rayne Books Blog at 4:11 PM