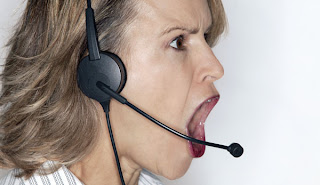 Yesterday, I received no less than eight calls from different telemarketers, and this doesn't include another two calls where it was just a recording - 'You've won a cruise!' and 'Want to lower your credit card debt?'. Lately it's been fund raising organizations and people from overseas offering to fix my Microsoft computer (which is a huge scam people so beware). Soon as you offer to link up with them at their website, they hack your computer or charge you $150.00 to repair it. How many times do I have to say it - F*** off! I don't use Microsoft for f-sake! I'm MAC-ified. I'm so sick and tired of the nameless and faceless entities that stalk my phone line like it's they're personal hunting ground. And they do it at the most inopportune times! Dinner, while you're heading to the toilet, watching an awesome action scene in some movie, during sex - when I'm writing!

I won't buy your shit! I won't support your shit! So bugger off! I've actually spoken to people like that. I've been driven to the point, where I swear and threaten legal action. Well, that was the old me. Now if I'm in the mood I toy with them or just hang up. It's become a fetish to see what wonderfully evil one-liners I can come up with.

I had a lady call about life insurance. She went on and on about how my husband and I should get more until I said. 'Sorry, but my husband passed away yesterday, so I don't think your insurance is going to help me now…is it?' She was stunned and hung up. Oddly enough that company has never contacted me since.

Now you might say to yourself OMG Blak how could you say such a thing? Well, let me tell you it just becomes easier and easier once you get over the nervousness. I don't allow these people to phase me any more. I either lie and giggle about it afterwards or I just answer, let them yammer on and then hang up.

Another time I actually said. 'Wow and I just read on SNOPES that you guys are scammers.' The guy freaked trying to convince me that was an inaccurate accusation then I hung up. Yep, I lied.

One time I answered the phone. 'Pearse's mortuary - you stab 'em, we slab 'em. May I help you?' The women immediately hung up.

The most belligerent telemarketer called me a lousy bitch because I refused to give her my credit card number in support of some sick babies society. I actually hunted down the company and issued a complaint. Upon reflection, I was pretty pissed when I spoke to that poor woman. She didn't deserve the verbal thrashing, but the telemarketer did. And believe me I can give it when I need to.

The problem today is you never really know who you're talking to. Is it really the Cancer Society? Sweeties, we are living in desperate times. People are out of work and broke. And not everyone is honourable. You have to be wise. I have tried blocking calls, but it never works. These organizations and scammers just use a different one and whoops - you're back on their list!

Anyway, just for fun I've added this wonderful informational post from another website called: 'How to Deal With Telemarketers'. Some of these ideas I am going to try! Hilarious!

How to Deal With Telemarketers
Posted by Blak Rayne Books Blog at 2:24 PM