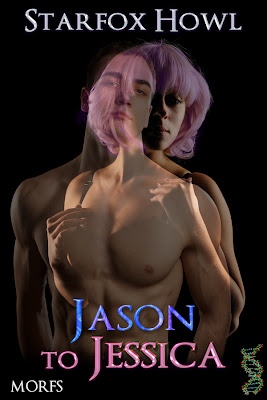 Hello sweeties, today's guest is Starfox Howl, a fellow erotic author and 'co-worker' so-to-speak from eXtasy Books. Please welcome, Starfox. Enjoy!
Tell us about yourself.
Married to the same wonderful woman for just shy of twenty eight years. How she’s put up with me for this long, I’ll never know. In the work-a-day world, I’ve done a lot of things, I’ve been the Texaco man, a volunteer fire fighter, police officer and a US Navy veteran. For the last four years, I’ve been working various places in Afghanistan as the voice you hear when you call 1-800-HELP ME! for IT problems.
When did you know you wanted to become a writer?
I’ve always had the writing bug. It came into full force during elementary school in English with creative writing assignments. In high school, I learned a lot about newspaper journalism as a member of our DECA club and as the Cadet Public Affairs Officer for the Civil Air Patrol squadron based at MCAS Cherry Point, North Carolina. My first published writing was in the base’s WINDSOCK newspaper. That was it for thirty plus years until Jay Austin at Extasy Books accepted a manuscript I had been working on while in Afghanistan.
Where and/or how do you find the greatest inspiration?
Inspiration is all around us. Sometimes it comes out of the lives that we have lived, our experiences, the snapshots burned into our memories of not only tragedy, but our triumphs over self and other obstacles.
What made you chose to write erotic literature in particular? And is there any other genre you’d like to write? And if so, why?
I don’t think I consciously chose to write erotic stories. In Jason to Jessica, the genesis of the story, like so many others was a “what if”. What if a man, due to some mechanism beyond his control, has his body turned into that of a woman. How would he react, how would he adjust? I felt that it would have shortchanged the story and the reader to leave out the sexual aspects of Jason making the transition fully to Jessica.
As far as moving into another genre, the one that interests me the most would be paranormal. There’s such a vast landscape that’s covered by that, ghosts, demons and angels, furries, vamps. I’ve always like a good challenge.
Which appears first when contemplating a new project: A character, the plot and/or the title?
The title comes last. I’ll have a file name for it on the computer for convenience, but it will get renamed sometime before getting shipped to a publisher.
As for the others, character or plot, I’ve used both. In other, unpublished stories, the character came first. In another, the genesis was a writing prompt to use certain words in a scene of four hundred words or less. That WIP has expanded to four chapters.
What’s the hardest part of a novel for you to write: Beginning, middle and/or end? Why?
The end, definitely, the end. If I get into a good story, I don’t want it to end. I want to know what happens to the characters with the turn of the page. As a writer, I know I have to end the story, that doesn’t mean I have to like it, so I try to leave an opening for a sequel.
Has your own life influenced your novels? And if so, how?
Yes. I don’t think there is a writer alive that hasn’t put some of their own life experience into their writing. In Jason to Jessica, Jessica stands up at the father’s Regimental Reunion and makes a toast. … I’m mad as hell at you for leaving, I’m proud of you for serving, and I love and miss you terribly. My father, a former Marine, served in Viet Nam. While he wasn’t killed in action, it has taken a long time to put the emotions that surround my relation with him to rest.
Hemmingway has the best take on all of this, “Writing is easy, all you have to do is sit at the typewriter and bleed.”
Writing sex/romantic scenes can be a challenge for some authors. Do you find it difficult? If yes, how do you compensate? If no, where do you draw your inspiration?
So far I haven’t found it hard to write a sex scene. I will say that what ends up in the final story may not be what was first drafted. I’ll go back over a passage again and again until that internal bell rings to tell me the scene is done.
Do you have a method you use to write the sensual parts? Do you prefer the sex to be open and bold? Or left to the imagination?
I’ve written sex scenes both ways, but it has to match the characters involved and the story. What I don’t like are bedroom scenes that are overlong, to the point that they are boring. A reader’s imagination is a powerful thing and authors need to make use of that. In some instances, cutting back on detail and getting the reader’s mental view screen involved can change a scene from one the reader skims over to one that make them go ‘oh wow!’.
Are your characters based on people you know? Or are they completely fictitious?
Fictitious. Bits and pieces of people that I’ve known may have crept in, but I’ve not deliberately sat down and crafted a character after anyone that I know.
Who is your favourite character, which you’ve created? And why?
Oh, that’s easy. Katie Lynn Milner. She is a wolf anthropomorphic character who’s part of the MORFS story-verse. She’s one of those characters that can get away with a lot, but who also has a lot of troubles, balancing her primal nature with the civilized world.

Jason to Jessica is available from Extasy Books. (Buy It Here)
Tammy arrived an hour before the start of the show. As usual she came upstairs, dropped her costume bag in the guest bedroom and started changing out of her street clothes, unbeknownst to me at the time. I came out of the hallway bathroom in just a towel around my waist and walked into what was now my bedroom and caught Tammy sitting at the makeup table in the altogether.
“Oh, hi, hon,” Tammy looked at me in the mirror unconcerned about her nudity. “I thought I was scheduled with Venus. She didn't tell me there would be a new girl.”
“You are scheduled and I'm a new girl,” I replied recovering from the surprise. “I'll be doing the engineering.” I wasn't sure I wanted to be outed this way.
“Jason does the engineer...” Tammy gave me a serious look in the mirror, her hand hovering in mid-air with a large makeup brush. “Jason?”
“What's left of him,” I replied. “It’s Jessica now.”
“Lordy, Lordy, girl let me have a look at you!” Tammy squealed getting out of the vanity chair and turning toward me. “Hot damn girl! You're making me jealous just standing here!” Tammy laughed and held out her hands and we hugged as girls do. Pressed together the way we were was too much for a certain bit and it reared its head. Tammy felt it and held me at arm's length.
“Is that what I think it is, girl?” she asked dropping her chin and looking at me straight on.
All I could do was blush and nod in embarrassment.
“Wait a minute.” Tammy looked at my breasts. “Those look way too good, there’s no way those are implants.” Tammy searched my face and suddenly the light came on. “You got morphed?”
I nodded. Tammy hugged me again this time not pulling away when I got hard under my towel.
“Now I am jealous, totally one hundred percent green-eye jealous.” Tammy laughed holding me close. Her smile faded and her face took on a serious look. “How are you holding up, hon?”
“I don't know, Tammy,” I told her. “One minute I'm doing pretty good, and the next...” I shrugged.
“It's going to sound trite, but it does get easier.” The tall, coal black woman looked me in the eyes. “The first time I went out after having my top done, Lordy, I thought I would die of nerves. I was waiting for devils with pitchforks to jump out and carry me off.” We both giggled. “There's another thing, Jessica.” Tammy pulled my chin around so that I was looking directly into her dark eyes. “I did this to myself. I doubt that you were hoping to wake up one morning with a rack and a half, and killer curves.”
“No, I don't remember wishing for that,” I replied quietly. Tammy's genuine concern was helping soothe my raw nerves.
“We can talk more if you want.” Tammy walked back to her costume bag and pulled out her purse. She fumbled around in it for a minute then pulled out a card with her name and mobile number. “If you need to talk during the day, give me a call. If I'm busy and can't pick up, just leave me a message. I'll call back as soon as I can.”
I took the card.
We hugged again and Tammy turned back to touching up her makeup and getting dressed for the show.
Just for fun–What is your favourite colour(s)?
Blue.
Which do you prefer a great hero or a great villain?
A great villain. They take more skill to write and make interesting, rather than a cardboard cutout that’s used as a foil for the hero. The play between the hero and villain can make for a great story.
What is your favorite movie? And why?
I am showing my age here, but favorite would be “In Harm’s Way” with John Wayne.
Overall, it’s a love story, the love of a man for his country, even after it’s betrayed him and the love of a man for his friend. Torrie never gives up on, or is willing to betray the memory of Eddington, after he learns that Eddington was the ultimate cause of a young nurse’s suicide. It’s also a love story between Nurse Lt. Haynes and Torrie.
If you could be anyone in the world who would it be? And why?
I can’t think of anyone that I would want to trade places with. I’m right where I need to be this time around.
Where do you see your writing career in the next five to ten years?
Writing better stories is a given. I don’t see this as a sole source of income, not until I retire from my day job. But I would like to think that the stories that come out over the next decade will have better name recognition and greater sales than what I have at the moment.
Starfox Howl.com
Thanks for stopping by, Starfox! It was a pleasure to have you @ BRB. I wish you the very best for the future.
Blak Rayne
Posted by Blak Rayne Books Blog at 10:15 PM