We’ve all seen them before, sexy ads that push the envelope of what is acceptable and what isn’t. Calvin Cline’s Eva Mendes ad with flimsy material raised hackles in SoHo.

And then there was Kylie Minogue’s Agent Provocateur ad. Watch if you dare. http://www.youtube.com/watch?v=jP0ZxnRG3ZY

A guy complained because he didn’t want his daughter seeing the guy’s penis. I’ve studied this photo, yes I know it’s a tough task but someone had to do it, and after hours of studying I really don’t see the guy’s penis. Maybe the photo is cropped a little but low on his hips but his little doo-daa isn’t showing.

How much censorship should be applied? Go into any art museum and you’ll see full nudes.

The guy is totally nude and petting a cock. Okay, so that was a bit of a cheap shot but he is stroking that rooster and he’s not wearing any clothes.
Da Vinci’s Angelo Incarnato is nude and thought not picturesque, is very graphic. 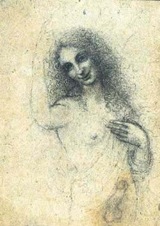 I’m partial to Daniel Skinner’s work. Skinner is a contemporary photographer that shoots mostly males. Daniel’s lighting works magic on the male form, allowing the planes and curves of the male form to show.

I’m not sure when we got so prudish that a bit of nudity makes us so squeamish that we can’t enjoy the beauty of the human body. It seems that the more conscious of nudity we’ve become as a society, hiding our bodies from our children, the more conscious they have become about how unacceptable they are. Eating disorders are actually on the rise in children according to the National Eating Disorders Association. The article can be found here. Eating Disorders
The only nudity children are exposed to are model thin waifs of the fashion industry. Daniel Skinner uses men with meat on their bones and I’m sure if he did photography of women he wouldn’t discriminate against size in that venue either. When you go back through history and see all the beautiful paintings not one of the subjects is model thin. 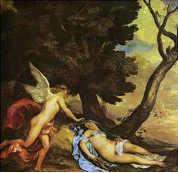 Sir Anthony van Dyck’s Cupid and Psyche show the body beautifully. Our reluctance to accept the beauty of the human body is causing more harm than good. I say embrace nudity and the beauty that is the human body. Allow books to have the cover that the artist and the author see fit to have.
Erotic romance is sensual and provocative. It brings to light the imagination and what can happen between two people. Sex is part of a couple’s loving relationship. Ignoring that part of the relationship helps no one. If you personally don’t enjoy erotic romance then don’t seek it out. Avoid the entire genre and encourage others to avoid it if they feel incline to force their strictures on others just because they don’t like any nudity on book covers, in ads or anywhere else they see it.
The beauty of the human body needs to be celebrated again instead of dictated. Go to an art museum and take your kids. Let them see paintings and discover for themselves that their body isn’t embarrassing or wrong. That they can be happy with their bodies and love themselves. Maybe then many of the neuroses about size and bodies could be eliminated and our children would be happier.

For information about Sara York Books visit my website at http://sarayork.com