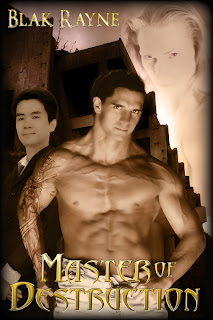 Master of Destruction
‘Caught between deception and the truth, some secrets are best left unspoken.'

The smuggling ring has scarcely been shut down, when the body of a dead slave is discovered inside a dumpster outside the Pink Flamingo, another seedy nightclub in District D. The victim is only the first, in what soon becomes a string of bizarre murders. As the investigation progresses, everyone is labelled a potential suspect. The slave community is fearful of what might be lurking in their midst.
Death and disorder comes in spades. Mr. Shiru’s in deep trouble with associates from overseas. Amanda is nearing the end of her third trimester and Algar Flynt is after the Beautiful Dragon once again. Then the murderer makes an attempt on a friend’s life and the clues lead Sloan to a very disturbing conclusion. Could it be one of his own killing the slaves of Avalon or could it be much worse?
Excerpt:
Sloan found himself guided away from the bench, towards the parking lot and Monte Carlo. “Why did you drag me back here?”
“Be patient.” Vale let go of his hand.
“Not here…shit…” Sloan nervously looked around as the slave removed all his clothes from the waist down.
Using both palms to lift his buttocks, Vale laid back on the hood of the car. The metal was still warm from the heat of the engine. His bare heels pressed into the bumper for stability so he wouldn’t slide off and then, he reached back above his head and held onto the top lip of the hood. A cool breeze caressed his privates. “I’m waiting.” Vale grinned.
“Seriously…you want me to do you here, babe?” Sloan glanced about worried someone would catch them any minute. “In the middle of the park? Where anyone can see us?”
“That’s why I took my jeans off.” Vale chuckled, Sloan’s face had drained to an abnormal pale. “Haven’t you ever done anything adventurous?”
“Of course, I’m not a prude. I screwed a girl behind the bleachers once during recess.” Sloan hurriedly unbuckled his belt and undid his jeans. “There were other kids everywhere.”
Vale was surprised. “Recess?”
“My God babe, not elementary school, high school–first break! I’m a pervert not a pedophile!”
Vale’s head fell back with low laughter then he groaned and his grip on the hood tightened. Sloan’s tongue impaled his hole, making it nice and wet then the man’s thick cock slid in, he pumped once, gentle and slow to expand the path. As every time, the initial penetration was uncomfortable but in seconds, that feeling would slacken giving way to pleasure. The more Vale relaxed his muscles, the more enjoyment could be had. The wet that circled his anus was cold but the rest of his crotch moderately warm.
“I’m really hard.” Sloan held his legs straight up by the calves and kissed his ankle.
“I know, and I like it when you’re extra hard,” Vale purred, stroking his own cock.
Happy Yaoi Hunting
Blak Rayne ^_^!!
The release date is this week, July 15!
http://www.extasybooks.com
Posted by Blak Rayne Books Blog at 9:03 PM