Here is my official excerpt for 'Master of Illusion' due for release on June 15th (next week) through eXtasy Books! My edits are done and I'm off to the races! I'm very excited and can't wait to see MOI finally complete. Phew! LOL Anyway, the second novel in my Benevolence series will be published on July 15th 'Master of Destruction' - back to edits! Thanks for reading, and I hope you enjoy.
http://www.eXtasybooks.com 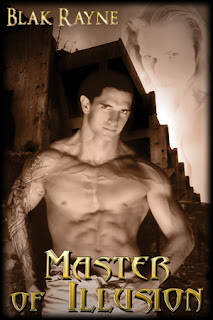 'Master of Illusion'
'Caught between innocence and evil, some souls are destined to entwined.'
Blurb:
Something evil lurks in the streets of Avalon. From the spread of an illicit drug called Ice to the black market slave trade. The year is twenty-three thirty, nearly two decades after WWIV and the world, as we know it, is a very different place. Under the rule of one government and a questionable military, no one is safe. Laws are convenient for those who legally prey on the weak.
Forced into slavery, one man seeks freedom. Obligated to his profession, the other seeks justice. Exploitation, human trafficking and drugs—brought together by corruption and fate, a bounty hunter meets a slave and their lives are forever changed.

Excerpt:
“All right, since I’ve screwed up royally, let’s start from the beginning. I’ll need all the information I can gather to save my hide—if I end up in court. How old are you?”
Vale followed him into the kitchen. “Twenty-eight.”
Sloan paused before pouring himself a cup of coffee. “Shit…” he mumbled, then without looking, held out a second mug of the steaming black liquid. “Come on, take it.”
“Thank you.” Vale held the mug in both hands blowing on it.
“You’re pretty young.” Sloan took a sip of the coffee, then collapsed in an armchair on the other side of the living room. “Too young to be hanging around me.”
“I’m not that young.” Vale sat on the ottoman across from him. “How old are you?”
Sloan didn’t want to frighten the guy off, he’d grown accustomed to having him around, but at the end of the day there was no use in lying, so he was blunt. “I just turned thirty-seven and I’m considered a dinosaur in this business.” He smirked glancing in the slave’s direction. “I figure once I get you home, I’m done—you know, retired. There are lots of younger more able bodied guys, who are in far less pain than me, that are willing to do my job and charge less.”
* * * *
Vale carefully shifted closer—as close as he dared. His heart was banging out of control and he couldn’t stop staring. In spite of what others said, the hunter was extremely good-looking in his own way. Vale didn’t fully understand the attraction, but he couldn’t seem to refute it either. He’d never felt this way about anyone. He wanted them to make love. “You aren’t old, you’re unbelievable.”
* * * *
“Flattery. Nice try.” Sloan wore a crooked smile at first, then frowned as the slave knelt between his legs and put a hand on his stomach. His dark eyes were dead and they switched their focus to Vale’s violet ones. The slave brought him to a craving he was finding increasingly difficult to ignore, his lips were supple and tenderly youthful, his features exquisite. Sloan wanted that golden hair to shower his naked flesh and he pictured Vale sucking his cock.
The slave cautiously pulled Sloan’s shirt loose from under the waistline of his jeans. His slender fingers rippled over the hunter’s washboard abs underneath. The young man bent forward, lifted the shirt and planted a few gentle kisses. His breathing was hot and felt good against Sloan’s skin—too good, he was afraid of what he’d do if the kissing didn’t stop.
Posted by Blak Rayne Books Blog at 4:36 PM