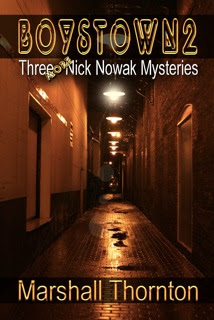 Boystown-Three-Nowak Mysteries: Purchase Link
Welcome everyone! The author interview blitz continues! Today we've got author Marshall Thornton - the punch of testosterone for the week! So let’s get this interview started. Who is, Marshall Thornton? Please tell us about yourself.
Okay, here’s my bio:
Marshall Thornton is an award-winning author, playwright and screenwriter living in Long Beach, California. Author of the Boystown detective series and the comedic novel The Perils of Praline, or the Amorous Adventures of a Southern Gentleman in Hollywood, he holds an MFA in screenwriting from UCLA. While there he received the Carl David Memorial Fellowship and was recognized in the Samuel Goldwyn Writing awards. Marshall has had plays produced in both Chicago and Los Angeles and stories published in The James White Review and Frontier Magazine.
When did you know you wanted to become a writer?
Gosh, I guess I was about sixteen. We read The Great Gatsby in school and I was so taken with it that I decided to be a writer. Writing sounded romantic and I already liked to drink.
Who and/or what prompted you to write your first novel?
My first published novel is The Perils of Praline, or the Amorous Adventures of a Southern Gentleman in Hollywood. It’s an m/m satirical comedy. When I was in college, the first time many years ago, I wrote a series of farcical, over-the-top letters to one of my best friends. She really enjoyed them, as did our other friends. She actually had one of the letters framed and it hung on her wall for years. When I decided to write m/m I thought it would be fun to do something in that voice. So, I did.
Where and/or how do you find the greatest inspiration?
Inspiration has never been very reliable. It comes when it comes. Mostly, I work hard. Every day. Usually in the morning.
What made you chose to write gay erotic literature in particular? And is there any other genre you’d like to write? And if so, why?
I wrote spec film scripts for about ten years and when I decided to stop I began checking out fiction again (I done a little publishing in the early ‘90s but it didn’t go anywhere). Anyway, I ran across a call for Christmas-themed gay erotica put out by Torquere Press. That was too interesting for me not to give it a try. Six months later I published “The Christmas Visit” with them.

Desert Run: Purchase Link
Which appears first when contemplating a new project: A character, the plot and/or the title?
Hmmm. Kind of the plot, though it’s usually such a small kernel I hate calling it a plot. For instance, the idea for my book Desert Run started during a trip to Palm Springs. I thought “Gee, it would be fun to write a book about Palm Springs. In the seventies. Something action-y, like a movie from the seventies.” It went from there.
What’s the hardest part of a novel for you to write: Beginning, middle and/or end? Why?
First drafts are never too hard for me – beginning, middle, end – it’s all about the same. The MFA program I went through teaches you to write a film script in ten weeks. Because of that experience, I can draft a novel in about twelve and not too hard. Now, editing. Editing is a bitch.
Has your own life influenced your novels? And if so, how?
Every writer’s life influences their work immensely. Even when you try not to write about yourself you are. That said, I’m not really much like my private detective character, Nick Nowak. I don’t like guns. I would never punch anyone. And don’t get hit on as often as he does. But, he does live in an apartment I once lived in and hangs out in a lot of the places I went to when I lived in Chicago during the ‘80s.
Writing sex scenes can be a challenge for some authors. Do you find it difficult? If yes, how do you compensate? If no, where do you draw your inspiration?
Yes, sex scenes can be difficult to write. When things get difficult I go do personal research. I highly recommend personal research. In fact, I should probably make a phone call…
Do you have a method you use to write the sensual parts? Do you prefer the sex to be open and bold? Or left to the imagination?
I’ve actually been writing some pretty graphic stuff. When I began I thought it was required of the genre. I’ve since learned that there’s a broad range. I find writing sex interesting, though. At this point, it’s kind of hard to imagine Praline or Nick Nowak without the sex.

The Perils of Praline: Purchase Link
Are your characters based on people you know? Or are they completely fictitious?
To a certain extent, yes. I do write characters based on people I know. I say to a certain extant because whenever you write from life it’s easy to get caught up in what happened. What happens in life rarely conforms to good story telling. I’d say people I’ve known have ‘informed’ my characters more than been based on them.  I have however had friends ask to have characters named after them.
Who is your favorite character, which you’ve created? And why?
I really enjoyed Praline Palmetier in The Perils of Praline, or the Amorous Adventures of a Southern Gentleman in Hollywood. But, I would have to say my favorite is Nick Nowak primarily because he’s more complex, more difficult.
Can you tell us about your latest release? Give a synopsis.
My newest book comes out April 13th. It’s Full Release from Torquere Press.
Studio accountant, Matt Latowski orders an erotic massage on the one-year anniversary of a bad break-up, but is surprised when the masseur calls him a couple weeks later to ask him out on a date. Unable to say no to a freebie, Matt begins a journey that eventually leads to his becoming a murder suspect.
As the police close in on him, Matt is left with no choice but to turn the tables and become an erotic masseur himself in order to find the murderer. Along the way he meets Detective Aaron Tripp, sparks fly as Matt wonders whether the detective might be the murderer, or the murderer’s next victim?

What’s your newest WIP? And when we can expect a publication date?
I’m putting the finishing touches on Boystown 3: Two Nick Nowak Novellas which is coming out June 8, 2011. At that time, all three of the Boystown books will come out in paperback. I’m also planning to write a comedic ghost story as soon as my desk is clear.
How many novels do you have, that are currently published? Please list all the publishers, so the readers can locate you.
Boystown: Three Nick Nowak Mysteries – Torquere Press
Boystown 2: Three More Nick Nowak Mysteries – Torquere Press
The Perils of Praline, or the Amorous Adventures of a Southern Gentleman in Hollywood – MLR Press
Desert Run – Torquere Press
Where do you see your writing career in the next five to ten years?
It’s funny you should ask. My horoscope asked the same question this morning. Really, it did. In five years I’d like to be paying my bills with my royalties. All of my bills. In ten years I’d like to be doing just what I’m doing in five… mainly because it’s a really fun way to make a living.
Thanks so much for being here, Marshall – it was wonderful to have you! I wish you all the best in your endeavors. Today I’ve posted @ IRM and RLJ! Tomorrow erotic author Elise Hepner will be here, but until then have a great day everyone!
Happy Yaoi Hunting
Blak Rayne ^_^!!
Posted by Blak Rayne Books Blog at 10:00 PM