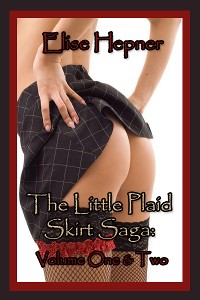 It's been a weird and busy week. Last night I posted three articles/three different blogs and I'm at it again this evening (not three thank goodness). I'm prepping for tomorrows post. I can't seem to keep up. I've been writing like a mad woman, trying to fulfill my other obligations, while running the funny farm I live in. I've got two kids, the cat, the business, the home, my hubby, friends and family that all need my undivided attention. Anyway, everyone has been pretty understanding that I need space and I'm in my groove. Once the author interview is up, it's back to the final edits of my next novel. Enough of my babbling! The blitz continues and today I'd like you to welcome erotic author, Elise Hepner!
Love the book cover, by the way. Who is, Elise Hepner? Tell us all about yourself.


ONE MORE RUB – Elise Hepner
Flynn has been cursed for over a century for a social slight he never committed. A voodoo priestess hexed him and forced him into a teapot where he could only be summoned by the rub of a woman’s palm. Once free, he grants these women three sexual favors—and cuts off his own emotions in the process. Unable to break free from an invisible cage of lust and sex to fall in love again, he’s resigned to being a sex object and nothing more.
Helena has been house sitting far, far away from her complicated past in England— including her former childhood sweetheart, who wasn’t satisfied when Helena didn’t want to be barefoot and pregnant. She’s resigned to leave behind the complications of men and sex. She hopes that logic will win out over her unreliable emotions—but she’s put to the test when she accidentally summons Flynn from his teapot prison.
Thanks so much for stopping by BRB, Elise - it was great to have you! I wish you all the best! Friday will be the last interview day for the blitz week - Stacy Kennedy will be here. She is the final contributor to the anthology - 'Kissed from Beyond'.
Then sweeties, I'm taking the weekend off for some much needed rejuvenation of the little grey cells. I will be posting on Monday as per my normal schedule, actually everything will go back to normal. LOL
Happy Yaoi Hunting!
Blak Rayne ^_^!!
Posted by Blak Rayne Books Blog at 12:14 AM