And Now 4 Something Completely Different!

All right, so I borrowed the title from Monty Python's Flying Circus - the little British comedy nut that I am. I don't know what you used to watch as a child growing up, but in my house it was the Britcoms. Every weekend, beginning on Friday night my father and I would sit down to watch British greats like Dave Allen at Large, Benny Hill, On The Buses, Doctor in The House and Monty Python. Can you imagine, here I am a little girl and I'm giggling it up to Benny Hill?? For those who know me, they should now understand where my wickedly dry, dark and sarcastic sense of humour came from. Good old Dad...LOL A personal fav is Fawlty Towers and some newer ones like Vicar of Dibley, Father Ted, Keeping Up Appearances, Thin Blue Line, Black Adder and Mr. Bean. Another huge fav of mine - Red Dwarf.

On Thursday nights it was murder mysteries with mom (KCTS) and that's probably why I read so many Agatha Christie novels growing up. I've watched everything from Hercule Perot to A Touch of Frost (love David Jason). Another past time in my family is the movie night. I'm quite the movie buff and I've got to say, I'd probably pick a really good action/adventure over a 'chick flick' (the hubby is into those)! LOL Serious. No joke. We'll go to the video rental store and here's me, hunting down the latest like a good Marvel or vampire movie, Underworld type stuff or even a decent thriller, and there's my hubby, reading the back of 'The Notebook'. So sad really! LOL 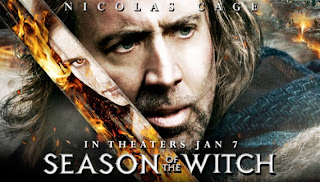 Anyway, last weekend my kids and I decided to catch a movie. We had three free passes and figured what the hell. Unfortunately Harry Potter was already gone and there wasn't much else to chose from. So we debated, watched the trailers and tried to pick something neutral that we'd each enjoy. My son voted for the Green Hornet - but I can't say that Seth Rogan does it for me. Not crazy about the guy. So we nixed that idea. Then my daughter suggested Tron but neither my son or I were into it (never cared for the first one). So after much humming and hawing we finally decided on 'Season of The Witch' starring Nicolas Cage. When it comes to Nick Cage, I can take him or leave him, it really depends on the role he's chosen and whether it suits him. I'm finicky with actors. He was good in Ghost Rider and The Sorcerers Apprentice - Con Air not so great.

As for Season of The Witch I had very mixed feelings about him and the movie. Here's a brief synopsis...
A pair of 14th-century knights (Cage & Perlman) are blackmailed into transporting a suspected witch to a monastery for trial, because it's believed her powers could be the source of the Black Plague. A monk and several others travel with the two men, lending aid and there is a strange string of occurrences during the journey.
I told you it would be short! LOL I'd classify this movie as a medieval thriller.  The special effects were decent. But the story had potential to be so much more. And the acting...well, not the greatest. It will spark interest and keep your attention for the most part, but other than that, I'm not sure if I'd add it to the collection. Normally I love movies with a paranormal, witch craft, medieval, demonic and/or other-worldly theme(s) but this one not so much. Like I said, it had potential and just as I felt myself hitting a climax I was dropped like a hot potato. My rating 5 out of 10.
So that's my post for this evening - thought I'd do something completely different and fun. ^_^!!
Reminder: Tomorrow (Jan 25-11) I'm posting @ RLJ Red Lipstick Journals! Don't miss out! There are some very cool articles and stories - make sure to take a look! I promise you won't be disappointed. Also I've added another twenty to thirty new Eye Candy pics! Oh yummy and they're so gorgeous - I'm positive you'll enjoy! **drools**
Until tomorrow Happy Yaoi Hunting!^_^!!
Blak Rayne
Posted by Blak Rayne Books Blog at 7:52 PM