(For those of you that don't know BL means Boy's Love)

I've developed another fetish...watching BL movies from Korea, China and Japan. Okay, I admit, I've always had a fascination with Japan and the Japanese culture, and over the years my fascination has grown to collecting anything Japanese. As everyone knows and as I've mentioned previously, I collect various items from anime/manga. And the last few years I've been getting into BL movies as well. These movies DO NOT revolve around sex or do they usually have nudity. I've viewed quite a few and I finally found one that has become a favourite, which I just purchased recently from Ebay. The title is Antique and it's based on the Japanese manga titled Antique Bakery. The movie was filmed and produced in Korea. So it does have subtitles available in English. I love good comedies with a decent story and Antique has it all! The two lead actors are gorgeous men!! (The cake shop owner and baker) **Drools**
Yes, as you can tell I also love Asian men...not sure how I ended up marrying a Scotsman first then Italian...The truth is I love men period! (That's a subject for another time lol) Getting back to Antique, I found the story to be very interesting and there was a touch of everything...humour, mystery and romance. I would recommend this movie to anyone who enjoys viewing this genre, yaoi or enjoys foreign films. The love interest is light and funny. I've added a picture of this movie at the end of this blog.
~ Here is a paragraph from Wikipedia on the movie.
Korean live-action movie
The Korean adaptation, Antique was released on November 13, 2008, and drew more than 1 million moviegoers within its first two weeks of release, making it one of the most successful Korean movies ever made.[7] Directed by Min Gyu Dong, the movie stars (amongst others) Joo Ji Hoon (Goong/Princess Hours and The Devil) as the owner Jin Hyuk and Kim Jae Wook (Coffee Prince) as the genius patissier Son Woo. The film was exhibited at the Berlin International Film Festival in February 2009.[8] The action in the film has been transposed to Korea and the characters given Korean names; otherwise, the script follows the main plot threads of the manga closely.
Cast[9]
▪       Joo Ji Hoon as Kim Jin Hyeok (Tachibana) **Drools**
▪       Kim Jae Wook as Min Seon Woo (Ono) **Drools**
▪       Yoo Ah In as Yang Ki Beom (Eiji)
▪       Choi Ji Ho as Nam Soo Yeong (Chikage)
▪       Andy Gillet as Jean-Baptise Evan
I better go before I soak my keyboard! That’s all for today!
Happy Yaoi Hunting!!
Blak Rayne ^_^!! 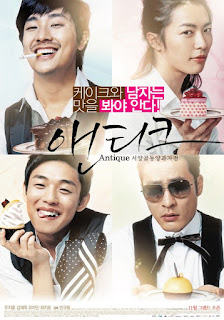