My reviews today are Nipple Bingo and My Love, both stories are posted on the internet but technically they aren't "webcomics", but rather mangas that are read online. I still can't decide whether I'm happy or not with this approach to selling books. Kobo does it, as does Kindle, et cetera. You buy a digital copy, but you can't actually download it; you have to read it with a specific app or on a specific device or the website where you purchased it. I prefer to download my own digital copy (PDF) from publishers/distributors such as Sublime manga or June. It may not be a paperback, but the digital file is mine forever.

Recently, I did a post on Tapas this time it's Renta!. Due to the fact that I have a large library on Renta!, I couldn't decide which titles to review at first. Finally, it came down to comedy and drama. 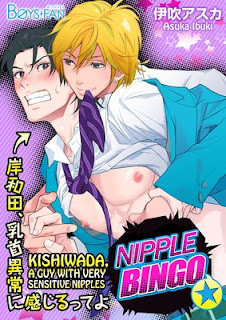 Nipple Bingo by Asuka Ibuki is the story of Kishiwada, a delinquent and his overly sensitive nipples. I know, funny right? Well, don't let the title fool you. This manga is actually pretty good. The art is excellent with attention paid to detail and the main characters, Kishiwada and his childhood friend Andoh, are simply a pair of hot, loveable delinquents (if you can call them that). Andoh is funny where Kishiwada tries to play the tough-guy. However, when anyone touches his nipples he turns to mush. When these two were kids they used to play a game Andoh called "nipple bingo", which he thought was hilarious until he discovered Kishiwada had very sensitive nipples which caused Andoh to fall for his friend. Andoh believed he had a problem and scared of his feelings, he ignored Kishiwada then he moved away. Kishiwada burst into tears devastated by the loss.
Years later as teens they are reunited. Andoh is madly in love and chases Kishi in his own way. Kishi feels the same but refuses to give in to Andoh, who he believes has become a man whore. The best parts of this manga are the art and humour; every page is eye-catching and Andoh's expressive face and cheeky one-liners provide the perfect balance to Kishi's shy sexiness and tough-guy act.
This series isn't finished yet, so I'm curious to see if these two will stick it out and if Kishi will get the surgery he claims to want. Sorry, but you'll have to read the manga if you want to know more. 5 Stars! 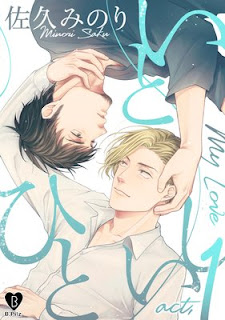 My Love by Minori Saku is touching, at times sad but also uplifting, as Homare, a purchaser of family products and a man who loves children, is constantly ridiculed and hurt for being gay. Homare meets Junpei in a restaurant after work. Junpei is drunk but just his "type", and he hits on the man. Junpei politely turns him down, but that doesn't thwart Homare's advances. And after Junpei leaves the restaurant Homare attacks him before helping him home, where he meets Junpei's daughter. Shocked then guilt-ridden he puts Junpei to bed and leaves with haste. From that night on the men slowly become acquainted and eventually fall for one another. But it's Homare that seems to have difficulty accepting a healthy relationship. He isn't used to being with a good man or having his own family. He's been hurt and alone for so long, he's scared and resists in the beginning. But Junpei is patient and loving.
My Love is an excellent story so far, not to mention it's realistic. Junpei is one of the most caring, patient and docile semes I've ever come across. Honestly, you can't help but love both these men and appreciate the hardships they're trying to overcome. I can't wait to see where the story leads.