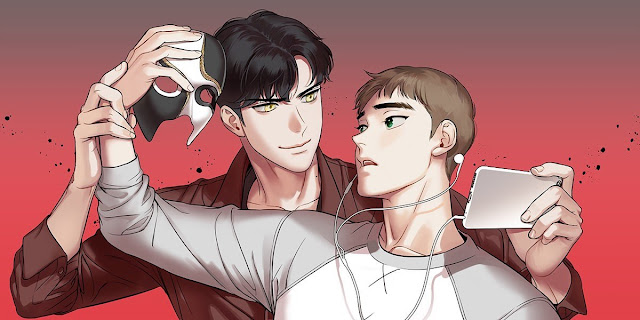 As I stated in a previous post, I have accounts with three online webcomics: Renta!, Lezhin and Tapas. Last time, my reviews were of two stories on Tapas: Eyes On Me and Honey Catch. Today, my choice is Lezhin. I’ve read quite a few on this site: At the End of the Road, See You at the Crosswalk and Stop at the Red Light, A Guy Like You and I also gave Killing Stalking a try, plus a few others. One of my personal favourites was Out of Control. But, lately, I’ve really got into BJ Alex by Mingwa. 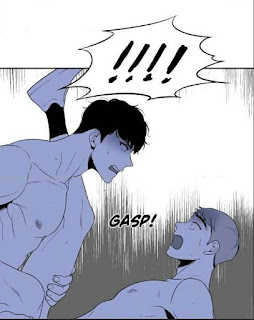 Every night, college student Dong-gyun watches a live stream of a boy show hosted by broadcast jockey Alex. Dong-gyun is timid and smart and not only does he admire Alex for his ripped body but also the broadcast jockey’s frankness, how he openly shares his sexual experiences with the audience. Always a bit anxious around his peers, Dong-gyun gets drunk at a school networking event to calm his nerves but eventually passes out. When he wakes, he’s in bed with a shirtless hunk. And the hunk’s appearance is very similar to Alex.
At first, I thought BJ Alex is the typical “seme takes advantage of the drunk uke” story because it seemed to head in that direction. But that isn’t the case.

As I continued to read, the truth came as a pleasant surprise. Dong-gyun maybe timid and at times introverted but he isn’t a pushover, and he’s nobody’s fool. And he’s the one who takes advantage of the situation—blackmailing Alex, even though that isn’t his intention. Of course, later the tables turn when Alex realizes he needs Dong-gyun and blackmails him. This dynamic adds a refreshing twist, how these men go back and forth and drive each other emotionally crazy. However, throughout the story, it is painfully clear that Dong-gyun’s overwhelming feelings for Alex drive him to make certain decisions and, not always the correct one.

As for the “arrogant—chip on my shoulder—who gives a shit” seme Alex, it seems he has personal baggage that he can’t let go. But, I don’t think that’s an accurate analyze of what’s going on with him. I get the feeling, from the author (and this is just speculative) that perhaps Dong-gyun is forcing him to re-evaluate his past and present life. Initially, I didn’t care for Alex. He comes across as a hard-nosed, blunt and rude man, but now I understand why and I’ve come to appreciate him, flaws and all.