From the darkest skies to the deepest seas, dive into a breathtaking collision of mermaids, dragons, sirens, and more in SIRENS & SCALES, a unique Urban Fantasy and Paranormal Romance Collection! 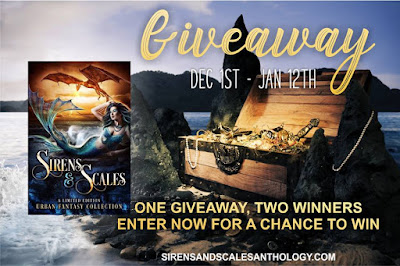 Your travels through these stories of dazzling ocean tides and the dizzying reaches of the heavens will leave you breathless. Join dragon shifters and mer-creatures for an experience of salty seafaring adventures and magnificent airborne enterprises where sky meets sea, love meets its match, and imagination has no end.

With 26 full-length stories of enchanting fiction, you’ll learn the secrets of Atlantis, soar to uncharted peaks, and discover creatures of wing and fin and those who love them.

Ready to set sail and catch the tide before your chance for adventure is lost forever? Then order this collection of BRAND NEW and EXCLUSIVE material from your favorite USA Today and award-winning authors before it’s gone for good!

A Clash of Fire by Natalie G. Owens and Zee Monodee
Take a family rivalry like Romeo & Juliet’s …
Add a liberal sprinkle of conflict à la Pride & Prejudice …
Breathe in some life & fire …

By Water's Edge by Kelly Anne Blount
Kidnapped from the sea by a fierce dragon, Aria must help her fellow mermaids escape before it’s too late.

Caught in the Current by Pauline Creedon
Mermaids can be cruel creatures. Bailey has always known and kept his head down to go with the flow. Today he’s not.

Dragon Wings by Konstanz Silverbow
The world against dragons. One girl against the world.

Dragonmount by Jennifer M. Eaton
Things can’t get any worse than being snatched by a dragon, until Anna is dropped into a bloodthirsty battle for the Draconic crown.

Frozen Ashes and Smoldering Shards by Midnight Voss and Ivy Quinn
Save the eggs, save the world.

Kiss of Frost by Graceley Knox
Fighting to save a family of dragons from evil mages? Easy.

Landlocked by C.S. Moore
If asked, Mari would have guessed that the most powerful force on the planet was a nuclear bomb. She was about to discover that the top spot was actually held by two things, love, and blood…

Mermaid Adrift by Jennifer Laslie
When disaster strikes, Meriya must decide whether to stay on land or return to the sea.

Moonstone Prophecy by Carly Fall
When an astrological event opens up the seams of the universe, paranormal entities swarm the town of Saint’s Grove, some for noble reasons, others with evil intent.

Of Blood and Ashes by Kyoko M
What would you do if you had a hunt a giant killer dragon in the haunted woods of The Suicide Forest?

Once Bitten by Tina Glasneck
Death by accident, vampire by design

Paradise of Shadows and Devotion by Gaja J. Kos
Hunted for her present. Haunted by her past.

Pillars of the Deep by Harper Alexander
The tide has come in. And it’s come to collect. 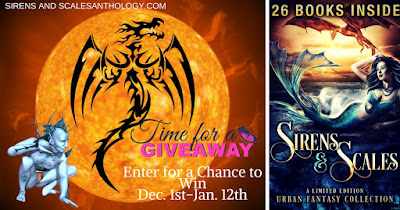 Returning by A.L. Knorr
Mira is a mermaid on a mission.

Sirena by Mindy Ruiz
Evil is in the Heart of the Ocean.

Stolen by the Sea Lord by Starla Night
Their love is forbidden. But only she can save his race.

Stones of Dracontias by N.D. Jones
A life without love, forbidden or not, is a life unlived…

The Lady Prefers Dragons by Katalina Leon
Wish Stones book 2
Doesn’t every girl dream of having two protective dragons of her own?

The Mermaid's Escape by Kellie McAllen
Four shipwrecked divers, one mermaid princess who longs for the freedom to choose – or not.

The Mermaid’s Puppet by Cate Farren
Mermaids versus dragons.

The Pirate’s Siren by Bethany Wicker
She belongs to two races—and both of them want her dead.

Waves and Secrets by B. Kristin McMichael
Wanting out of the Merworld is impossible, but that doesn’t stop two friends from trying. 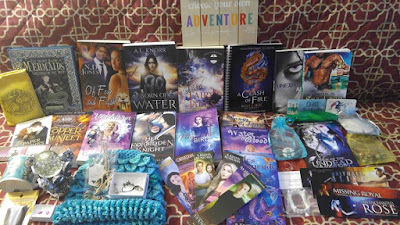