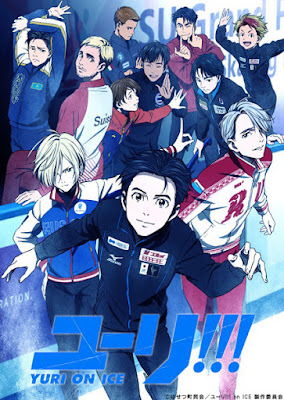 As promised, I’ve written my post about the new anime Yuri on Ice, which has become crazy popular, but with good reason.

* Wikipedia: Yuri!!! on Ice (ユーリ!!! on ICE?) is a Japanese sports anime television series about figure skating. The anime is produced by MAPPA, directed by Sayo Yamamoto and written by Mitsurō Kubo, with character designs by Tadashi Hiramatsu, music by Taro Umebayashi and Taku Matsushiba, and figure skating choreography by Kenji Miyamoto. It first premiered on October 5, 2016.

As everyone’s well aware, there is a Wiki page for damned near everything on the planet, so here is the one called link: Yuri on Ice Wiki

And here is the link to the actual website: http://yurionice.com/en/ 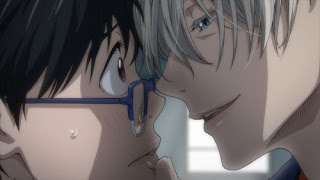 Actually, there are several good reasons why this anime is so popular. The animation is fabulous—beautifully executed—colourful and realistic. The second is the music. Being a pianist and music lover, I find the soundtrack very uplifting. In fact, the characters, even though they suffer ups and downs, are also inspirational in their own right.

Yuri on Ice has a simple plot—Yuri Katsuki is a Japanese figure skater that suffers defeat at the Grand Prix Finale ice skating competition due to a lack of self-confidence. While at the competition, he runs into the one skater he has always admired and loved, Russian champion Viktor Nikiforov. Embarrassed, he can’t face Viktor and returns home to Kyushu, where he contemplates retirement.  One night he copies Viktor’s routine at the local ice rink. His friend’s daughters capture the whole performance on their iPhone and post it to the Internet. Without Yuri’s knowledge his performance goes viral, and the next day Viktor’s on his doorstep with an offer to coach him. Then a short while later a young Russian skater Yuri Plisetsky shows up to challenge Yuri to an unprecedented Grand Prix series.
Adding to the athletic aspect, the romantic thread between Yuri and Viktor helps to strengthen their emotional attachment to the sport as well as each other.
There are countless anime that have suffered botched plots, underdeveloped characters and, in many cases, a bad ending. You know the type I mean. That moment when you stare at screen and say: "WTF was that!?" And it's thanks in part to the studios rushing to get the product out before the mangas series are even complete. But, hopefully, it won’t happen in this case.


With endearing characters, great music, a hint of romance, humour and a simple but perfectly executed plot, I think Yuri on Ice will remain a huge favourite well into the future. I can't wait to see how the series ends! Five stars! 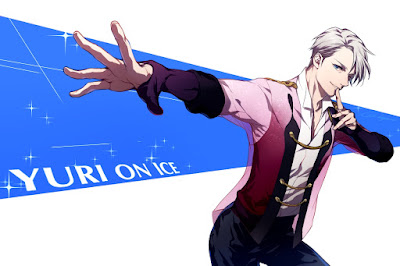