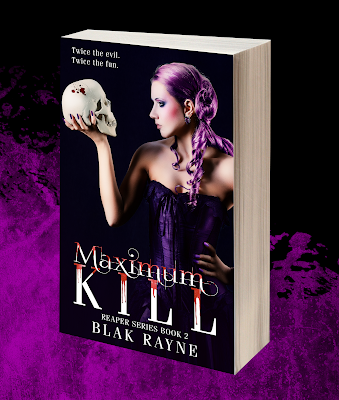 BCB:
After most of the government officials involved in the Snuff program are eliminated, Brody and Z take up residence in a deserted village south of Peardonville. Beisicker seems the perfect refuge nestled in a snow-covered valley, quiet and far from prying eyes. However, their time together is brief.
Z is kidnapped, and Brody is forced to meet his first significant challenge, a fellow serial killer. The pharmaceutical giant End Life wants its best asset to return, and it will stop at nothing to make it happen.

As far back as he could recall, he’d had the ability to shut out the world, to see only what he wanted to see, to pick and choose. And when he chose to kill, he enacted the murder in his head, planning for inconsistencies, unforeseen problems, or possible errors in his judgment. Once satisfied that he’d accounted for all variables, he executed with precision timing.
His gaze shifted, instantly drawn to shouting outside of a Laundromat; a couple was in the middle of a heated argument. Observant as ever, he calmly took note and sauntered past. The woman said she’d had enough of the man’s cheating. She said they were through, and he backhanded her, sending her sprawling across the ground along with a basket of neatly folded clothes. She wept, holding her mouth as the man yelled above her, berating and threatening. Not one passerby took notice of the couple’s abusive tête-à-tête. It never ceased to surprise him how emotionally detached the average person could be.
He blinked slowly, allowing the external stimuli to flow: young male, athletic build, thirties, with a chip on his shoulder, buildings on either side, six vehicles, multiple escape routes, only one practical, weather perfect to mask noise and decrease the possibility of identification. He proceeded past the front of the Laundromat and disappeared in an alley. As he walked, he knotted his plastic bag of items and tossed it away behind a dumpster. Reaching inside his jacket, he curled his fingers around the grip of his favorite piece. He exited onto a back street and into blowing snow, a blizzard that somehow encapsulated the immediate area in a dead calm. The man was beating the woman next to a cream SUV. Propped against the front quarter panel, bleeding, the woman put her arms up in defense as the man kneed her.
She looked at Brody then, tears streaming down her bloated face. He read the fear in her watery eyes, eyes that were pleading in desperation. The pain reminded him of Zeus.
Exhaling white, he grimaced and took aim. “I despise cowards.”
At the sound of Brody’s voice, the man spun around. “Who the hell are you?”
“The Reaper.” He squeezed the trigger. The firing pin clicked. And a bullet drilled a hole into the man’s chest, snapping his torso back and throwing him onto the icy pavement.
Brody took a moment to soak in the beauty of his handiwork, blood pooling on a stark canvas of the purest white. He loomed above his choking victim like a vulture over a carcass, his mind racing, hundreds of frames of contemplation per second—a gruesome mishmash of those he’d killed and those he’d saved—the rush filling his soul with blinding rage, lust, and near-transcendent gratification. The man beseeched for his life. But those quick to seek mercy after committing a heinous act only fueled his need to cleanse. Crouching, he grabbed the guy by the scruff of his jacket and shot him in the forehead.
“Thank you,” the woman murmured, peace easing her disfigured face, and she cracked a lopsided smile.
Holstering the M9, he retraced his steps to the alley, where he retrieved the white plastic bag and headed back to the main road. Five blocks later, he heard sirens wail in the distance.