I've been extremely busy as of late. I have spent every spare moment working on paperwork. I run an office, and part of that is doing the books, which means this is the worst time of year for me. So, I apologize for not posting very regular. But the last month was just bad. Anyway, I'm back on track. And to start this week I've got a book review to share. As I've stated before I will read just about anything, and I'm glad this time I chose Pretty Wicked. 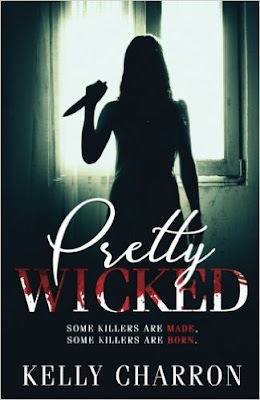 The daughter of a local police detective, fifteen-year-old Ryann has spent most of her life studying how to pull off the most gruesome murders her small Colorado town has ever seen. But killing is only part of it. Ryann enjoys being the reason the cops are frenzied. The one who makes the neighbors lock their doors and windows on a hot summer’s day. The one everyone fears but no one suspects. Carving out her own murderous legacy proves harder than she predicted. Mistakes start adding up. And with the police getting closer, and her own father becoming suspicious, Ryann has to prove once and for all that she’s smarter than anyone else—or she’ll pay the ultimate price. *warning – some graphic content Pretty Wicked is a mature YA novel intended for ages 16 and up.

Pretty Wicked by Kelly Charron is an intense psychological read, where the killer takes the reader on an emotionally charged ride. Young, bright, and downright evil, Ryann enjoys giving the police a run for their money and anyone else who dares to try and stop her on her maniacal quest. What is it like to be a serial killer? I have no idea. I can only hazard a guess. Logic tells me it’s a dark, lonely place, as most killers seem to always want that one thing, at least in their mind, they can never have. And the author did a superb job of illustrating this fact. Ryann is merciless, and there is certainly “method in her madness,” the reason she feels a need to prove herself. The book is fast paced and well written; an utterly enthralling read from start to finish. And, for me personally, the ending is the best part. I can’t say I loved Ryann; she brought my worst fears to the surface. But I did come to appreciate her tenacity. When an author can elicit that strong of an emotional response, it speaks volumes for his or her skill as a writer, and Ms Charron did a fantastic job. Five stars!