Welcome to BRB, everyone! It's been a few months since I've posted a new title, but here’s the next on my list. Enjoy!

I'm not a huge fan of "the love triangle," but if the three main characters are well-developed, and the plot is put together right, the story can turn out to be an emotional blockbuster. And both of the yaoi in this review definitely reach that level. 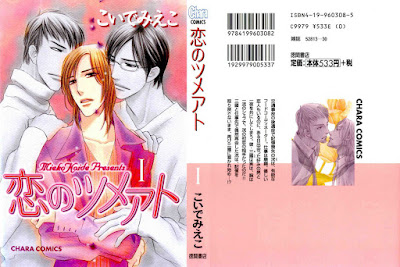 Koi No Tsumeato or Scratch Marks of Love by mangaka Koide Mieko is a dramatic romance about Kou and his lover of many years, Ao, and a man from Kou's past, Mikuni, who threatens to destroy their relationship. Kou was involved in a serious accident while attending college, and due to head trauma, he's forgotten sections of his past. His roommate at the time, Ao, supported him during his physical recovery and helped him piece together his fragmented memories. Of course, in time, they became lovers. Approximately ten years later, Kou's out one night for work and meets a man by the name of Mikuni. Kou was drunk, Mikuni mistook him for someone else, hit on him, and they had sex. After that, the story began to unravel. Kou was a philandering fool; Ao struggled internally with his emotions, and Mikuni's an aggressive jerk who would stop at nothing to get Kou.
I give this manga five stars for one reason only; it is one of the most twisted, upsetting love triangles I've ever read, which means it got a major emotional response from me. My chest felt like it was in a vice, as I anxiously read from page to page. I give the mangaka kudos that she almost drove me insane by the end.
Not my favourite cast of characters, although Kou and Ao, grew on me. Mikuni was a douche; sorry, but how could anyone accidentally return after that long and expect to rekindle an old flame, when the flame evidently doesn't exist anymore. As for Kou, I was thoroughly disappointed with his shitty attitude towards the man he has supposedly loved and been with for years. It was his flightiness and adolescent stupidity that contributed to the shit storm, even though I understand why he acted out. I get it; he was confused. But come on... Seriously?
The character that I felt sympathy for, but he also frustrated me the most was Ao. He drove me crazy until he grew a set of balls and admitted his fault in the situation. But, I have to add, Ao was the most mature; yes, he made a mistake when he lied, but he didn't cheat, and gave Kou everything he possibly could. However, having said all that (bitch, bitch), I was very pleased with the outcome. 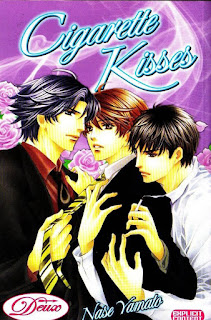 Cigarette Kisses or Kuchibiru no Yukue by Yamato Nase is another love triangle based on childhood friendships. Yusuke has been in love with Soji since junior high, but he's never said anything. After they graduate, Soji suddenly marries, and in time Yusuke makes certain to distance himself. Years later, Yusuke runs into Soji in the company smoking room; incidentally, they work for the same firm. Of course, Yusuke is upset and finds it difficult to separate work from his personal feelings in part because he's still in love with Soji. Soji feels the same but he is trapped in a bad marriage, and since his family owns the company, he's under pressure to keep up appearances and do as he's told. Then Soji's kouhai Masahito, their childhood friend, takes a job at the company; so enters the third wheel. And you guessed it; Masahito has his agenda.
In the case of Cigarette Kisses, I felt an immediate emotional attachment to the uke, Yusuke, more so than I did with Kou (Koi No Tsumeato). At least Yusuke had some class (he wasn't a man whore). As for Soji and Masahito, it was a toss up in the end. Yusuke could've picked either, and I would've been satisfied.

Cigarette Kisses evoked feelings of deep sadness as I read, while Koi No Tsumeato made me anxious. Anyway, I give both five stars!