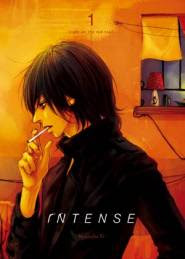 Kyungha Yi’s Intense is a dark, dramatic romance that shows the grim reality of gang life and, what happens when a pair of young men with nothing to lose, triumph over their greatest fears. This four-book, Boy’s Love set is beautifully drawn with exquisite characters that have a heart-breaking story to tell. 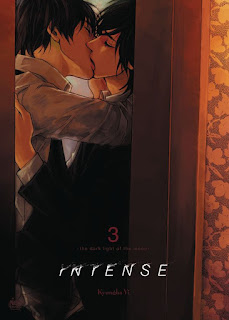 Jiwoon’s father commits suicide over a massive debt, leaving Jiwoon in the hands of the mafia. Raised in an abusive and unforgiving environment, he rarely speaks and does what he’s told to do. But when his boss ends up in jail, he’s banished to live in the red light district, where he meets a mute Soohan—a strange, young man who keeps to himself. Jiwoon is immediately taken with Soohan; he’s attractive with a gentle nature. And he can’t stop staring at Soohan’s amazing eyes. Eventually, they strike up a rapport that turns intimate. But only a short time into their relationship Jiwoon’s boss gets out of jail, and the pair is forced apart. In desperation, Soohan follows his lover into the lion's den.

The mafia banishes Jiwoon Kang to live in a secluded red light district among struggling prostitutes, dirty street thugs, and shady drug dealers. He's a quiet man with deadly talents with a knife. The local thugs quickly learn to hate him. To maintain peace, a brothel manager sends Jiwoon to live with a strange local man Soohan. Soohan is a mute. He only wishes to be left alone and help prostitutes in need. The street thugs hate him, too. Both men carry deadly, dark, and traumatic secrets in their past. They may find that their only solace and protection...lies in each other. 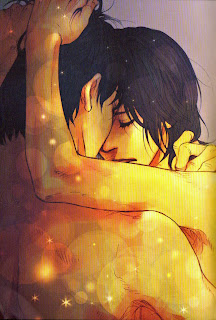 I’ve read countless manga from every genre. And, I can honestly say, that out of all those titles only a precious few are actually worth mentioning. Intense is an intense narrative that stirred my emotions. One minute my heart sank and the next I was on the verge of tears. I love a story that can keep me reeling until the end. Fantastic! This manga is definitely a five-star read!