Born under the zodiacal sign Sagittarius in Iwate Prefecture, Japan, Minase Masara is a well-known and well-loved mangaka that has her own distinctive art style. With tall, slender characters that have expressive eyes and her ability to create simple but engaging plots, I can’t help but constantly seek out her work. It was really difficult to pick one manga since she’s created some forty-odd titles, so I chose three that I have read time and time again. 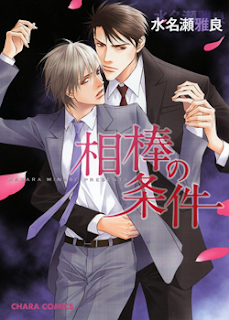 The first title is Aibou no Jouken. Yuzuru and Daisuke were close during high school but something changed their relationship, and Yuzuru left without a word only to bump into Daisuke years later at his company. The pair share an unsettled past, and Yuzuru has moved on, but a married Daisuke can’t seem to let go. And Yuzuru can’t help but wonder if their meeting is fate or if his old friend has shown up on purpose. I’m not a huge fan of sports based stories but because Aibou no Jouken carefully incorporates the baseball giving equivalent time to the men, I enjoyed it immensely. Both characters are equally as strong, no whiny uke here, and it’s always nice to read about a healthy gay relationship. 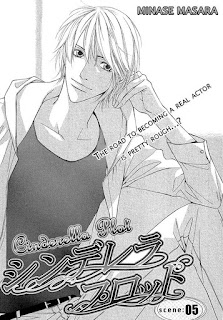 The second title is Cinderella Plot. Ao Sakabara is a young actor who appreciates and credits his success to his fans. When he gets a huge career-boosting role in a drama written by his favorite screenwriter, he’s more than thrilled. Especially, since one of his co-actors Kousuke Wakatabe is famous. But an unexpected part of his past shows up, which has the potential to either ruin him or make him happier than he’s ever been. This on-going romantic drama is longer but no less enjoyable. Ao is a great character—full of life, naturally kind and forthright. Kou Higashihara (Ryota Azuma: real name) is also a wonderful character in his own right even though he acts like a demanding ass in the beginning, the proverbial overly sensitive genius. The art is superb as always. 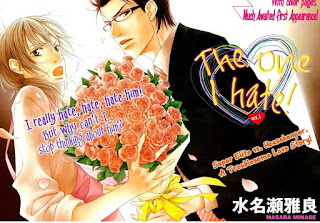 The third title is Daikirai Na Aitsu or The One I Hate is a shorter yaoi that packs a lot of punch with its strong, endearing characters and simple yet pleasing story. Chihiro is an out-of-work theatre actor who takes a job as a housekeeper for a wealthy businessman. The hours are flexible and the pay is decent, so he can’t say no to his uncle’s offer. Eventually, he cooks for Yuto too. But even still Yuto remains a sarcastic, rude, and stuck-up asshole who constantly belittles Chihiro. It seems pretty improbable that these two men would fall for one another, however, they do. Daikirai Na Aitsu is really a sweet story. It’s interesting and funny how Yuto finally changes his tune and wins over Chihiro.