Kiss the Reaper
The Reviews!

5 stars - I suggest and highly recommend you read Blak Rayne’s new inspiring book
By Michael T Jordan on June 12, 2016
Format: Kindle Edition
If anyone wants a fast paced read that will keep you involved with the plot, the imagery and language so much you cannot put the book down until you read the last word, I suggest and highly recommend you read Blak Rayne’s new inspiring book, Kiss the Reaper. If you have ever lived under the dark side of life or have tendencies that way, like I did when I was young, you don’t want to miss out on Z’s infatuation with Brody. The author takes you on a rollercoaster ride of distinct imagery action so real to life you will think you know these characters personally. The author intertwines the dignity of life, no matter how deplorable a person lives, with the acceptance of death or murder for people deserving of that end. I felt a kinship for Z as the main character written from first person perspective. You will be swallowed emotionally in his love for Brody, the cold, aloof, dark character. Together from different worlds ruled by gangs and the government their relationship evolves into a passionate romance that will restore your faith in mankind. I would give this story a higher rating than 5-Stars if there were a higher value. But I will give Kiss the Reaper a solid 5-Stars, enthusiastically.

5 stars - Dark Hope
By T. Meerschaert on June 7, 2016
Format: Kindle Edition
I was gifted a copy of this story in return for an honest review. The story is well-crafted and kept me engaged. I could not put it down until I finished the whole thing. It's a dark story of a young male prostitute who has a client like no other, and he eventually finds out why. I would recommend this book to lovers of dark erotica and M/M erotica. While the story is dark, there is an air of hope to it also. It was my first encounter with Blak Rayne, and sure not to be my last!

5 stars - You Won't Breathe Until the End ~ It is THAT Gripping
By Clarissa McGinnison May 23, 2016
Format: Kindle Edition|Verified Purchase
I have long been an avid fan of Blak Rayne. Her work is unbelievably phenomenal and always draws us into the world between her artful pages, submerging us in carefully selected words crafting a world none of us could even imagine. And yet she can. In Kiss the Reaper, she has written a very dark yet hopeful world of retribution, redemption, love and hope. How the Hell are all those contrasts even possible in one piece?! I don't know; you'd have to ask her. But, she does it and like an artist with a bare canvas, oils and brushes, she transforms her images into fast-paced words that are so moving, they latch onto us by our fears and curiosity and don't let go until the last page is turned and we sigh...wanting more..
The story is compelling, gripping, dark...and yet not, The words are strung together like jewels: carefully, artistically, one enhancing the other and in need of the other’s brilliance. Her way with words is, I don’t really know…magical? I saw everything she described and felt the tension, the relief, the resignation, the determination—the love and hope--the pain. I felt the rain pelting, felt the concrete sidewalk rise up to meet the face of a falling Z, I heard the approaching footsteps while my own terror mounted. Brody's calm determination was a frozen wave that washed over me. I didn't breathe for 5 chapters so I couldn't put it down. I had to find out how it ended so I could breathe again.
If you don't read this book, you will do yourself a tantalizing disservice on this emotional roller coaster that is her imagination. This book will bring you to the core of the dark side of human nature. But, there is promise in retribution; there is hope in redemption. In short? I friggin' loved this book and cannot wait for the next one. 5 stars plus!

5 stars - Dark and Deep
By Jordan Stringfellow on May 22, 2016
Format: Kindle Edition
This dark, suspenseful crossover defies single genre classifications. The multi-talented Blak Rayne brings us a novel with the emotional depth of a romance, yet the relationship between Z and Brody surpasses everything remotely expected of the romance genre. Grasping for relief and an escape from a life he can no longer endure, Z becomes enthralled by the dark and intelligent, albeit mysterious Brody.
It is Brody's mysterious quality that draws Z into a world he never imagined - even darker than his own. Filled with tension, thrills, twists, and smart dialogue, Rayne has made me a fan for life. Initially drawn by the cover, I was pleasantly surprised to find the story even more exciting. I could not put this one down for wanting to find out what would happen next - what Z would find, what Brody would do to him for infiltrating his world, encroaching on his dangerous secrets.


If you enjoy a mix of thrills, suspense, mystery, and a deep, yet unusual relationships, you will love "Kiss The Reaper." Exceptionally well-written with well-developed, multi-dimensional characters, this is a dark tale you won't want to miss. Five stars.

New release now available at Amazon!
As a prostitute, Z has no one trustworthy he can rely on in his life until he meets Brody, a kind and mysterious man who seems to be the answer to all his problems. 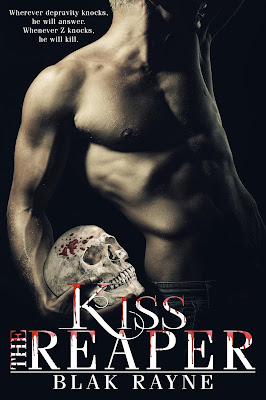 Purchase Links:
Kiss the Reaper is available at these distributors.