Got to Have a Mystery #mystery #series #thriller #fiction

Years ago, I collected and read all of Agatha Christie’s books because I love a good old-fashioned murder mystery. Sherlock Holmes is another, Brother Cadfael, and many more. I could probably name twenty programs and another twenty mystery authors off the top of my head. I’ve seen so many throughout my life they’re engrained in my brain. And I’ve also read manga mysteries and watched the corresponding animes.

One of the best anime mystery series I’ve viewed to date is Erased or Boku Dake Ga Inai Machi, a fantasy thriller seinen manga series written and illustrated by Kei Sanbe. Seriously, for a cartoon, this story is unbelievably well done and kept my attention straight to the end. The first episode may seem a little confusing at first, but once you watch the second and come to understand what is happening to the main character Satoru Fujinuma, a young manga artist, trust me, you’ll be enthralled.
BCB:
Satoru Fujinuma is a young manga artist struggling to make a name for himself following his debut. But, that was not the only thing in his life that Satoru was feeling frustrated about…he was also living with a strange condition only he was able to experience. - REVIVAL A strange phenomenon where one is transferred back to the moment right before something life-threatening occurs. This continues to happen until the cause of the threat is erased. It is as if somebody is forcing Satoru to stop it from happening.
Satoru is an intelligent kind man who can act a little awkward at times. But he’s also the type of character you can’t help rooting for. Due to this “revival” condition he loses everything over and over and has to continually fight to put his personal history and that of his friends and family back together again. When he was a child a female classmate was brutally murdered along with two others. Thus the time jumping comes into play. He’s convinced a string of bad events from the past has ruined his life. If he can go back and solve the crime before it’s too late, he believes the bad situation in his present life might be erased. Honestly, what an amazing story. 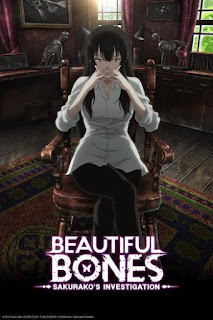 Another interesting, however, less intense series is Beautiful Bones. This one has more of an Agatha Christie feel to it just with a modern setting. Sakurako Kujo is a genius and crazy about bones. Shotaro Tatewaki is a high school student who befriends the recluse and they wind up solving mysteries together that revolve around bones.
BCB:
The story centers on high school student Shotaro Tatewaki and the beautiful Sakurako Kujo, who loves beautiful bones. Due to the nature of her interests, the two of them are involved in all kinds of incidents involving bones. 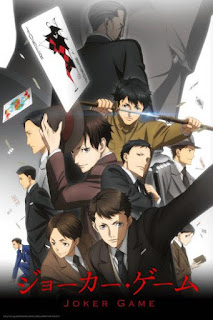 The last series I want to mention is Joker Game, which is about a secret Japanese spy organization established during WWII. This anime has a totally different concept. I’m not huge into espionage, but I like the way a mystery has been woven into each episode. I’m still watching this series, but so far I’ve found it quite good.
BCB:


In autumn of 1937, as the coals of World War II are beginning to smolder, Lt. Col. Yuuki of the Imperial Army secretly establishes a spy training organization called the "D Agency." Those chosen as members of the agency, in opposition to the national trend toward reverence of native-born soldiers in the army, are civilian university graduates who pass the superhuman selection test with flying colors. Under the resourceful Lieutenant Colonel Yuuki, they learn not only how to work with gunpowder, wireless communications, vehicles, and airplanes, but also various skills essential for spies...