Gangs Fueds, Back Stabbing and Sex - What Could Be Better? #yaoi #bookreview #youkanitta #yakuza 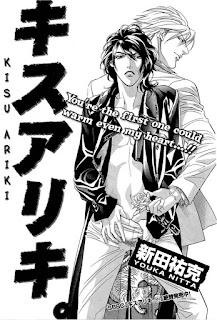 Starting With A Kiss - Yaoi Review

Starting With a Kiss (Kiss Ariki), story and art by Youka Nitta. Other manga by the same author that I've thoroughly enjoyed are Haru wo Daiteita (Embracing Love) and The Prime Minister's Secret Diplomacy. Known for her sexy, black-haired characters and plots that are almost always yakuza based, I can't resist sneaking a peek at her website at least once a month to see what's new.
When a gang feud erupts, the son of a yakuza boss, Tohru, is exiled on a deserted island to keep him out of harms way. Tohru is hotheaded by nature and angry when he can't join the fight, and is forced to spend his time with Mutsumi, the son of the gang's second in command.
Mutsumi and Tohru are about as opposite in personality as anyone can be. Mutsumi is serious about college and where his life will lead. Tohru, on the other hand, comes across as a very angry and confused man. He doesn't seem the type who will eventually take over his father's position as the head of the family business. But, regardless of the personality clash, the longer the men spend time together on their private island, the more it seems Mutsumi has feelings for Tohru, and he's willing to take his place in the ranks provided Tohru will become his lover and blood brother.
As with most of Ms. Nitta's manga there's a twist to Starting With a Kiss, the sex was frequent and deliciously smutty, and the art visually stunning, but, and this is a small but, I found the dialogue between characters choppy at times. This isn't to say that the whole 'lost in translation' thing posed a huge problem; though I did reread certain sections to make sure I understood the events clearly. 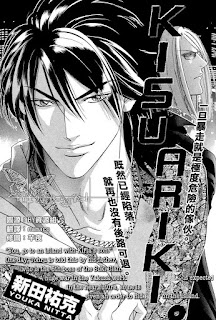 The Sexy Dads
And, I have another confession to make. Even though Mutsumi and Tohru were beautiful characters I thought their fathers, in their youth, were sexier. I know it sounds strange, and I usually never mention the side or back-story characters, but in this case I'd love it if Ms. Nitta dedicated a manga just to them. *drools*
So, here's my rating, five stars. The characters were gorgeous, the sex, hot, and the story interesting. I can't wait for volume four!