24. The Student Teacher Syndrome
Anyone’s who is into yaoi has read it at least once. And you know exactly what I’m referring to—the student teacher relationship—the forbidden fruit and an allegedly twisted Japanese fetish. The host of this Youtube channel said some men in Japan have a seriously deviant fetish for schoolgirls, especially when in uniform. So that’s probably why the whole high school setting seems to be so damned popular in manga/anime regardless of the genre. Whatever the reason, I can honestly say, it’s overused, and after a while, unfortunately, most the stories seem to read the same.
Anyway, as I mentioned previous Kazuma Kodaka’s Bad Teacher Equation is my favourite yaoi and Sensei wa Ore no Mono or Teacher Belongs to Me, story by Mie and art by Chika, is my favourite straight romance with this trope. But since then I’ve come across more teacher/student yaois I wanted to share. So here goes! 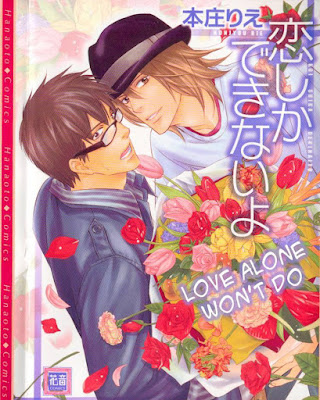 BCB: Highschool Teacher Umehara-sensei has been transferred from an all-boys to a girls high school when he meets his former pupil now university student Hataoka Kei. They start meeting each other to drink together. Umehara-sensei feels a bit weird to drink with his former pupil. But how much weirder would he feel if he could know that Kei has an obsessive love for him to the point where he starts to take up stalking habits.
This is a heartwarming story about an awkwardly clueless teacher Umehara who seriously can’t see the forest for the trees, and inadvertently takes lessons about his love life from his female students. Over all this is a great story and, of course, it has the usual elements—decent sex scenes, good art, simple plot and endearing characters. 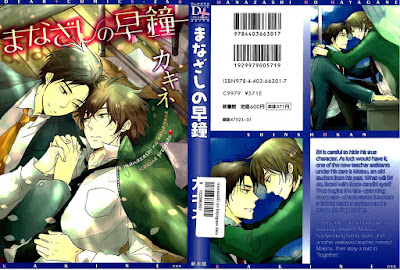 Manazashi no Hayagane or Touch Me Teacher, story and art by Kakine.
BCB: Eri is careful to hide his true character. As luck would have it, one of the new teacher assistants under his care is Motou, an old student from his past. What will Eri do, faced with those candid eyes? Thus begins the tale - spanning over years - of a romance between a faithful teacher assistant and a masquerading teacher.
In the same cram school, love is budding between Motou's hardworking friend, Izumi, and another awkward teacher named Makino. Their story is told in "Together".


This is another really good story about the past catching up with the present. Teacher Eri said to a former student Motou, “Stay true to yourself.” And then Motou returns seven years later as student teacher determined to follow Eri, the teacher he fell in love with. Both men suffered from sexual discrimination during their youth and eventually find happiness in each other. 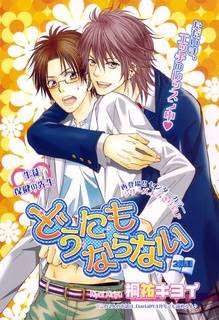 Dou-imo Nara Nai or It Can’t Be Helped, story and art by Kiriyu Kiyoi.
BCB: Yosemine Takumi is a difficult student to handle. He’s used to get what he wants by using his family's strength in school. The new Infirmary Nurse, Tsutsui, is determined to change all that. He's not going to let himself be bullied by Yosemine, or anyone else, after all these years. But Yosemine has fallen head-over-heels in love with Tsutsui-sensei and set the goal on owning the nurse for himself!
It Can’t Be Helped is a stereotypical teacher/student yaoi where Yosemine relentlessly chases after the school infirmary nurse Tsutsui, and bullies the man until he gets his own way. But, when I say bully, I mean in a real mild sense of the word. Yosemine will do anything for the school nurse, even if he has to abandon his own father. He's protective and a bit domineering, but Tsutsui seems to need a partner like that. Even though the plot is predictable it’s still an enjoyable read. 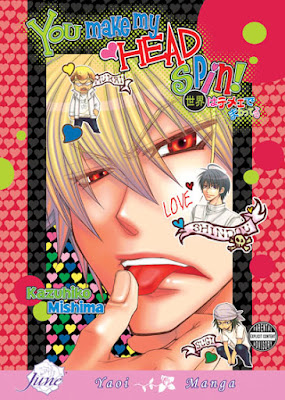 Sensei, story and art by Kazuhiko Mishima, is a short written in two parts from the book You Make My Head Spin. A young boy Mimori over hears his, seemingly crabby teacher, on the phone. The teacher has just been dumped and is very upset. After the initial shock of learning a man instead of a woman dumped his teacher, Mimori still offers support and encourages his teacher to be strong and move on. It’s a touching shonen ai and it would be awesome if the mangaka expanded the story—perhaps give Mimori his just reward. 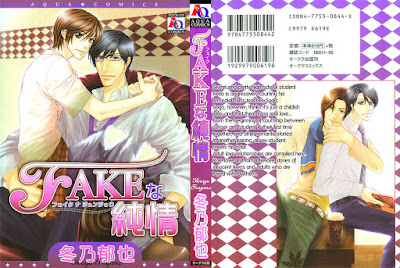 Fake na Junjou, story and art by Fuyuno Ikuya is a quirky mature yaoi. In this story, once the teacher Soga, readily accepts the romantic advances of his male pupil Keita, he promptly pops the teen’s cherry. I’ve found with most yaoi that use the teacher/student trope it’s usually the student who becomes the seme. But in the case of Soga, he is definitely the top. He’s bigger, competent, and knows exactly what he wants, and once they wind up in the sack he happily devours Keita. Almost literally speaking. There’s no playing shy in Fake Innocent Love. It’s simply ‘I like you and I’m gonna do you!’. Keita is the soft one, a little introverted and certainly meek compared to Soga. But he's determined to do anything the man's asks. And that's what makes him a wonderful character. 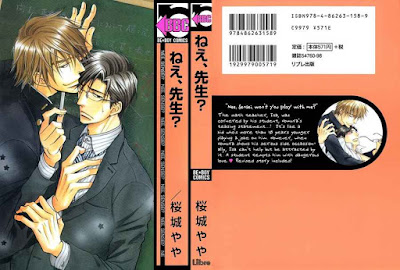 Nee, Sensei by Yaya Sakuragi is another teacher/student story but with a bit of a twist. The math teacher Isa’s first girlfriend is his student Homura’s older sister Kaori. And when Homura was young he admired Isa, and fell for him because he was the only person who took a genuine interest in him. Homura is a big sweetheart and sees everything through rose coloured glasses, especially when it comes to Isa. No matter what he does he faithfully keeps the teacher in mind. Isa has no self-confidence and it takes him a while to readily accept their relationship. But in the end they become a loving and close couple. All in all Nee, Sensei is a pretty good story!