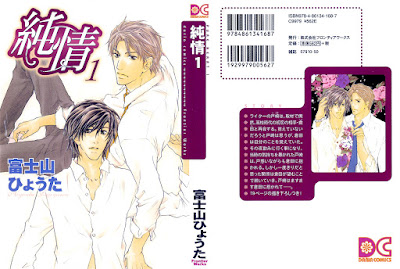 Usually when I take a break from writing, I will read, for instance when dinner is cooking. So, far I’ve got one novel on the go and, of course, I always throw in a manga. And last night I picked Junjou or Pure Heart, story and art by Hyouta Fujiyama. This yaoi is listed as a romantic drama, and trust me, it is.
After the first few pages I almost put it down and that’s due to the over used high school trope: ‘classmates meet years later and fall for one another, the unrequited love syndrome, along with a gay man falls for a straight man’, all rolled into one. But I like this mangaka and have thoroughly enjoyed many of her other works. So, I continued to read. It turned out I couldn’t put Junjou down.
During high school, Tozaki falls for fellow classmate and track-and-field star Kurata. Kurata was straight and they weren’t friends. Tozaki just watched his first love from afar expecting nothing, and then one day Kurata was suddenly transferred from the school. There’s a little more to their interaction during high school, but I’ll leave it at that. 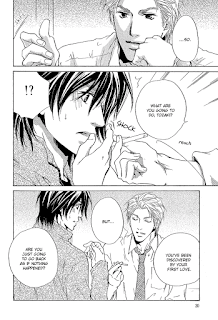 Years later they meet again through work. Tozaki recognizes Kurata immediately, and he’s nervous to work with a man that he once had feelings for, which is understandable because he never really stopped loving him. Tozaki is confused and tries his best to keep his identity a secret. But, unfortunately for him, Kurata knows they went to school together, and from that moment on their working relationship as well as personal interactions spirals out of control. Kurata forces his sexual needs on Tozaki, unable to equate his own feelings, and because Tozaki is such a sweet and thoughtful man, he can’t seem to say no.
I didn’t care much for Kurata at first. He came across as a cold and indomitable individual who seemed unresponsive to Tozaki’s feelings. But as the story progressed those poor personality traits of his became his saving grace. And once Tozaki gave his full support, Kurata transformed into an extremely passionate man. 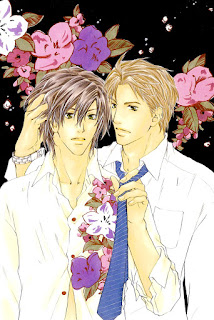 Junjou is unquestionably a drama, and a very good one. I could tell the mangaka really cherished her characters because of the time she took to develop their personalities. I was totally enthralled with each man’s life and where their stormy romance would lead. At one point, I honestly thought with all the outside interference they wouldn’t make it. If you read Junjou you’ll understand what I mean. There comes a certain point in any story, where you know, as the reader, it’s either do or die, so-to-speak, and whatever the character’s decision, there’s no turning back; the big climax. And that’s how I felt with this yaoi. At approximately thirds of the way into it, I just knew Kurata had to do something or Tozaki would walk away. Everything about this manga is excellent: the characters, art, plot and dialogue. So, if you can handle the ‘high school’ trope, you should enjoy it as much as I did. 5 stars!