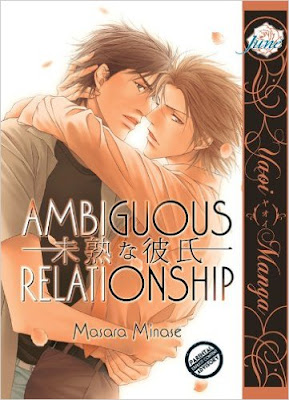 Ambiguous Relationship, story and art, by Masara Minase is a collection of one shots. Most yaoi readers can easily identify Masara Minase’s work, she has a very unique drawing style and she’s been in the business for years, and has a long list of manga to her credit.
Ambiguous Relationship: Office worker Satoru comes home to find runaway high school student Reiji sitting on his stoop and takes him in, a complete stranger. Reiji forces himself on Satoru and then of course they fall for each other. Yeah, you know the rest.
Hold On To Me: Continuation of the first story.
Trade-Off: Kazaoka’s boss pays his parent’s medical bills then demands sex in return. The boss dies and his son Mahito takes over, makes Kazaoka is assistant and proceeds to do the same as his father. It doesn’t take a rocket scientist to figure out the rest.
Man On: Ohno and Nagumo are soccer players. Nagumo is Ohno’s sempai and team leader and nags him the hardest. Ohno has a thing for him and one day gets pissed and takes him kind of forcibly in the locker room. Of course, that’s bullshit because afterwards, it’s a miracle that Nagumo actually likes him too! Yeah, you know the ending to this one too.
More Than a Child, Not Quite an Adult: Dr. Waka is a pediatrician and he’s got one patient Kotaro, a high school student, who is too old to be seeing him. Kotaro pursues the good doctor, and eventually after talking to a colleague, Dr. Waka gives in to the over grown young man.
Sweet Restraint: Atushi meets Fukami as a child and the man ends up taking care of him (raising him kind of) due to an agreement between Atushi’s father and Fukami. When Atushi reaches eighteen, due to circumstance, he lives with Fukami and the older man takes advantage, forcing his feelings, but then finds out Atushi loves him the same.
Miracles Don’t Happen: Ohsuga’s superior at work Mr. Ando, invites him over for drinks and then asks him for sex under the assumption that they’re obviously attracted to one another. In the morning, Mr. Ando gifts Ohsuga and the younger man understandably freaks out because that’s not how he viewed their liaison. Ohsuga, against his better judgment continues to service Mr. Ando and falls hook, line and sinker for the seemingly heartless man. But there’s a twist. The man isn’t as cold as he acts.

Masara Minase’s art is good and some of her characters showed a little promise. But on the whole, I wasn’t impressed with this group of one shots because half the stories used nonconsensual sex, which like I mentioned, has begun to drive me insane. Also, the mangaka used the same tropes everyone’s seen a million before which made every plot predictable. Sadly, only two of the one shots were decent: More Than a Child, Not Quite an Adult and Miracles Don’t Happen. I realize that “one shots” aren’t generally meant to be Pulitzer Prize winners, but at the same time I’ve read some that are extremely well done. This isn’t a reflection of Ms. Minase’s work, she’s created some really awesome stories, and several are my personal favourites. In the end, I didn’t know what rating to give this anthology, but finally decided on 3 stars.