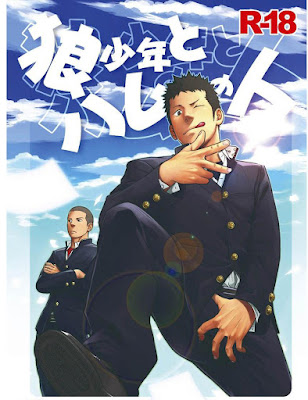 According to Wikipedia: bara, also known as the wasei-eigo construction "Men's Love", is a Japanese technical term for a genre of art and fictional media that focuses on male same-sex love, usually created by gay men for a gay audience.
The characters are usually very masculine, which means more muscular and they can be hairy, and at times the stories contain more violence. This isn’t to say that yaoi doesn’t contain violence. But it seems bara readers prefer the rough sex scenario with less story. Regardless, I’ve noticed the line between yaoi and bara has blurred in recent years, which I believe is due to the fact that people constantly get them confused and each attract male and female readers alike.
Anyway, I don’t usually review bara stories. However, having said that there are a number of them I’ve thoroughly enjoyed. It’s kind of nice to wash the hopeless fluffy neurosis caused by yaoi from the brain once in a while and read something different. In the case of Ookami Shounen To Hamu No Hito by male mangaka Mentaiko, I was initially captivated by the jaw-dropping art and later by the touching story. 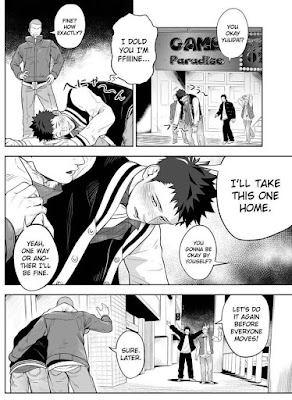 BCB:
Yuudai is a "in the closet" gay. He puts up a straight perverted front for everyone. He is so used to lying he can't confess and come out to his crush, Kimikazu. One night however, after a drinking party, Kimikazu shows his interest... Will Yuudai be able to be his true self?


Over all, the look and feel of Mentaiko’s work is bara, but the story reads like a yaoi. At least that’s how I feel. So, if you’re drawn to graphic sex and also favour well-written dialogue as I do then I’m positive you’ll find Hamu and the Boy Who Cried Wolf a worthwhile read. The characters are wonderful, true to life—scared, uncertain and in the experimental phase of their awakenings—totally endearing. And thanks to those wonderful qualities the artist could easily pen a second part to the story. But, unfortunately, for now, it will remain a ‘one shot’. It's been a long time since I've read such a realistic and masculine story. Loved it! 5 stars!
Happy Yaoi Hunting!
Blak Rayne
Posted by Blak Rayne Books Blog at 11:35 PM