Welcome to BRB, everyone! If you're an author you'll know the term "free-fall writing" or what many refer to as the pantser writer. And in my case, I prefer free-fall. I've never cared for plotting because inevitably it disrupts the flow of my thoughts. Similar to writing with a pen versus clicking the keys on a keyboard. Sometimes the old fashioned way works better when I want to get my ideas down quick without distraction. I'd say ninety percent of my novels, published to date, which includes my Devotion and Benevolence series, were originally written using this method. The only time I do somewhat create a plot outline or keep notes is when there is a significant amount of pertinent information to remember: character names and their physical traits, family trees, etc. Of course, when it comes time to edit, the rules change. Sections can be rewritten and I may even jot down chapter summaries to make sure the story reads cohesively from beginning to end.
Older the Better is a free-fall. And, as it turns out, it's become a personal favourite. The story just seemed to flow from the first page to the last. And it's received exceptional reviews from the local gay community. As I discovered, a close friend and fellow author, who is gay, purchased it and read the entire novel to a captive audience. According to him, the men loved it. *wipes brow* Honestly, when he told me, I was over the moon. It's hard enough to write about the opposite sex, but when the man is gay.... Yeah, you get the drift. Enjoy! 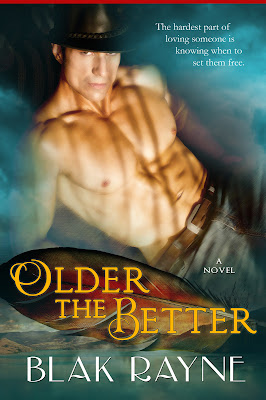