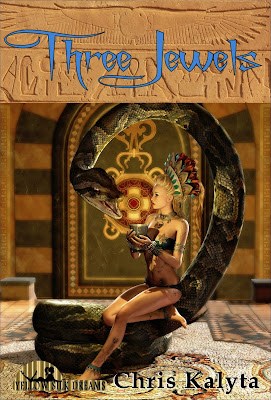 Three Jewels, an erotic adventure set at the beginning of Ancient Egypt's 3rd Dynasty, takes place in a land populated both by primitive people taking their first steps toward civilization and by mythology.  Evil Set has risen in Nubia and turns his gaze upon the gleaming treasure that is the Land of the Nile, and all he comes across fall under his spell.  As chaos threatens the very existence of Egypt, can Imhotep, King's Vizier, free his sovereign and all those he cares about from the iron grip of this immortal foe?  And what of the task set for Imhotep by the First Queen of Egypt?  Can he select one wife from three innocent women, knowing that the two he does not choose will be put to death?

Excerpt:
Imhotep's mind was awhirl as he left the King's chambers, and this was not the first time in his life that his mind had raced along so many roads at the same time.  He was surprised when a gentle hand interrupted his thoughts, though.  Few would dare to interrupt the king's vizier while he was concentrating, and he had often used this hallway because few others ventured along it.
"Imhotep," purred Queen Nefetra, as she stepped out from behind a column, her hand sliding across images of animal sacrifices.  She had changed clothes since Imhotep had spied her in the throne room, and her new attire was made of the most shear fabrics and lacked her normal ostentatious taste in jewellery, hiding no part of her from his wandering eyes.  "I had hoped to have a chance to talk with you."
Imhotep bowed low.  Then he stood straight.  "I am honoured, my Queen.  How can I be of service to King Netjerikhet's second wife?"
Her dark eyes flashed.  Then, she smiled.  "Have I not always been nice to you, Imhotep?  Nicer than cruel Nebti?"
He stiffened.  "Queen Hetephernebti has never been cruel to me.  I am honoured to serve so holy a family."
"You know what I speak of, Imhotep."  She walked slowly around him, but each warily kept their eyes on the other.  "Look at what she has subjected you to today.  You must choose a wife.  Two innocent girls are to be put to death, because you choose a third.  And such lovely young women!  How will that weigh upon you when their heads roll free upon the cold stone floor or when their limbs are twisted off by ravenous crocodiles?  Is that really the proper way to treat the king's vizier?"
"I am not privy to the plans of the king and queen.  One might as well ask to be privy to the thoughts of Ra, or Horus."
"Oh, come now.  A clever man such as you must have come to some conclusions about what passes through the minds of your masters."  She stopped in front of him and crossed her arms across her chest, lifting her breasts a little.  She smelled of exotic spices.  "Three women to stay with you, one after the other?  You, who has always been too occupied to enjoy the pleasures offered by my sex.  She means to sap your vitality, Imhotep.  She means to make you weaker, to render you impotent.  She fears your connections with the king.  Can you not see that?"
"I am loyal to the king."
She came closer and her breasts barely touched his robes.  She whispered, "Do you not see that we could be of service to each other?  Think on what might happen were my charms coupled with your intellect."  She leaned against him until he could feel her breasts press the fabric of his robes against his chest.  "We might make a hot fire together, Imhotep, a fire that would sweep across this land and leave a fertile soil in which we might plant our seed."
He took a step back, and suddenly remembered to breath.
"Think of what Egypt could be like, Imhotep.  And then come to me if you feel the need."
She gave him a sly smile, then slowly spun on her sandaled feet and walked away.  She did not look back.
Imhotep watched her go, then took several deep breaths and was glad for the fact that his robes hung loosely over his body.  Queen Nefetra had spoken blasphemy about the king, but she had also awoken something within Imhotep, at least temporarily.

https://www.smashwords.com/
Posted by Blak Rayne Books Blog at 10:13 AM