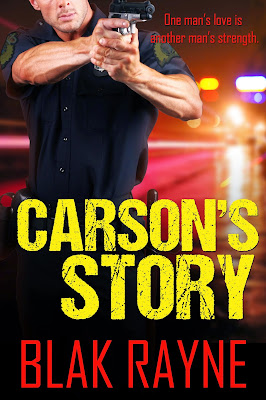 Welcome to BRB, everyone! I've finally finished my next novel. It will be available for purchase before the month end after it's formatted for distribution. Carson's Story is the third in the Stephen and Carson series. Which is just my label, because the series doesn't actually have a formal title. The first book is The Ideal Side of Love, and the second book is The Ideal Side of Life. The first two books were written from Stephen's somewhat neurotic perspective. And when it came time to pen the last in the series, I decided it was time for a change and switched to Carson's more level-headed and laid-back POV. I hate to admit it, but out of all the character's I've written, his personality is probably the closest to mine. But that doesn't exclude Reeve (Devotion) or Sloan (Benevolence Series), characters with certain personality traits that are also eerily similar to my own. I have tendency to identify better with semes (yaoi) or the more dominant male leads, not that I domineer people, but I've been told I have a more masculine perception of life. Thanks Dad and all my brothers! Ugh!

I thoroughly enjoyed researching and writing these books. I'd always wanted to write a gay romance with a police officer in it. And I thought who better than an RCMP officer, because they're a well recognize police force in this country and world wide. And since my best friend's husband is an RCMP officer, I couldn't go wrong. He was thrilled to help me. So, thank you, Jason! I was supposed to do a ride-along as part of my research, but it had to be postponed. Anyway, I still plan to go. And if he'll let me, I'd love to take pictures, and I will definitely write a post about it.

Another steamy excerpt will be posted later this month. But for now, I hope you enjoy the first teaser excerpt!

A twenty-year veteran of the police force, Carson Mackenzie has worked hard to carve his niche in a demanding environment where stress is the operative word. Thanks to his occupation, he’s never relied on anyone, not even his husband Stephen until he’s involved in a severe car accident while on duty one night. His recovery isn’t smooth; reoccurring nightmares of the crash play havoc with his mental health and he starts to experience a new kind of stress—something he’s never dealt with, anxiety.


Adding to his problems, Dudley Kramer corners him in a restaurant, a shady art dealer who almost ruined his marriage and career once before. Arrogant and self-serving, Dudley wants sex and he’ll do whatever it takes. Too ashamed to ask for help, he tries to handle the situation alone but quickly discovers the art dealer won’t take no for an answer.

Rapping a knuckle on the office door, I poked my head inside the room. “Can I come in?”
He removed a pair of dark-rimmed reading glasses that made him look like a professor, folded his arms and placed them atop a magazine on the desk. “Of course, hon.”
Moving the other chair from the corner, I sat in front of him and bent forward, elbows on my knees. “It won’t take long.”
“That’s fine, I was only reading the financial column.” He rubbed his face and leaned back with a yawn, tilting the chair. “The economy’s going for a shitter, so it was boring as hell. What’s up?”
“There’s something I’ve been meaning to tell you.”
“I don’t know if I can handle all this honesty—I almost miss the old, stoic you.” He chuckled, then after a moment exhaled a sigh. “I was only teasing, hon, go ahead.”
“I’m sorry. It hasn’t been easy for me either. I’m not used to discussing work…never wanted to bring it home.”
“Gotcha. Don’t worry.” He reached over and gave my shoulder a gentle smack. “Start talking.”
“It’s about Dudley…he’s been accused of more serious crimes.”
“Okay,” he said slowly, studying my overall expression. “I can’t get a read off you this time. What type of crimes are you talking about?”
“Illegal drugs and rape. Several men lodged complaints. Each had been given a date-rape drug and was sexually assaulted in the art gallery…under the guise of art showings.”
Stephen rested his head on a tight fist and searched my eyes. “Those are pretty serious accusations—not that I’m surprised. The guy was kind of strange in college.”
“When you first introduced him to me, you said he was an okay guy…?”
“No, hon,” he contradicted politely. “What I’d actually said was he’d never done anything wrong in college that I knew of. Anyway, what does all this have to do with you?”
“Not long ago, Staff Sergeant Leland asked me to participate in an entrapment case against Dudley—”
“Because we’d experienced a similar incident at the art gallery, and because Dudley is attracted to you, you’d be the perfect bait.”
I wasn’t surprised he understood; Stephen is highly intelligent. “Yes,” I replied quietly, squeezing my hands together. “That’s why I’ve been out of sorts. It caused a lot of added stress.”
“Undue stress. Well, I trust you told Leland to blow it out his ass.”
“After what happened at the grocery store, yes.”
He rubbed a finger on his lower lip and said with mild indifference, “What goes around comes around and Dudley the Asshole Kramer will get his. But, at least not through you.”
“No thanks, I’ve had my fill.”
Rising from the chair, he stretched. “I’m heading to work.” And brushed past me.
“That’s it…?” I followed him so closely I nearly tripped in to him.
“I won’t be long.”
“Not that, Stephen. I’ve got a shift myself.” I gestured back to the office. “I just poured my heart out, and no kiss. Surely that qualified as a kiss moment.”
Stephen spun around, grabbed my shirt and yanked me close, his intense gaze searching mine until my cheeks got hot. “Right, well, maybe you need more than a kiss,” he insisted brazenly and my stomach fluttered. “Maybe you need sex.”
I wanted to say yes, shout it out, and then I finally found a little courage and said meekly, “Maybe I do.”
He paused with his mouth an inch from mine; his brows furrowed. “Are you teasing me?”
“No.” I swallowed and my pulse rose with the anticipation.
“What about work?”
“I’ve got fifteen minutes before I have to leave.”
He gave me a kiss and grinned. “Oh, I could definitely rock your world in fifteen minutes, trust me, Mr. Stud Muffin Cop.”
My cock stood at attention as he dragged me to the other end of the house, pushed me onto our bed, kicked the door shut and loosened his tie.