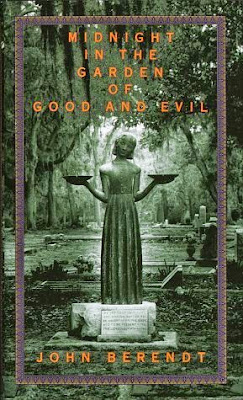 Welcome to BRB, everyone! I guess it was bound to happen sooner or later, but I’ve finally read a book that I can honestly say I didn’t care for and its only redeeming quality was the author’s ability to write. Period. And when I say write, I mean he penned page after page of incredible description, which included a long list of eccentric and supposedly real life people. I understand that on occasion an author will obscure things—a character’s identity or motivation, location, and even the plot for various reasons. And I also understand why this book was pieced together as it was, considering it’s sold as a true crime or non-fiction novel that captures real-life events. But when the author writes from a first person narrative and I have to guess their sex, occupation and reason for their presence and why they’re even telling the story until the middle of the damned book, I don’t think it’s a literary accomplishment, I think it’s a complete turn-off. Welcome to the world of Midnight in the Garden of Good and Evil by John Berendt; for such a highly praised book that I felt compelled to read, the only good part about it was the hilariously crude dialogue spouted by the Lady Chablis, and truthfully, I think that was the only reason I finished the book.
*Wikipedia:
The action that serves as a catalyst in the book is the killing of Danny Hansford, a local male prostitute (characterized as "a good time not yet had by all") by respected antiques dealer Jim Williams. This results in four murder trials, with the final one ending in acquittal after the judge finally agreed to move the case away from the Savannah jury pool. The book characterizes the killing as "self-defense"; the result of a lovers' quarrel between Hansford and Williams; and not murder, pre-meditated or otherwise by Williams. The death occurred in Williams' home, which was originally built by an ancestor of songwriter and Savannah native Johnny Mercer, West Point graduate and US Army and CSA Colonel Hugh Mercer (whose grandfather was Hugh Mercer of Pennsylvania, hero of the Battle of Trenton and adjutant to General George Washington of the Continental Army).
The book also highlights many other notable Savannah residents, most notably The Lady Chablis, a transsexual woman and local drag queen and entertainer. Chablis provides both a Greek chorus of sorts as well as a light-hearted contrast to the more serious action.
I didn’t watch the movie, although recently several people informed me it’s a “must watch”. Well, “must watch” or not, if the movie is in any way similar to the novel and it drags on and on, then I can’t be bothered to view it. Whether Danny’s death was a case of self-defense or not is strictly a matter of opinion, and after I did a little research I don’t know if I agree with the author’s perspective. Anyway, the book didn’t impress me, so it only gets two stars.