A Walk on the Wild Side #promo #sexy #romance #mustread 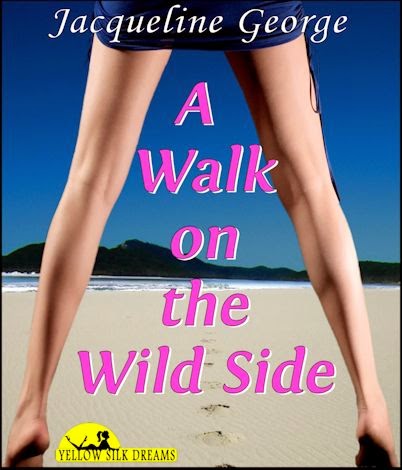 You don’t have to peep far into the underworld of modern sex, erotica and pornography before you come across transsexuals or shemales. These are individuals who live in the debatable lands between male and female, straight and gay. Mostly they are people who have been born physically male but feel female. They want to live like women, enjoy fashionable clothes, make-up and sexy shoes. They love fine lingerie, and long feminine legs in nylons. They want to act and appear as women. Their figures are softened by taking hormones, body hair is permanently disappeared, and they often enhance their juvenile breasts.
Fine – but I don’t know any. At least, I don’t think I do. How do I know what a passing woman has hidden in her panties? And there are so many of them on the internet. Why? What is so interesting about these women who are, well, not quite normal?
Ah, well, there hangs a tale. Or tail, if you prefer. You and I know that a well-behaved penis is a very fine thing. They are fascinating, and the ultimate plaything. Hold a penis and you have your hand on a lever of power over its owner. You can do so much with it, and make him eternally grateful for your attention. Who doesn’t love to put them through their paces?
Men, of course. Except for their own, penises are a foreign country. They might peep at other ones in the shower or on a nude beach but, however much they might enjoy it, they are never going to reach out and let a soft one grow hard in their hand.
Except… if they could get their hands on a girl with a penis, well, that would be alright, wouldn’t it? No fear of being seen as gay then; their partner is soft, and has long hair and breasts. She is just a little different in the panty department, and a man can try all sorts of different things. Like a properly mutual 69, for instance.
And there is another plus; this baby has balls, and probably wants sex as much and as often as he does. Now there’s a thought…

Excerpt:
Evening in Jakarta, and Tim has been stuck with the job of nurse-maiding the new man, William. William is easily shocked, and lost in the new world of Indonesia…
They passed the grandeur of the British Embassy and into a drab side lane. Their restaurant stood alone amongst darkened offices on one side of the street.  On the other was only the embankment of the raised main road.  The darkness and nearness of big western hotels made it a favourite gathering place for billy-boys.
“Hey, look at that!” William was looking at a couple of girls walking arm-in-arm towards them.  They certainly knew how to catch a man's eye.  Flowing hair, obvious jewellery, dresses more glamorous than elegant.
“William, my son,” he said, “Leave them alone.  They are not proper girls.”
“But...”  William was confused.  “But...”
“They're billy-boys, William.”  Where another man might have been intrigued, William was shocked.  Goodness knows why, thought Tim.  He's lived out here long enough to cotton on.
Poor William.  His talent as the world's natural butt was so obvious that even the girls picked it up.  They focused their attention on him, ignoring Tim.  William tried to shelter behind his friend, but it did no good.  His confusion was obvious and the night did not hide the fact that he was turning red with embarrassment.
“You like me, big boy?” asked one of them, “You like pom-pom?”
“Er – I'm sorry…”  William started stuttering.
“Look, I'm real lady,” She unbuttoned the top of her dress to show two firm, sculptured breasts with tight, brown nipples.  “You like these, big boy?  You touch.”  She moved nearer and reached for his hand.
William gave Tim a look of despair and, seeing no hope, he turned and ran.  With shrieks of delight the two girls gave chase, their skirts hitched up, hair and hand-bags flying.  Back towards the bright lights the three raced, William keeping only a short lead.  Waves of mocking laughter echoed in the narrow street as passers-by joined in the fun.
Tim stood alone, laughing out loud.  William should not be allowed out without his parents.  Then he smiled. He would be much better off dining alone.
He had nearly reached the restaurant when he saw a movement in a dark doorway.  “Hello, Mr Tim.”
Jane wore the same outfit as the evening when she had surprised him at the ship's rail.  Even in the half-light she looked stunning.  Natural beauty, of course, but a dress that on a normal girl would have looked simple or perhaps chic, looked racy and enticing draped around Jane.  However she did it, her heavy sexual aura was unmistakable, and impossible for a man to ignore.
She looked at Tim expectantly.  “OK, OK.  Come and have dinner with me.”
“Thank you, Mr Tim. You are very good man.”  Without waiting for a further invitation, she slipped her hand under his elbow and walked beside him, high heels tapping the pavement.  It felt natural, but at the same time the unnaturalness sent a sinful shock through him.  He became acutely conscious of the tall, slim figure beside him, of her perfume and the swish of her stockings.
They attracted attention in the Chinese restaurant.  Jane in full battle-dress would have attracted attention anywhere.  The waiters did not know whether to be amused at the prospective surprise awaiting the ignorant kwailo foreigner at the end of the evening, or whether good manners demanded that exotic sexual tastes should be discreetly ignored.
Jane had no doubts about how to behave.  She swept into the room behind the usher and allowed a waiter to slide a chair under her without acknowledging his presence.  She looked so regal, Tim ordered champagne to toast his companion.
A waiter scuttled out with the ice-bucket and twisted out the cork with a soft pop.  Jane's eyes sparkled as the golden foam splashed into their glasses.  Tim raised his glass. “Here's to the Queen of the Java Sea!”  She giggled and raised her glass to clink against his.
There are times in a man's life, brief moments for the most part, when the tide of happiness flows without a ripple and the troubles of the world refuse to intrude.  Later, when he looked back, Tim realised that meal in its simple perfection was one of those rare moments.  Even the little old Chinese waiter in his starched white coat seemed to catch the atmosphere and stood nodding happily as they raised their glasses to each other.  The meal passed timelessly.
Afterwards, outside on the street, Tim was uncertain how to end the evening.  Jane, the beautiful woman stood beside him, but in reality she was a billy-boy.  She sensed the doubt in him and over-rode it by waving for a taxi.
“We go to your house and I give you a massage,” she said firmly.  In the rattling car with its frayed seats and square wheels, she held his hand on her lap but said nothing.  They arrived home too quickly for Tim to collect his racing thoughts.
He paused at the gate.  “Come in and have a coffee with me.”
“OK.  A coffee.  And after I give you a massage.”
“No.  No massage.” 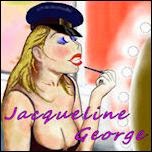