Welcome to BRB, everyone! Today, I’ve got a couple of book reviews to share; both short and sweet…or maybe not so sweet, it depends how my opinion is perceived. Anyway, I will get started with the first review. 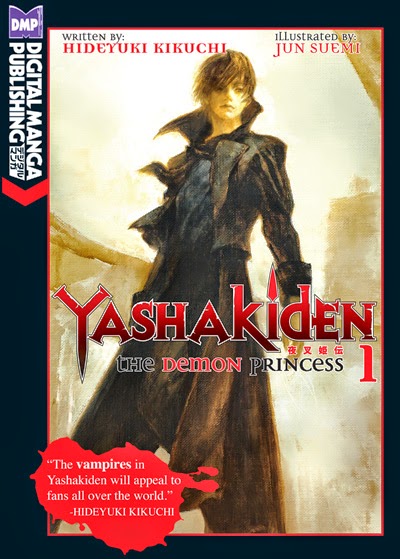 Yashakiden The Demon Princess 1, written by Hideyuki Kikuchi and illustrated by Jun Suemi, is a manga novel about vampires, Chinese Vampires to be precise. The beautiful man hunter and Shinjuku’s best private detective, Setsura Aki, works alongside Doctor Mephisto to capture the vampire princess and her three, blood-sucking peons before they destroy the city and put everyone under their spell. It’s the first instalment in the series and, unfortunately, the last I will read. I really had a difficult time finishing this book, and it wasn’t for lack of trying, but I found the head hopping and chapter set-up a brain drain; it’s still unclear as to what the editor and/or author was trying to do. Plus, though eloquent as it was, the over usage of metaphors and heavy description became tiresome.
The author is, without a doubt, creative when it comes to describing the interaction between his characters and the milieu, but I found half of it unnecessary and a distraction from the actual story. I know that sounds strange, but I don’t know any other way to explain. Adding to that, the plot was predictable and the dialogue mediocre at best. On the flip-side, the characters were wonderful, especially the vampire princess, frighteningly grotesque as she was gorgeous, and Setsura, just not wonderful enough to carry the entire novel. I do feel bad, but my expectations were dashed, so Yashakiden The Demon Princess 1 gets 1.5 Stars; it’s only redeeming qualities are the illustrations and characters, the rest I just couldn’t get in to. 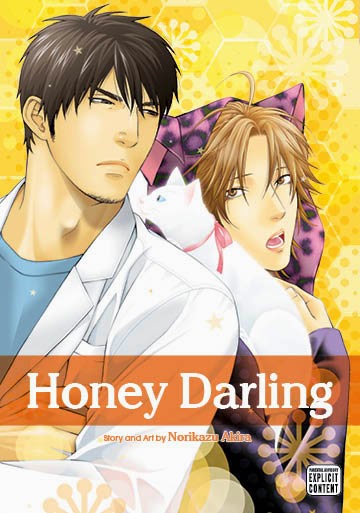 'Chihiro drifts through life with no purpose, going from girl to girl, until one day he finds an abandoned kitten in a box. He quickly falls in love with little Shiro and couldn’t imagine his life without her. One evening, Chihiro finds Shiro has fallen ill. While searching aimlessly for an animal hospital, he runs into Kumazawa, a local vet who takes Shiro into his care. Watching Kumazawa in action, Chihiro realizes he wishes to learn the value of life and asks Kumazawa to consider hiring him at the vet clinic. Kumazawa agrees, but only if Chihiro serves as his live-in housekeeper. Has Chihiro finally found his purpose in life, or will living with the handsome vet be a little too much to handle?'

Honey Darling, story and art by Norikazu Akira, is a delightful yaoi manga with a contemporary setting, simple but attention-grabbing plot, excellent character development and beautiful art. It’s also got hot, romantic sex! And when I say hot romantic sex, I mean the author did a tasteful job. This is the first yaoi I’ve read in a very long time where the characters act like intelligent adults, take time to get to know one another, and treat each other with respect in the bedroom. The sex is consensual and truly an act of passion and love rather than lust. Kumazawa isn’t a typical seme, he’s reserved and normally dates women, so he doesn’t show any feelings toward Chihiro until much later when he begins to appreciate and depend on him. Chihiro isn’t the typical uke either; although he looks more effeminate, he doesn’t act like it. I love both men and the precious little cat Shiro that brought them together.
I thoroughly enjoyed Honey Darling, and I’m actively searching for more of Norikazu Akira’s work. If you’re a cat lover, yaoi lover, or just a big romantic at heart, you won’t want to miss reading Honey Darling. 5 Stars!