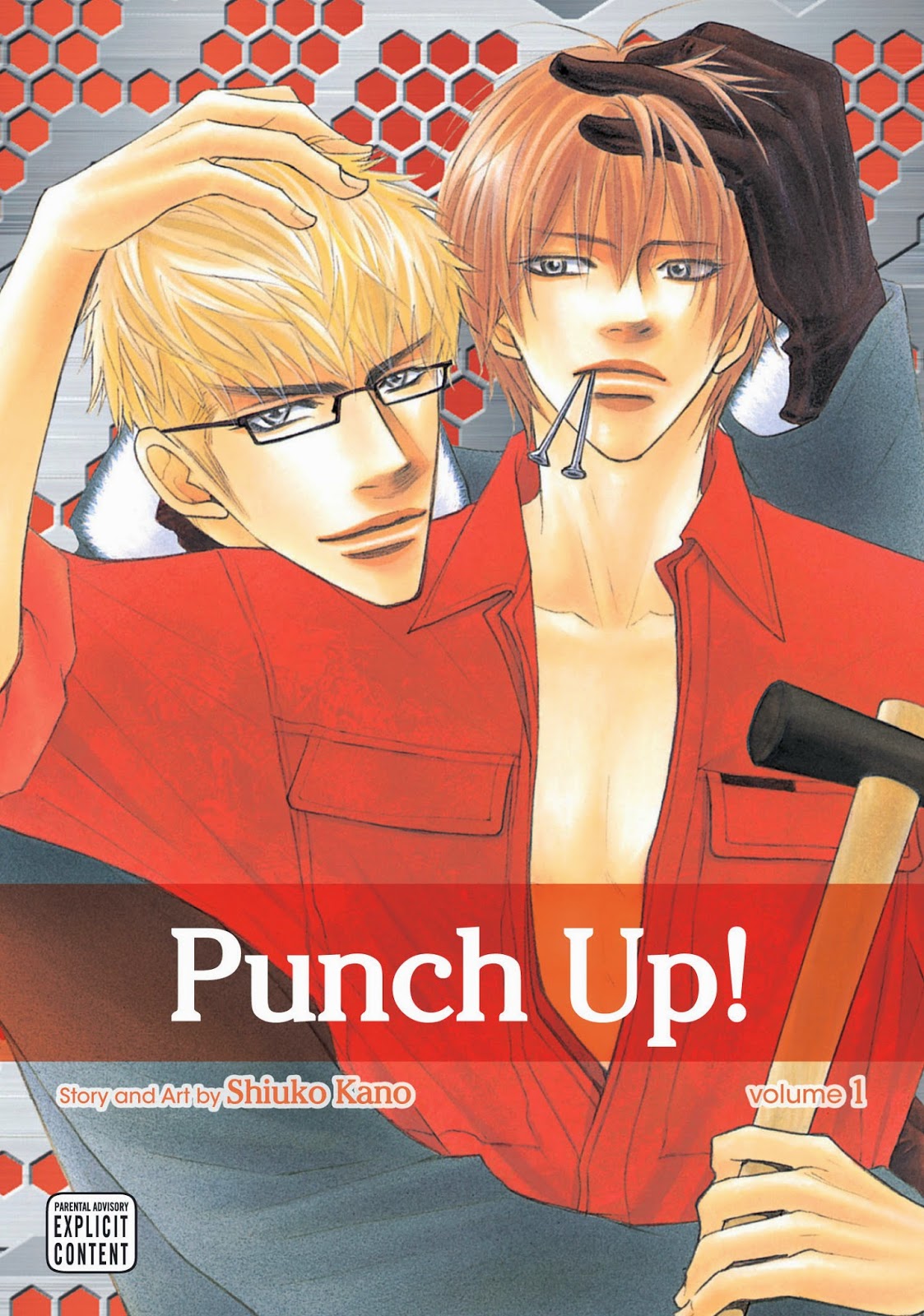 Punch Up story and art by Shiuko Kano is a yaoi manga series. Here’s a quick synopsis: Basically, an architect by the name of Maki Motoharu is at a construction site sizing up an attractive construction worker (because he’s a lecherous old man) when his cat Shinobu happens to turn up. He discovers an ironworker, Ohki Kouta, had been caring for Shinobu, and Ohki lost his home because of the cat. Maki feels responsible and takes Ohki in, allowing him to live at his place. Maki is a pervert with a wandering eye, and Ohki has a foul mouth and bad temper. They like each other, but have a long ways to go in the relationship department, which expands and develops further along in the series. Each has to make a number of sacrifices and learn to curb their bad habits. It takes Maki time to admit he loves the young man.

I purchased the entire series and read it in several hours. Initially, I’ve got to say Maki irked me; his sleazy personality, going for every guy and his sexual perversions in the beginning, were a real turn-off. I couldn’t tell if his feelings for Ohki were genuine or not, or if he was just an old dog trying to learn a new trick. Not to mention, I didn’t find him to be the most attractive seme. I mean Asami (Viewfinder) is drop-dead gorgeous, the iconic seme: ruthless and stoic, but has a soft spot for his prey. Another is Kei (Kizuna) a tough, no non-sense cutie with a wicked sense of humour, and then there’s Takano (Sekai-ichi Hatsukoi), a laid-back, mature sexy with brains. Those are the kinds of semes I come to almost expect, even though I realize some aren’t always that attractive, for instance: Sougetsu from Midare Somenishi; the guy was an abusive creep with a capital C. So, I’ve concluded it’s Maki’s personality that I didn’t care for, but grew to accept later. Ohki did tame the dirty letch and made him his own. But, unfortunately, the bliss didn’t last. Without spoiling the story, I will say something incredibly sad happens, which puts a serious kink in their relationship, and Maki’s love to the test. After the “sad incident” the entire dynamic changed between these two men, and that’s when I really began to appreciate Maki and see him in a new light. He had guts to stick it out. The only other thing I found irritating in this series was Maki’s nose; I won’t explain, but you’ll understand if you read it.

There is a ton of explicit sex in this yaoi, and an array of supporting characters, some with their own side stories. I can’t say that Punch Up will be added to my favourite list, but it’s definitely worth reading if you’re into yaoi. 4 Stars!