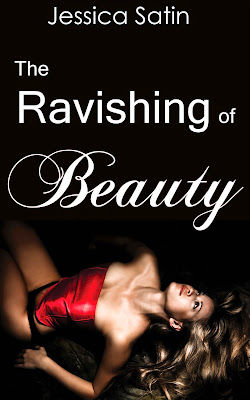 The Ravishing of Beauty
By Jessica Satin

Belle's choice to become the Beast's prisoner changes her in ways she never imagined.

After her Beast transforms back into his human form, they eagerly explore each other’s bodies. He can caress every inch of her and probe his tongue deep between her lips. She can feel the warm bulge of his muscles and run her fingers through his red-gold hair, but it’s not enough. Their sexual affair began long before he was human, and Belle can’t help remembering what it was like to be with her Beast. She learned to love him through all the blood and sacrifice it required. Belle and her Prince must learn to find new ways to express their desires.

Content Warning: This story was written to unlock your darkest fantasies and innermost desires. It is not for the faint of heart and is not your mother's erotica. All of the sexual descriptions found in this book are very explicit in nature. For readers 18+ only!

The concrete floor of Belle’s cell was cold and rough beneath her feet. Prince Adam had thrown her in here, again. He often did before ravishing her.
She took solace in the hard, gray walls and thick iron bars that held her there. The chaotic thoughts of her overactive mind eased away. Her mind was consumed by an acute awareness of her shivering body covered only by a transparent white chemise.
Although her Prince had transformed back into his human form just a few months ago, they had begun their affair long before. Just the thought of his incredible power sent hot tendrils of adrenaline shooting up her abdomen.
She thought back to their first time. She was in the library, sitting on the floor with her back against one of the many bookshelves and reading e.e. cummings’ erotic poetry. The words flowed hotly through her body and her vagina throbbed every time she read the words hunger, feel, touch, spine, killing, ow, oh no, come, divine, bones, and most especially, monster. She kept reading until her body was so overcome with arousal that she couldn’t focus on the words anymore.
She slipped her hands between her skirt and pulled her underwear down to her knees. She was already so wet her fingers slid between her lips. The smell of books filled her lungs and she arched backwards, displacing books as she delved further into her fantasy of her Beast coming in and taking over her.
When she came, torrents of pleasure flowed through her. A dark pool of cum and sweat marked the silk lining of her hot pink skirt. She felt perfectly relaxed. She opened her eyes and the library had a soft, hazy glow.
A shadow wavered from the corner of her eye. She looked toward it and saw the form of her Beast in the doorway. His large, bright blue eyes took her in. It was unclear how long he had been there, but she secretly hoped he had been there to witness it all.
She was always astounded by his appearance. He was nearly seven feet tall and appeared to be a mix of fearsome, beautiful creatures. His back was broad and curved like a bear, his paws large and clawed like a lion, his limbs strong and lean like a wolf. A pair of sharp teeth lay against his upper lip and deep brown, silky hair covered his body. Horns curved up over his ears. Despite his outward appearance, she sensed a brilliant humanity deep within him.
She also noticed his turgid cock bulging in his trousers. It was huge. Painfully big.
The Beast stayed in the doorway, watching his Belle, his Beauty, stare back at him. Her mouth was slightly agape, her cheeks glowed, and she was shameless about her exposed, wet pussy. Her smell filled his massive lungs with scents of a flourishing rose garden draped in sweet cum and sweat. His cock throbbed painfully against his trousers, begging to be unleashed and into her, into her everywhere. Ramming up inside her until she was drained of everything.
They had barely interacted before. He was intimidated by her. He could hardly do more than invite her to dinner and sloppily eat his meal while she watched, sweetly coaxing him into remembering his manners. His monstrous form was his constant torment. He read “The Ugly Duckling” over and over, hoping one day he would be handsome again. He tried not to dwell on her being his only hope for returning to his human body. If he thought of it too much, it would ruin him.
Even worse, she was as devastatingly beautiful as he was horrifyingly ugly. Her eyes were doleful and deep chestnut brown, flecked with gold. Her chestnut hair ran in waves down the long curve of her spine. Her lips were plump and a deep, rosebud pink. He often imagined how they would look stretched around his cock.
She was his only hope for reversing his curse, but how could she ever learn to love him? Her personality was all that gave him confidence. She was kind and quiet most of the time, but he sensed something twisted inside her. Something she wasn’t fully in touch with yet. It was territory to be explored.
“Stand up,” he said.