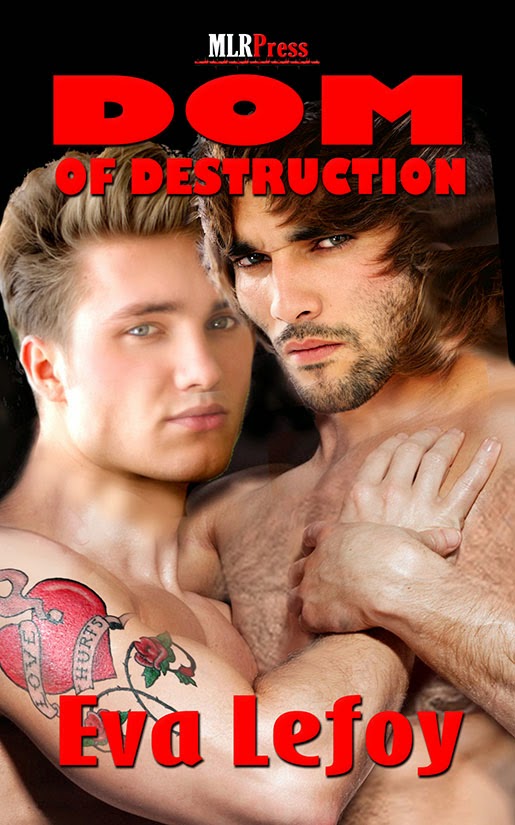 In book I, Sex, Ties and Videotape, we meet Geoffrey and Paul and Brian. To be blunt, Brian is sort of an ass. He makes fun of Geoffrey’s submissive needs and some would say, abuses him. (He takes a video of a scene with Geoffrey and puts it on YouTube). Yeah, a jerk.

In book III, Dom of Destruction, Brian flies off the handle when the Dom he wants – Gar – is not available. Not only is he not available, he’s got a different sub every night. When Brian leaves pissed off, he runs into a bad scene and now it’s his turn to be abused. How does he handle it?

Well… in the book Brian keeps most stuff pretty bottled up. He doesn’t take the abuse personally, but gets up and around as quickly as he can. His focus is on getting Gar, not processing what he’s been through. But at the end of the book, we can see Brian has some leftover issues. I predict he’ll deal with some pretty hefty aftershocks in book IV.

When new and impulsive sub, Brian is injured in a bad scene, the incident opens old wounds for his sometimes-Dom, Gar. While doling out revenge, Gar must come to terms with his fear of relationships and learn the shocking truth about his former lover, Angel.
Meanwhile, Paul’s uncontrolled jealousy of Brian comes to light and Geoffrey threatens to cancel their engagement if he won’t get his anger under control. In different ways the aftermath of the sadistic Dom’s destructive force puts these four men on the track to future happiness, but some will suffer more scars than others.

Gar guided their joined grip, up and down at a slow, even pace. Then he licked a finger and slid it under Brian’s sac, pressing inside his tight hole. Gar massaged his prostate in a firm, vibrating motion. Brian had never felt a touch like it.
“Tell me what you like best about the blond,” Gar panted in his ear.
“I like the fact that he’s helpless,” Brian whispered. “He’s at the other man’s mercy.”
“You want to be at my mercy, Brian?” Gar’s gruff tone resonated through his ear, down his chest, and straight to Gar’s finger buried inside him. “You want to surrender to me completely? Have me command you to come when and where I want?”
“Yes, God, yes.”
“Close your eyes and picture me behind you. You’re ready for me. So eager. So open. You’re begging me to fuck you.”
Brian closed his eyes, spread his legs, and moaned as Gar’s finger continued its little dance.
“Oh fuck. Brian, I want to give you what you want so bad. Just like in the video. I want to make you scream my name around my cock. Come, Brian. Come for me.”
“Gar!” Brian’s hips trembled as another orgasm tore through him. He wasn’t even tied up, but Gar’s voice reached a part of him deep down and gripped it like a vice. Brian surrendered total command of his body, heart and soul to Gar. Gasping for air, speechless, he’d never been so turned on in his life.
Next to him, Gar roared into release. The thick shaft vibrating in Brian’s hand widened and hardened as Gar came. He could feel every pulse of cum up Gar’s shaft, could hear it rise up his length, he released so hard. Brian looked down in time to see Gar spray all over his chest and savored the feel of Gar quivering beside him. The mingled smells of their emissions permeated the air. The spicy scent of Gar’s cum called to him. He wanted to taste it but his arm lay at too awkward an angle to bring it to his lips. “Gar, let me taste you, please.”
“Like this?” Gar swept a finger through his snowy white emission and pressed it to Brian’s lips. He followed up the finger with his tongue, lapping and teasing Brian’s mouth. Then he dipped his finger into Brian’s cum and did the same thing. Their juices merged on Brian’s tongue, salty, spicy, tinged with sweat and need.

Book I - Sex, Ties and Videotape:
Geoffrey begged his ex boyfriend, Brian, for some bondage, not public humiliation on YouTube. On Valentine’s Day, he runs into Brian's best friend Paul, who seems intent on righting Brian's wrongs. But trusting Paul means Geoffrey has to come clean with his needs … and his feelings.
Paul sees Geoffrey in the bar and knows this is his chance to convince him he’s nothing like Brian. He starts slow and safe, setting strict ground rules. But when Geoffrey insists on a reenactment of the same dom-play Brian used to hurt him, is a safeword enough to protect their fledgling love?

Book II - Kink Club Blues:
Paul and Geoffrey return from their special trip to Paris. Paul plans to propose to Geoffrey but first, his urge to protect his lover drives him to close an old loophole. He visits Brian, demanding the original video he made of Geoffrey be destroyed.
Brian doesn't understand what Paul's upset about, or his dominant streak. But the clearer Paul's feelings for Geoffrey become to him, the more Brian desires to have a man love him the same way. Curiosity draws him to the local kink club, and into the arms of a man whose punishment gives him all he secretly craves.

Author Bio and Contact:
Eva Lefoy writes and reads all kinds of romance, and is a certified Trekkie. She’s also terribly addicted to chocolate, tea, and hiking. One of these days, she’ll figure out the meaning of life, quit her job, and go travel the galaxy. Until then, she’s writing down all her dirty thoughts for the sake of future explorers.
Facebook: Facebook
Twitter: https://twitter.com/Eva_Lefoy
Pinterest: http://www.pinterest.com/elefoy/
Blog: http://writery.wordpress.com/